This week's game was the first at home for a while, but it was a cracker though I say so myself. Conrad, Dave, Paul S and Paul T came up for a refight of the Battle of Chotusitz, the last major battle of the 1st Silesian War, using the Honours of War rules. Although I'd played this battle before, as indeed had Dave, it was a while ago and none of the others had, so I expected an interesting, exciting even, game. I was not to be disappointed, and neither I trust, were the others. Dave was Frederick, assisted by Paul T as Dessau, while Conrad was Charles of Lorraine, assisted by Paul S as von Daun. I umpired and did the catering which by the end of the day was enough to have me flat on my back, albeit happily so with a gin and (not much) tonic reflecting on the game.

For those not familiar with the battle, the Austrians had managed to catch Frederick on the back foot and had surprised his greatly outnumbered rearguard under Anhalt-Dessau deployed around the village of Chotusitz. In reality, the Prussians were slowly pushed back and much of their cavalry destroyed, before Frederick with the main body arrived and turned the tide, halting the Austrian advance in its tracks. The latter withdrew, leaving the Prussians in possession of the battlefield.

i.         All Prussian infantry were classed as superior in the rules. Their cavalry was classed as standard. I made Frederick 'Dependable' in this game rather than the more usual (for the SYW anyhow) 'dashing'.

Austrian cuirassiers and dragoons were classed as 'superior' while the Croats and hussars were 'inferior'.

And so to the battle, one punctuated by some amazingly bad luck dice rolls, mainly from Dave, but not a few from Paul T, while the Austrians were slow to advance and got in a right pickle trying to control their extended infantry lines in the centre. Amazingly, it was turn 7 or 8 before the Prussians won the initiative for moving, and more often than not they also lost the shooting initiative test, despite their inherent advantage! 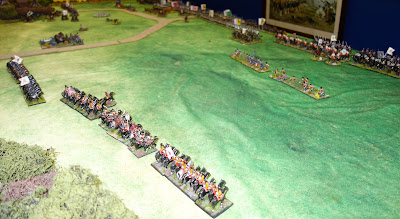 The Prussian left, facing around half of the Austrian army! 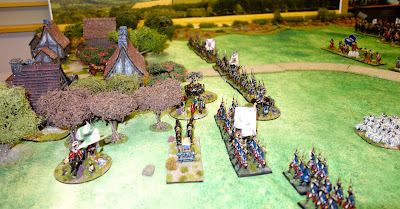 Prussians holding Chotusitz are pounded by the Austrian artillery. 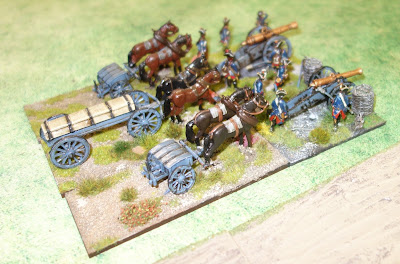 The isolated Prussian artillery battery in the centre. They did valiant work denying much of the centre to the Austrian army. 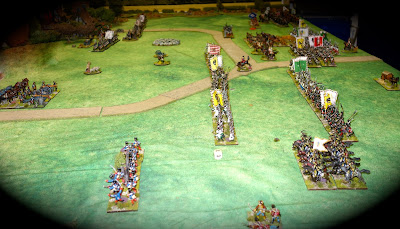 The rather disjointed Austrian attack in the centre, struggling to keep going as several battalions were out of command and failed to move. 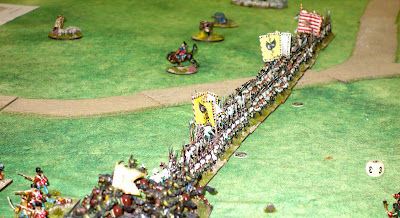 The Austrian front line finally started to take shape positioned nicely as they were within cannister range of the Prussian guns. 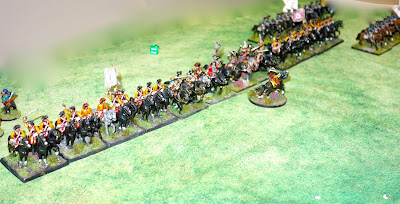 The Prussian right under Buddenbrock holds its ground in the face over overwhelming, but stationary, odds. 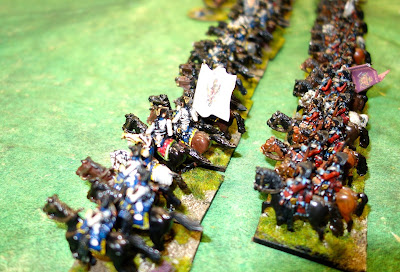 For some reason the Austrians decided to hold their cavalry back on their left flank, which may have lost them the chance to overwhelm the Prussians before Frederick arrived.

Some annoying and pesky Croats are driven off by a regiment of Prussian dragoons. Both Croat battalions were forced to evade and played no further part in the battle. 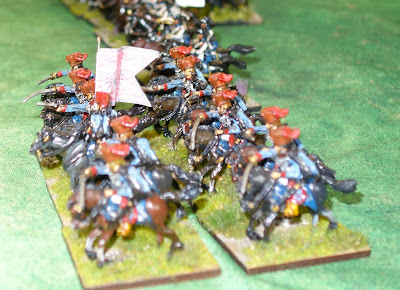 The Austrians finally let loose their cuirassiers and drove back the outnumbered Prussians, but not without loss. 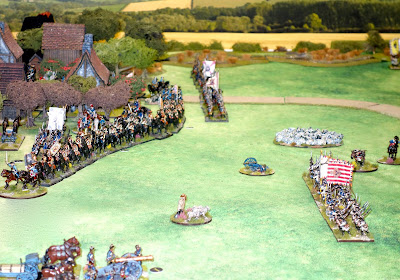 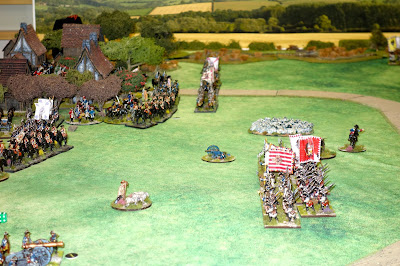 Paul T managed to get his cavalry on the table but a few failed command rolls meant that they were caught in column by the Austrian artillery and took severe damage, one regiment being broken, who quickly overtook the battalion of infantry that had broken the move before. 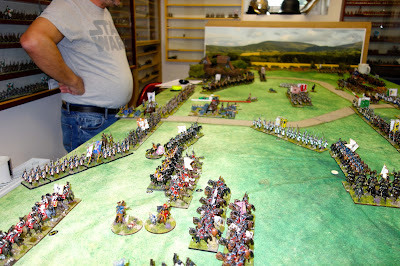 Turn 5 and Frederick arrives at last. Only the front line managed to get on the table, in time to see the Austrian cavalry bearing down on them at great speed! 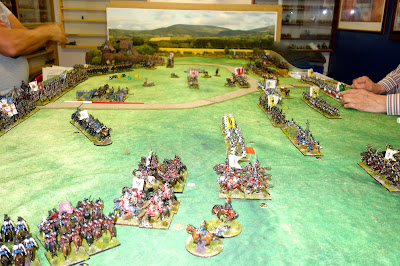 The Austrian cavalry on their left rallied and reformed a line facing the oncoming Prussian reinforcements.

Dave moved his infantry close to the Austrians, daring them to charge. 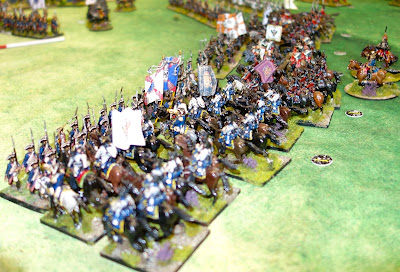 Would they? Wouldn't they? Conrad wasn't sure, but then threw a 6, so as a dashing commander they had to charge! All six regiments!

The first wave survived the closing fire but was repulsed in the 'melee'.

The second wave however hit the sorely wounded and somewhat unsupported Prussian infantry and both battalions were broken. That seemed about right as two battalions were overwhelmed by six regiments of cuirassiers and dragoons. If the Prussians had been supported then the outcome would have been very different, subject to the dice rolls of course.

At that point we called it a day. The Austrians still had significant numbers of cavalry available, as their right wing had remained rooted to the spot for most of the game. However, the Prussians still had a marked superiority in infantry quantity and quality so were more likely to be able to gain and retain possession of the field. I reckoned it had gone more or less as in the real fight in 1742, so declared it a minor Prussian victory.

It was a great game, and it was pretty close in the end. The superiority of the Austrian cavalry over their Prussian foes was a potential battle winner, as was the superiority of the Prussian infantry. The artillery was pretty effective in denying portions of the field to the enemy, but as I said when Conrad queried the effectiveness I said that the two Prussian models represented 20 12pdrs and four 24pdrs so blowing away an infantry battalion with canister wasn't too unrealistic.

Next time we're all together we shall attempt Hohenfriedberg (part 1 v the Saxons as this can be fought as a discrete game).

Email ThisBlogThis!Share to TwitterShare to FacebookShare to Pinterest
Labels: 1st Silesian War, Honours of War, War of the Austrian Succession