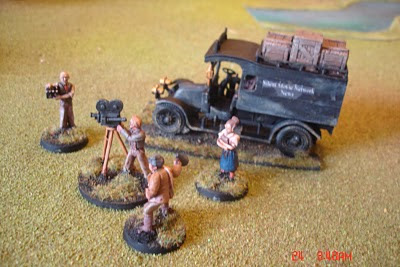 At least the Easter weekend has allowed me to finish off the last of my RCW units. A Bolshevik Tchanka (Eureka), another 8 Red cavalry (Copplestone), and 10 White cossacks (Old Glory). I have a few odds and ends left to do but they will be done in the fullness of time although am on with the gun crew for my Red Navy torpedo boat. I also finished my Pulp film crew from SMN News (Silent Movie Network News of course).
Easter also gave me the time (apart from 'practical parenting') to go through the old lead mountain. I delved into the bottom draw of the cabinet in my games room and found boxes that had remained closed for many years containing a vast array of unpainted 6mm figures and dead spiders. Most are ECW from Irregular and Heroics and Ros that I bought at least 10 years ago with a 30 Years War project in mind. There were also a couple of Irregular ready made armies for the Mexican Adventure. These are now all on ebay. I also came across a large pile of 6mm French WW1, Irregular again. I know I had these at least 20 years ago but having finished the Germans and BEF lost interest. At the very bottom of the draw (deep draw) was a load of 6mm Great Northern War - some Russians but mainly Poles and Saxons. These I must get done to add to and complete my armies for this conflict as its one of my favorite. All this was just the stuff I had forgotten about! I know I have about 100 unpainted Darkest Africa 28mm in another draw but as I already have about 300+ more already painted I doubt these will ever get done so they are no doubt destined to appear on ebay. Same goes for the 28mm Abysinian army. why did I buy them? Other stuff likely to have a future on ebay when I can summon up the courage to do so is my War of Austrian Succession Piedmonteste army that has never seen the light of day.
We shall see......
By Colin Ashton - April 07, 2010