Moltke's revenge........or was it more like une position not so magnifique? 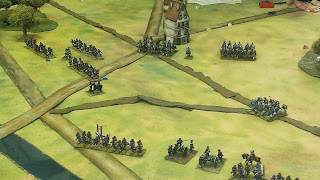 (Initial French deployment)
We played yet another Franco-Prussian game at the club last Thursday, again using Black Powder. The French were deployed defending a river crossing, with a division deployed along the ridge running parallel to the river and in a wooded area. A regiment of Turcos were holding the village on the opposite side of the river, while another regiment of Turcos and a brigade of light cavalry formed a reserve. I wasn't planning on staying all evening as my back was not up to it, but agreed to play on the French side. We were pretty certain that the Prussians would be entering the table from ANY of the roads leading to our position, even the ones to our flanks and rear, but didn't have enough men to cover every option. (I had an idea that this game was loosely based on Froschweiller but I may be wrong). 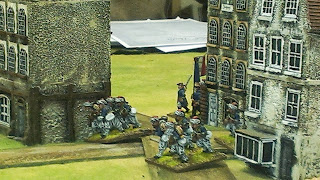 (Above: Turcos holding the village across the river. Below: Holding off the attack by the Bavarian brigade) 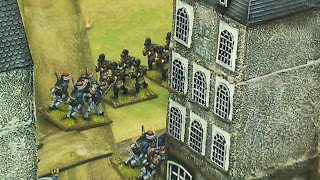 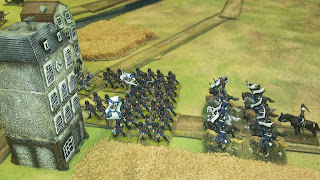 The Bavarians were the first to enter the table, well their gun was as the rest failed their command role and as they weren't in march column were stuck off table. Our artillery and the Turcos in the village didn't manage to do much damage other than to disorder them. Next move the rest of he Bavarians and Saxons, together with an Uhlan regiment entered the table and pressed home an attack against the village. They were brought up short by close range fire from the Turcos and the French lining the ridge across the river. The mitrailleuse missed. 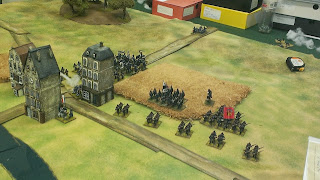 (The Saxons by-pass the village while the Badeners emerge in the French rear!) 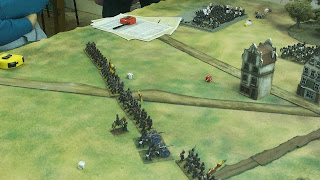 Next move the Prussians brought on more troops (Badeners) behind the French right flank. They tried to charge my exposed flank (my regiments were lying down and therefore very vulnerable to close combat). Luckily the Badeners didn't get a very good command role and only made one move onto the table. The rest of the brigade failed to appear. In response to this the French tried to get up and change face, which they did but failed to do much damage on the exposed Baden regiment. Elsewhere the Bavarians were held up at the village and the Saxons were bypassing it to engage the French line defending the river to the right of the village. The mitrailleuse missed again.

The Badeners then managed to get their entire brigade with accompanying artillery onto the table and  were now in a position to envelop the French right and threaten their rear. The French cavalry tried to redeploy but blundered! They were forced to make a move directly towards the Baden infantry! Aargh! Miraculously they survived their break test after taking horrendous casualties and becoming disordered and were able to withdraw back over the ridge. V sensible. 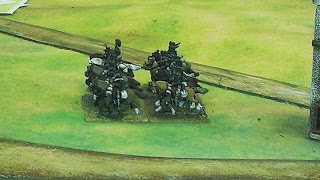 (The French cavalry blundered, and this is where they ended up!!!) 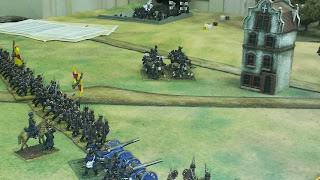 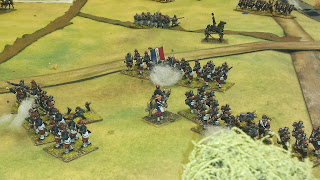 The Badeners poured a massive amount of musketry and cannon fire against the exposed French right, disordering and shaking all units and breaking one. The French did manage to create some mayhem in the Baden brigade by shaking one of the regiments, and thankfully the Baden brigade was  unable to move very quickly round the French rear as they were unable to throw decent command roles. The French cavalry blundered again and the mitrailleuse missed and malfunctioned as the gunners presumably had started hitting it with hammers and empty wine bottles! 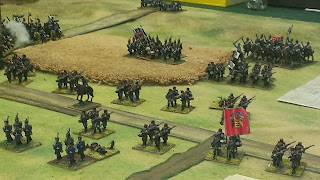 (Such a juicy target for the French mitrailleuse which failed to score a hit the entire battle)
At this point the French got some reinforcements on their left flank (a whole division plus cavalry), not really where they were needed but hey, at least they could avoid being hammered by Prussian artillery by hiding behind the ridge. They were well placed to bring their guns into action to interfere with the Bavarians though. However, I believe more Prussians were due to arrive the following move linking the Saxons and Badeners. Sadly, I have no idea what happened next (but a very shrewd idea) as I had to go as my back was giving me serious bother and I was struggling to carry on. Hopefully someone from the club will fill me in on what happened next, or I could have a "what happened next" competition.....? 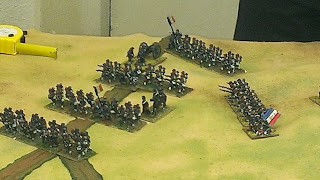