Last week we left the French grimly hanging on in the face of Prussian assaults on both of their flanks. The Turcos in the wood on the left were stopping the Prussians (and Badeners) in their tracks, supported by long range rifle, artillery and mitrailleuse fire through the gap in the woods. On the right the French were also holding on although the Prussians were able to move their infantry out onto the flank and did manage to destroy three French regiments. Sadly, their supports were Bavarians and Saxons who were far less effective and the advantage could not be pressed home. 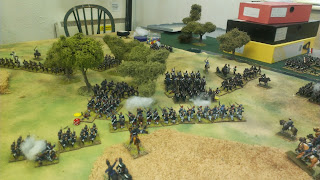 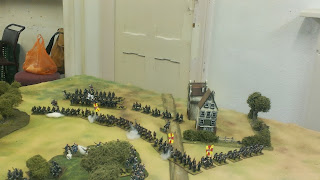 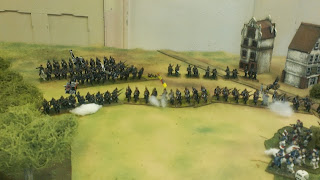 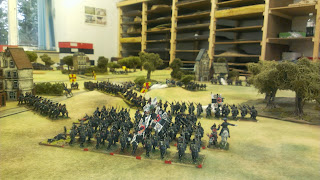 (Above: From behind the Prussian line facing the Turcos in the woods. Below: The French providing support to the Turcos) 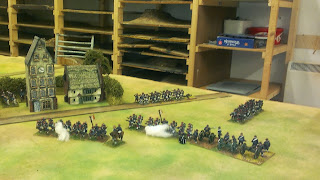 The battle was decided on the French left as the Baden brigade was unable to dislodge the Turcos and was soon stopped in disorder. One then another and then a third regiment became shaken and failed their break tests. The supporting Prussian brigade had already been bloodied last week and was in no position to replace their Baden comrades in the firing line. It would have been suicidal unless the reserve artillery was able to do some damage. They were deployed right on the table edge and were taking ling range fire from a Mitrailleuse but did manage to destroy one exposed French regiment in a single concentrated round of firing.

A very quick conclusion to the game, as we were all done by half 8. The rules do work quite well for the period although the battles are incredibly bloody. Next week we are having another go, but with more Prussian artillery.
By Colin Ashton - September 06, 2013