Well, this turned out to be a real slogging match and the Swedes were on the verge of being beaten. Rob had asked if we could do a Swedes v Imperial game so he and John came up last night for the battle. After throwing for sides and who would be teamed with who, I ended up on my own with the Swedes. One day I'll get to play with my Imperial forces; maybe next time. 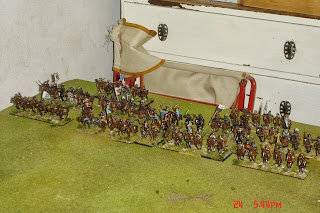 (Above: the Imperial right wing. Below: Swedish army deployed) 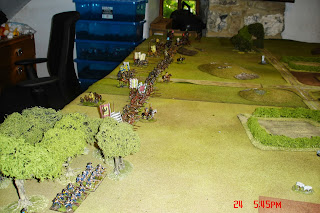 The Imperial army deployed with two strong brigades of cavalry on their right flank (4 x cuirassiers and 6 x harquebusiers squadrons plus a squadron of Croats). They deployed their six infantry regiments in the centre with a battery of 3 medium guns on the hill. They also had a unit of dragoons. On their left flank were  a squadron of Croats and 2 squadrons each of cuirassiers and harquebusiers. The Swedes deployed 4 squadrons of horse and 2 of cuirassiers on their left, with some attached commanded shot. In the centre was the 'Yellow' regiment, a brigade of two regiments of Swedish foot and a brigade of Saxon foot. On the right were a further 4 squadrons of horse, including 2 of Finns, again with some commanded shot. The Swedes were led by Gustavus, the Imperial army by Wallenstein. 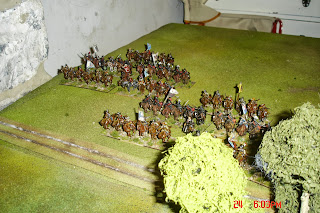 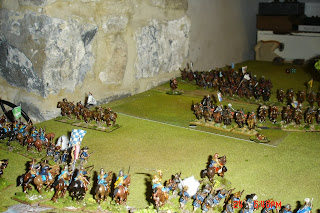 (Two shots of the cavalry battle on the Swedish left)
The Swedes got to go first but made slow progress in the centre. They made even slower progress on the left as I failed my command rolls. I decided to hold the right flank back for the meantime. John and Rob clearly had a plan, and the Imperial army advanced as quickly as their sometimes mediocre command rolls would allow.

As the game progressed my left flank resolutely refused to move, and the only combats were as a result of counter charges. My commanded shot on both flanks caused a few casualties and, more importantly, disorder among the Imperial horse. In a long and protracted series of charges, occasional melees and some poor command roles all round, one of Rob's cavalry brigades was broken while mine very nearly was but was hanging on. I kept throwing rubbish command dice anyway so there was no danger of them getting to grips with the enemy. Even Gustavus couldn't get them to move, although my cuirassiers did defeat an Imperial harquebusier unit and were swinging round to threaten the rear of Wallenstein's rampaging cuirassiers. 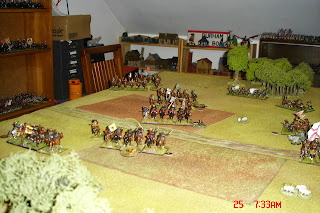 (The Imperial left flank)
On the opposite flank I must admit to making the best use I could of the commanded shot to try and disorder the Imperial cavalry, and held my horse back. We did get into contact a couple of times and my Finns were victorious against some Imperial harquebusiers but I was loath to chance my arm against John's Cuirassiers without softening them up a bit first. John's Croats charged the Saxon light guns at the end of their line but were blown away by closing fire (thank goodness!). By the end of the game John's brigade was I think broken as more than half of its units were shaken or broken, so was no longer a threat. 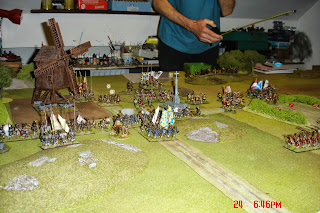 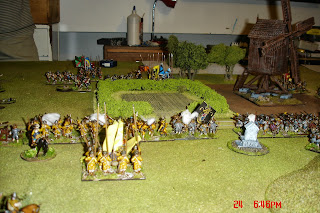 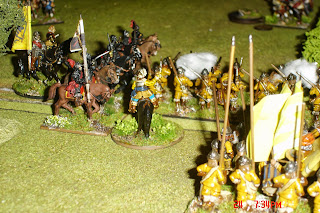 (Furious fighting in the centre and Wallenstein and his cuirassiers rolling up the flank of the Yellow regiment)
Both armies were deployed facing each other in the centre. My foot had a significant advantage due to the firepower a Swedish army benefits from, and were holding their own. I perhaps foolishly exposed the flank of the 'Yellow' regiment by advancing beyond the woods and were promptly charged in the flank by Wallenstein himself, leading a unit of cuirassiers, having successfully thrown a 'follow me' order. This masterly move took me by surprise but hey, it happens. My regimental artillery was overrun and the cuirassiers crashed into the flank of a unit of shot. They too were defeated but at that point I managed to successfully get most of the 'Yellow' regiment into a hedgehog. Sadly, the Swedish 'Household Company' attached to the regiment were not so lucky and they were hit in the flank. They did manage to hang on for a couple of rounds of combat but were eventually to fail a break test. This left the Swedish centre dangerously exposed as they were struggling to hold off repeated assaults by John and Rob's pike blocks. My Swedish brigade was approaching break point as were the Saxons but thankfully John's brigade of foot facing the Saxons was already broken by this point. 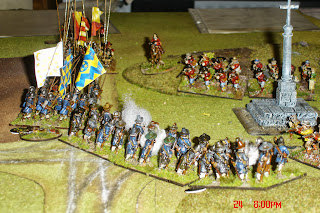 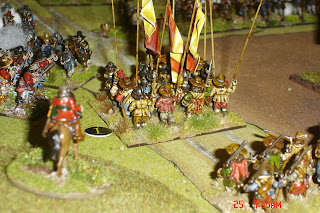 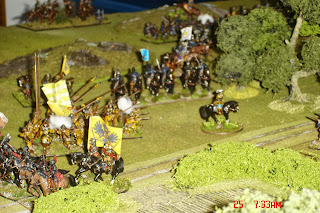 (To the rescue, almost. Swedish cuirassiers attempting to threaten the rear of the Imperial cuirassiers rolling up my centre)
At that point we had to call it a day. As it stood, the Imperialists had 2 spent brigades to my none, but I was unlikely to enjoy that for much longer, especially with my centre in danger of being rolled up by Wallenstein's cuirassiers. I was happy to have managed a draw but had it gone on I think the Swedes would have probably been beaten unless I was able to break a third Imperial brigade..

We did wonder about the power of Swedish commanded shot. They can do serious damage to enemy horse, which is usually superior and is why they were put there in the first place. The temptation is to use them to soften up the enemy before releasing your own horse. However, they can tie down a brigade of horse and are vulnerable to attack themselves. 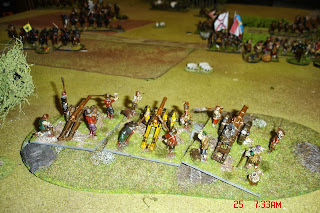 (Imperial artillery battery. What a waste!)
A great and very challenging game I think and we all enjoyed the evening. Oh, and yet again the award for most ineffective unit in the game must go to.........its a tie for first place between my dragoons and the Imperial artillery. My dragoons did nothing all battle as they were either disordered and unable to move or failed their command rolls, while the Imperial artillery only hit my troops 2 or 3 times the entire game. Man of the Match goes to Wallenstein. 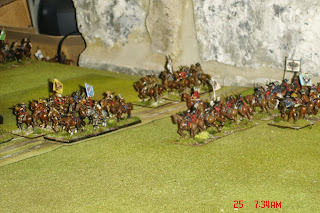 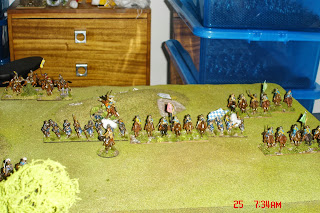 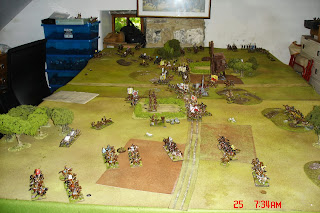 (The end of the game. Confusion reigns)