Franco-Prussian War: Fighting to a conclusion

This weeks game at the club was the concluding part of the Franco-Prussian War game started last week. I was determined to see the game through to a decision as I won't be able to get the the club for several weeks. I'm hoping that I'll be able to do a little painting once I get home from hospital, as I am very close to getting my Crimean War collection battle ready. Fingers crossed!

We left the battle with the Bavarians trying to oust the French from the main town with their supporting Wurtemburgers manfully soaking up long range French chassepot and artillery fire. My Prussians were in retreat having failed to take the village on the river, leaving an uhlan regiment dangerously exposed to close range rifle fire. Oops! Meanwhile, the French main force was being attacked by a Baden brigade on the flank and a Prussian brigade with supporting cavalry in its rear. 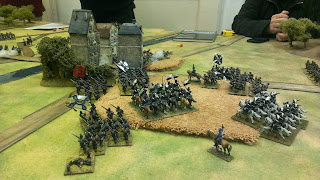 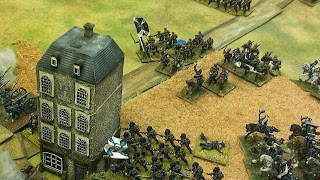 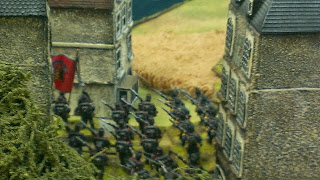 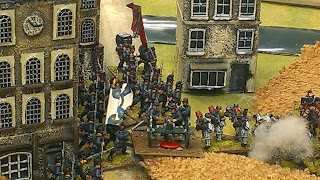 (At the other end of the battlefield the Prussians advance slowly driving all before them while the Baden brigade are held up by a combination of deadly chassepot fire and some aggressive French cavalry.) 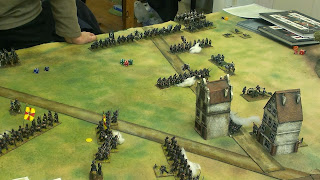 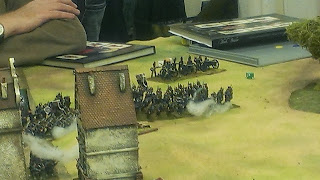 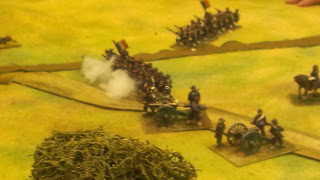 (The second Prussian assault on the small village guarding the ford. This was also beaten off but the defenders were left shaken and part of an exhausted brigade) 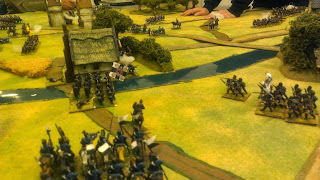 So ended the game. The French were being attacked on three sides and the main Prussian objective had been taken. A very fluid and fast moving game with lots going on. Man of the match has to go to the French cavalry who messed up the Badener's attack very nicely even if they were all driven off in the end.