Louis the Phwoooaaarrrrteenth on tv and on the tabletop!

John and his son Neil were up this week for another game to familiarise ourselves with the Impetus Baroque rules song my Franco-Dutch War armies. This coincided with the BBC's new costume drama Versailles, charting the life of a young Louis XIV as he bonks his way through episode 1. The sets were lavish and Louis sexual appetite was extensive. All things considered a promising start. Definitely Game of Thrones meets Downton Abbey.

Meanwhile, back in the real world there was no bonking in our game. John took the Dutch/Spanish and Neil and I were the French. The objectives, apart from battering the other army into submission, were the church, hill and road junction, all more or less in the centre of the table.

I don't have a good recent track record with cavalry, so Neil and I took a brigade each. Neil had the Maison du Roi so it made sense to give him the Gardes Francais and Gardes Suisse brigade as well. I thought it'd be a good idea to place all our horse in the centre. It was and caught John completely unawares and on the back foot. Neil's infantry were our best so they had the task of holding our rather extended right flank while the dragoons were poised ready to race for the church on our left, supported by ten battalions of French foot in two brigades. Our heavy artillery was placed to support Neil on the right. The French plan was simple. Hold back on the right, punch all the horse through John's centre and follow up with a brigade of infantry while the other brigade and the dragoons held the church and covered our left flank. The Dutch and Spanish fielded nine squadrons of horse (more than us) and 16 battalions of foot plus a unit of dragoons and artillery. 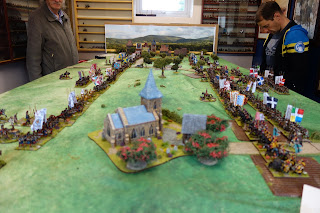 The armies deployed for battle. 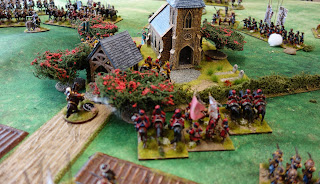 French dragoons race for the church and occupy it ahead of the Dutch guard. 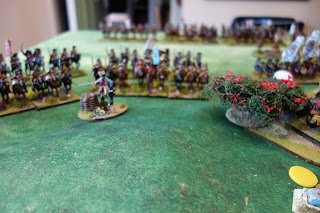 John sent one of his horse brigades around our left flank, skirting the church. 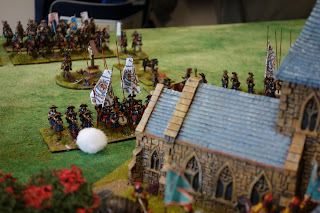 The Dutch guard supported by artillery crippled the first unit of dragoons with some effective shooting, but we held on for a while. 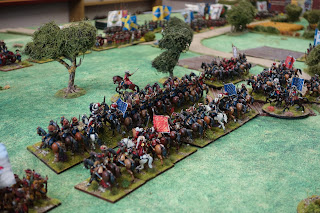 All seven squadrons of the French horse advancing over the hill in the centre. It was a magnificent sight and caught John on the back foot. 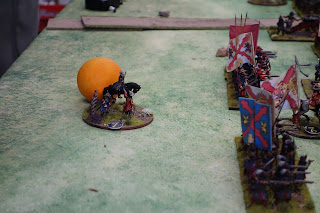 The Allied C-in-C orders the Spanish foot deployed in the centre to advance. 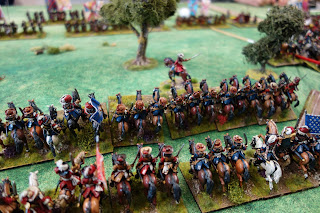 Cuirassiers du Roi and la Reine regiment emerge on the hilltop to face the Spanish. 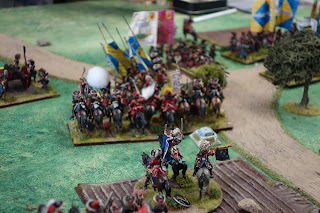 Neil ordered one of Maison du Roi squadrons (including the Grenadiers a Cheval company) to charge a Scots regiment in Dutch service. 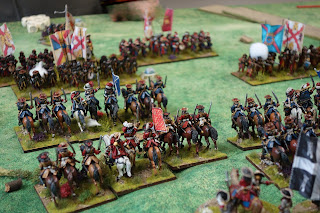 My Horse thunder over the hill. I had decided that it was worth trying to punch a hole through the Spanish in the centre before the Dutch horse could intervene on my left or redeploy to cover their centre. 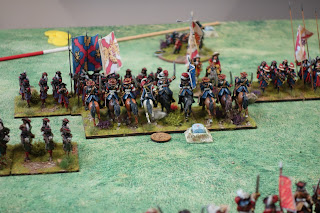 A squadron of the Cuirassiers du Roi crash into a Spanish battalion, driving it back on its supports and destroying it. 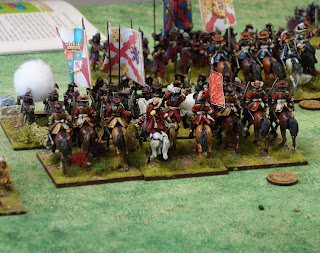 La Reine regiment of horse hit another Spanish battalion which is also destroyed. In all the Spanish were to loose three out of their five battalions but I failed to break the brigade. 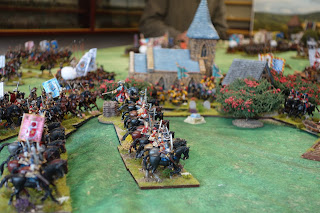 Dutch horse on our left flank. 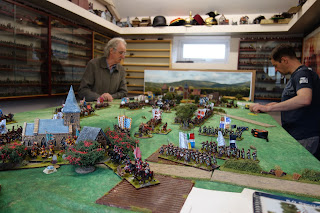 The battle intensified and the armies were engaged all along the line. 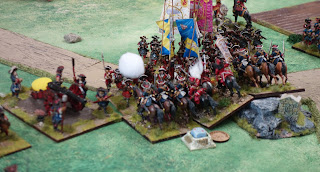 The Scots just before they were destroyed facing the Maison du Roi. The latter were then exposed and destroyed. 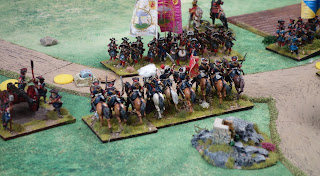 Neil then tried another charge but it fell short.Oooops! 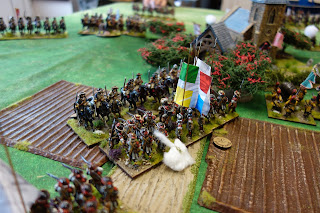 On our left, John's Dutch horse charged our line but were repulsed. Further waves of attacks would also falter. 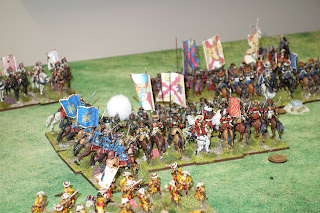 The Dutch horseguards were able to redeploy from the flank and take one of our squadrons (La Reine) in the flank while they were locked in combat with the Spanish. La Reine were destroyed. 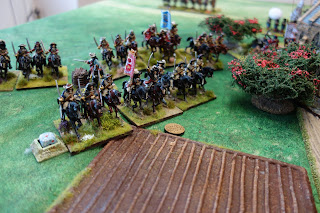 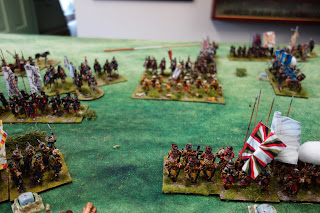 In the centre, Spanish Dragoons and the Dutch guard trade shots with one of my Swiss battalions. 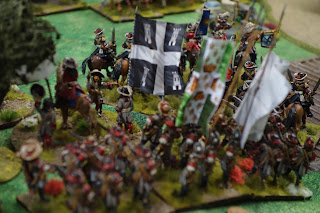 The French CinC leads the reserves forward over the hill. 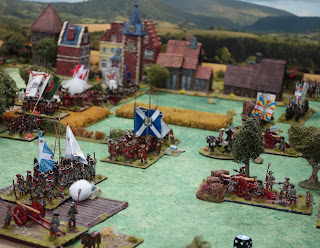 On the right Neil's brigade finds itself facing seven battalions of Dutch and their allies. 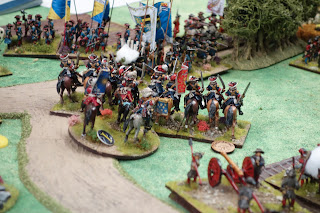 The last remaining squadron of the Maison du Roi attacks. 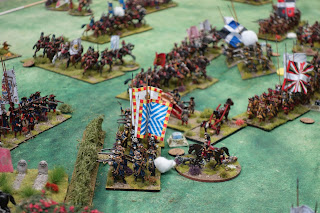 John's reserve horse sweep towards my centre, Imperial cuirassiers to the fore. 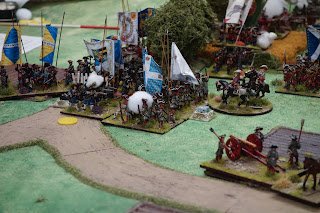 After driving off the French cavalry, the Dutch battalion above was charged by the Gardes Francais and pushed back. 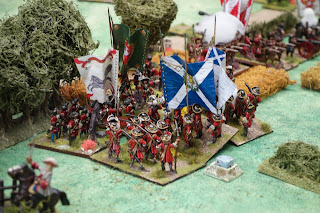 The Scots Douglas regiment charged a battalion of Hanoverians in Dutch service. After a furious melee they were repulsed and broken. 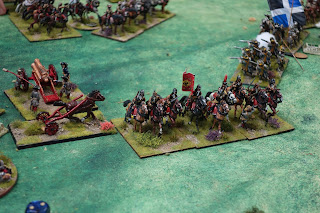 The Imperial cuirassiers punched a hole in my line after destroying a battalion of Swiss.  Thankfully it was to be too late for them to exploit their success and we were able to cover the gap in our line. 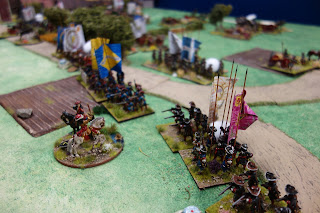 Two Dutch battalions were forced to retreat when they failed a brigade morale. The other units in their brigade had been destroyed, and they were not very keen to suffer the same fate as their comrades by hanging around any longer. 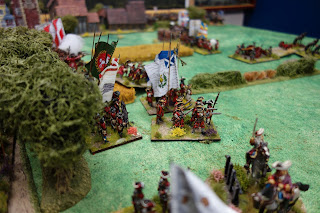 The aftermath of the fight on our right, with the Douglas regiment in full retreat.

What a fantastic game. It was touch and go whether the French would break through before the superior numbers of Allied horse could intervene. On the right our troops had held firm against superior numbers and had taken the fight to the enemy despite terrible losses among the Gardes Suisse and the destruction of the Douglas regiment.

In the centre a hole had appeared in our line as the Imperial cuirassiers burst through a battered battalion of Swiss. Thankfully they were unable to exploit their success. Our horse were all destroyed after their heroic and almost successful attack on the Spaniards, whom they just failed to break! So close! Thankfully I still had three or four untouched battalions in the centre.

On our left we still held the churchyard right yup to the final move before the garrison were driven out. The Dutch were unable to occupy the church though as they were quite battered and in disorder. Their horse had failed to break the infantry covering our left flank and had all been either destroyed or pulled back out of danger.

When we finished after almost five hours of incredibly intense battle we totted up the losses. The French army had JUST exceeded its break point in the last move, resulting in a Dutch victory. However, we forgot to add some victory points to the French who were holding all three of the objectives at the close of the game, so I reckon that the game was a draw, albeit a very bloody one for both sides.

Their were so many almost decisive moments in this game. Would the French horse break the Dutch centre? Would the Dutch be able to turn our left and break through our centre? Would our right hold against superior numbers? Apart from our CinC and the commander of Neil's infantry, all our commanders were rated as 1 (which is pretty rubbish) and two of them were downgraded to Zero in the course of the game. Thankfully my CinC (Turenne) was rated as  4 enabling him to lend a hand with our horse and then the reserve when the time came.

A superb day and a great battle. The best yet using these rules. Oh, and it was Neil's 40th birthday as well!!!!

I now need to pack all this stuff up and make sure I have everything ready for the AMG16 gathering on 11/12 June where Robbie and I are putting on a large WAS battle (Soor).