Robbie and John were here yesterday to play this game, the second in my fictional mini-campaign set in the Durham Valley in 1862.

Due to a complete technological cock up on my part I had accidentally sent Paul a cancellation email on Outlook, so Major General Thompson van Paulus did not take command, as a 'staff error' had led to him being called away before the battle. That left Robbie to re-assume his seriously wounded character from last week so the Confederates were led from his stretcher by Lieutenant-General Roddis    "Peeler" Robbie, late of Her Majesty's Metropolitan Police and the South African Constabulary.

So, the Confederates deployed the bulk of their forces, 3 strong brigades of infantry, along their old positions on the Stanhope Turnpike, anchored to the south by Stanhope Tavern and the north by the thickly-wooded Scutterhill Mountains.  Their cavalry and their reserve, a militia brigade, were en route and would arrive during the game.

The Union forces, now commanded by Major General "Bloody John" O'Reidy after my persona was removed from command following last week's debacle, would begin their attack off table, entering along a randomly determined location on a dice roll of 1-4. On a 5 or 6 John could chose where they entered.

As (bad) luck would have it, two of my brigades, including the tough Iron Brigade, were to enter through the wooded slopes of the Scutterhill Mountains. The former found themselves trying to force their way through thick woods and were delayed significantly before they were able to get into action. (Actually, I got their deployment mixed up with the other brigade, which didn't help!).

John's plan was to attack on the left (me) and the right (The Irish brigade supported by the cavalry and reserve artillery battalion) while we demonstrated in the centre with two further brigades including one of unreliable troops. Well, yet again we were to see another plan that didn't survive contact with the enemy.........or of me attempting to follow it!)

Robbie launched his Texas brigade in all all out attack on our left, and also raced across the open ground in the centre assaulted my brigade while we were deploying. The Confederates also pushed forward to occupy the Apple Orchard and even left the security of the sunken road to take the battle to the Union army in the centre and catch us somewhat on the back foot! 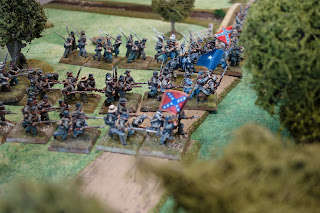 The Texas brigade rushing through the woods on the Confederate left.

My brigade in the centre before deploying. 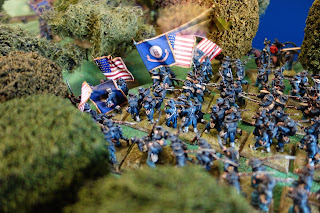 The Iron brigade struggling through the thickly-wooded slopes of the Scutterhill Mountains. 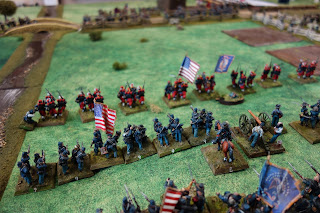 Union troops in the centre deploy, with a large battalion of zouaves pushed out in skirmish order. 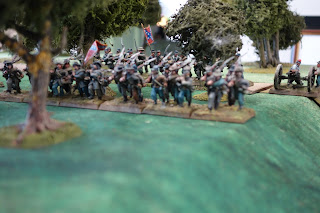 The Texas brigade advancing through the woods. 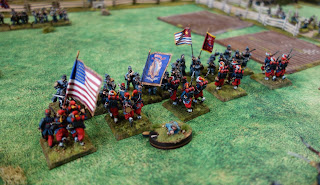 Robbie tried a follow me order and charged my Zouaves across the open ground in the centre. My closing fire failed to stop them and both units were locked in combat for several rounds before the Confederates were forced to withdraw. 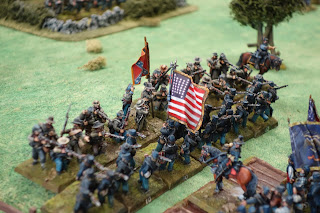 On our right Robbie's Confederates left the safety of the sunken road and charged John's brigade of unreliable infantry, driving the lead battalion back. 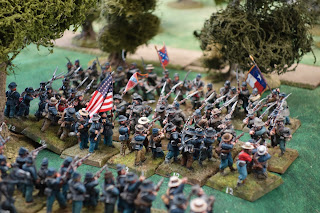 The Texas brigade locked in combat with the Union infantry in the wood. My Iron brigade were supposed to be supporting them but were still struggling through the dense forest. 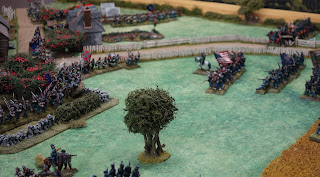 The Irish brigade on the attack. In the distance Union cavalry are about to charge a 'whipped' unit of Confederates. They get into contact but are driven off, their Brigadier dead. 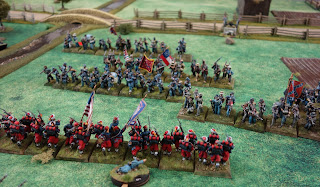 The entire Confederate centre brigade launched itself towards the brigade in the Union centre. Supported by artillery they were able to push back the Union brigade, which with 3 out of 4 battalions shaken, was deemed spent. Sadly for Robbie the Confederate brigade took unsustainable losses and was also forced to retreat back to the road a spent force. 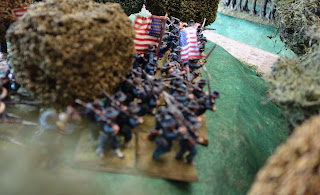 The Iron brigade finally emerges from the woods. And just in time too as the Texans had broken the battalion facing them and were in danger of breaking the entire brigade. 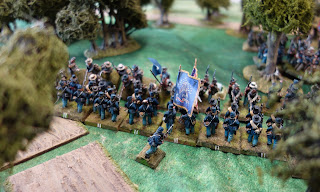 The Iron brigade push on into the woods and are charged by the Texans. 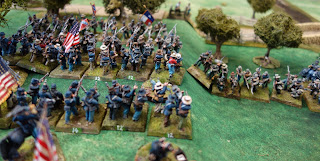 My second Union brigade in the woods on the brink of being broken. 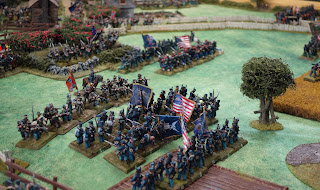 The Union troops are held on the hill but the Irish brigade is assaulting the Apple Orchard, and successfully drive the Confederate defenders ahead of them. 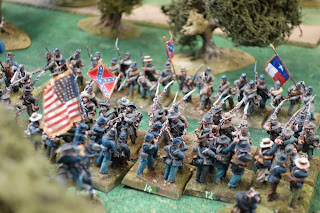 The moment my isolated brigade in the woods is broken! 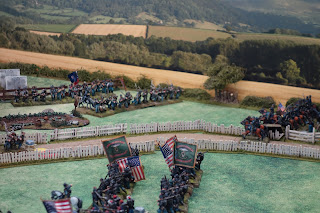 Robbie's militia brigade advance in the face of Union artillery. He had no choice as they managed a blunder. 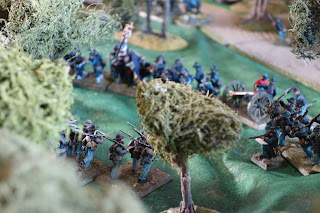 The Iron brigade(right) finally in  position to overwhelm the Texans. The latter fall back quickly to avoid being cut to pieces by canister fire. 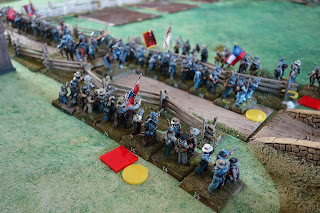 The shaken Confederate centre has fallen back to the road, its job done as the Union centre is so beaten up it won't be following them. 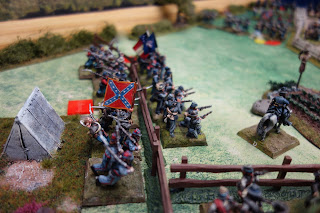 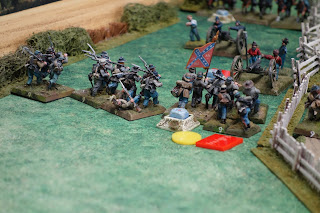 The Confederate attack on our right is broken. 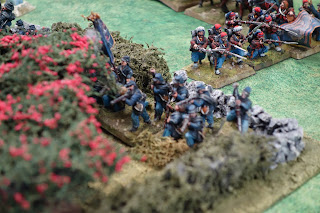 The Irish brigade forces its way into the Orchard. 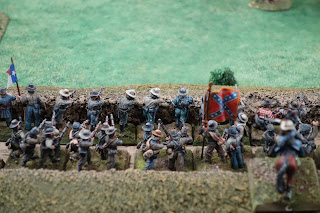 Dismounted cavalry cover the retreat of Confederate infantry back to the sunken road. 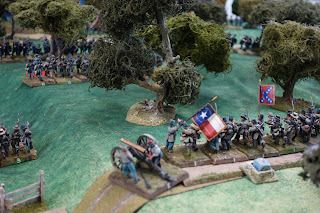 The Texans back where they started, deployed on the Stanhope Turnpike to await the advance of the Union Iron brigade.

The first thing I have to say is that it was a great game and Robbie did a fantastic job in wrestling a draw from the jaws of defeat thanks to his aggressive tactics early in the game that crippled two of our brigades. I know he felt that the Confederates had been stitched up when we started the game but I had anticipated that the far better but fewer Confederates would more than be a match for the more numerous but generally average/poor (except for the Iron and Irish brigades) Union troops. I do also have to apologise for putting too much Union artillery on the table. I thought it was about right for five brigades of infantry and a brigade of cavalry, but maybe just a little bit of overkill. Actually, it wasn't THAT effective as it could only peck away at one part of the Confederate line at a time, and as it turned out it wasn't that accurate in the game.

Ok, the Confederates would be forced to withdraw in the face of the successful union attacks on each flank, and they could not afford to loose any more troops. Then again, neither could the union army. One more broken brigade on either side would result in defeat. As far as my 'mini campaign' is concerned the Confederate army has successfully extricated itself from the battlefield and has withdrawn towards Auckland Station, where they will no doubt make a stand should the Union Army of the Northumberland choose to continue their advance once they've pulled themselves together.

My inept handling of the Iron brigade as well as my other two brigades of infantry is likely to get me transferred to some windswept coastal region in the north east or worse still, somewhere like Oregon in the far west. Whether this happens before the next battle remains to be seen.
By Colin Ashton - July 16, 2016