Back to the War of the Austrian Succession. A slightly unsatisfying engagement.

Robbie, John and John the Red came up for a game again on Thursday. We hadn't played an 18th game using Honours of War since Robbie and I had been to the AMG event back in June. To say we were a little rusty is a major understatement but by half way through we'd just about dredged our understanding of the rules from the darkest recesses of or brains and got into the swing of it. Unusually tempers were a little short and the usual banter sparked them off on a couple of occasions but I put it down to having forgotten the rules and also remembering all the bits we didn't like first! Robbie and I were the Prussians/Brunswickers and the two Johns the Allied force. We had to attack and defeat the Allies who were trying to extricate themselves from danger and avoid battle.

Anyway, I based the scenario very (VERY) loosely on Kesseldorf, minus the snow etc and plus some Brunswickers as they needed an airing, and balanced the sides up a bit to make a game of it as we were going to be very rusty (really?). Of course the Prussian army of the 2nd Silesian War was still s**t hot (especially the infantry). The Austrians were, well, meh? and the Saxons ok or even pretty good in some instances, with pants generals. The Prussian plan was to 'demonstrate' on the right and thrust forward vigorously in the centre and right. hmmm! I neglected to take very many photos of the game, so I hope what follows makes sense.

The Saxon Leibgarde behind the crest of a hill on the Allied right. 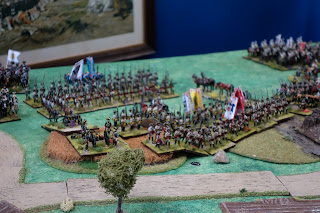 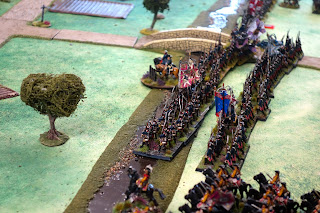 The Prussians attack in the centre. It soon stalled as a result of the Saxon artillery fire. The Prussian left, led by a dithering commander so I had to use my C in C to bolster his command rolls, thus denying the right from his benefits. 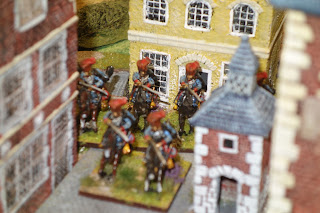 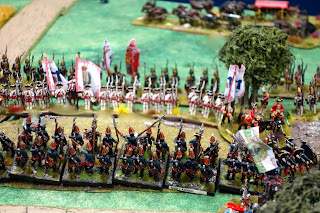 On the left the Prussians close with the Saxon Garde, lurking behind the crest of the hill. 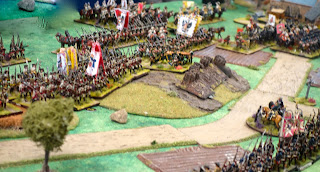 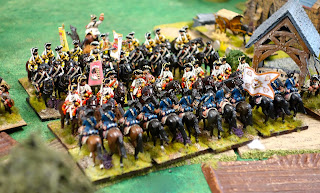 The first cavalry v cavalry clash. The Saxon Karabiniergarde about to destroy their Prussian dragoon opponents, weakened by artillery fire before they even closed to hand to hand combat. 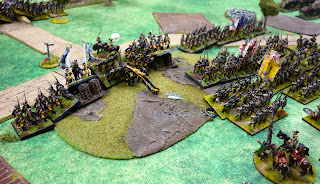 The Prussian IR15 assault and take the Saxon redoubt, but its too late to make an impression on the outcome of the battle. 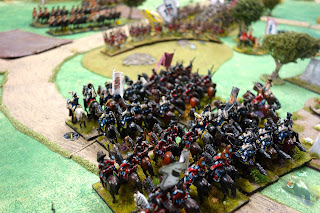 The Austrian cavalry facing the Prussian left had spent most of the battle lurking in the rear. One fortunate charge saw off a battalion of Prussian infantry but they pulled back before the advancing Prussian cuirassiers could close to contact. At that point with Robbie's Brunswickers broken, his dragoons battered, my left in retreat and centre well and truly stuck we threw in the towel. Boo! Hiss! 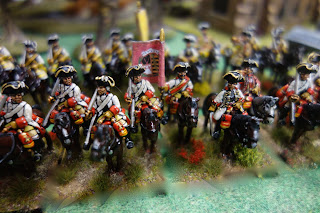 Saxon Furst von Anhalt- Dessau Kurassiere. Ironic given that their 'inhaber' was the Prussian CinC. 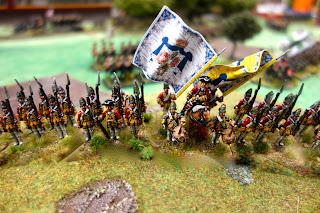 So, a crushing Prussian defeat. Not much fun. Well, actually yes, it was. Despite the grumblings and the rustiness around the rules it just proves that an army of superior troops dies just as quickly as one of Saxons and Austrians. I got the chance to field some new Saxon units and my Brunswick regiments. The latter did very well, but were battered into the proverbial cocked hat and ran away. And my homemade vegetable soup was very nice.

Might have to try another HoW game to regain some confidence in the rules. I think I might prefer Black Powder......or not.
By Colin Ashton - November 12, 2016