The Battle of Wilson's Creek 1861 and the Battleground show.

Last Saturday we were at the Battleground show in Stockton. John and Neil were putting on a 10mm Sudan game while Robbie and I had decided to refight the Battle of Wilson's Creek, which took place near Springfield Missouri on 10 August 1861. The battle was relatively small and we were easily able to recreate both sides from our 28mm collections with each unit present on the day represented by a unit on the table. We used Paul Stevenson's scenario which appeared in issue 364 of Miniature Wargames, suitably updated to accommodate the new rules and so forth from Glory Hallelujah Black Powder supplement. The Federals were outnumbered in every arm but the Rebels had to get their act together and bring all their troops up as they were initially caught napping by the boys in blue. Worthy of note was the fact that nearly half of Robbie's Rebs were pretty useless Missouri State Guard armed with shotguns and that my Federals included two battalions of US regular infantry and a unit of regular cavalry. We played the game slowly and for the benefit of the punters otherwise it could well have been decided rather quickly. 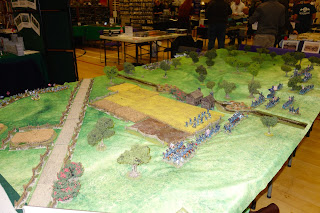 The battlefield. Federals on the right advancing on the Rebels who have been caught with their pants down and can be seen hurrying into action in the distance. 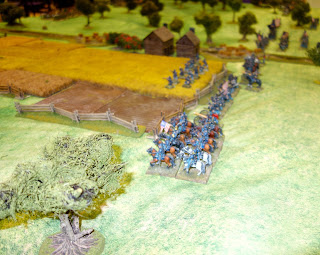 The Federal left flank. This brigade was to hold the cornfield area and thus secure the Federal flank throughout the whole game. 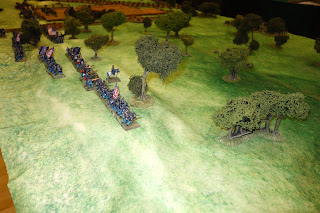 The Federal right flank, three battalions of volunteers stiffened by a battalion of regular and two sections of artillery. 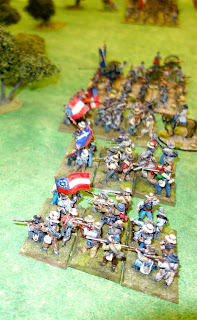 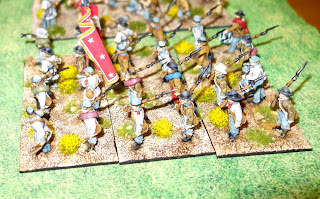 More Rebs on the march. 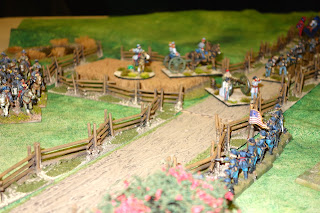 Back on the left, my cavalry had dismounted and were keeping the Reb cavalry at bay, despite being under close range artillery fire.

US regulars supported by artillery and skirmishers holding the 3rd Louisiana and the rest of the enemy right flank back. 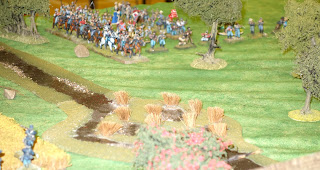 Turn 6 and Rebel reinforcements arrive and head straight for the Federal centre which has been taking a slow walk towards the enemy for much of the game, and showing little interest in getting moving. 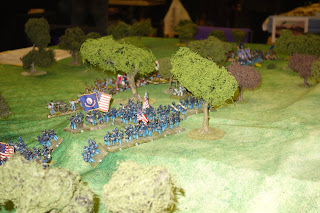 Eventually the Federal centre are in position, about 4 turns late, but not too late as it turns out. 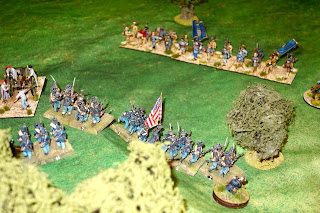 On the right the regular battalion shot up and broke a battalion of Missouri Guard that had tried to charge them but then found themselves a little exposed. 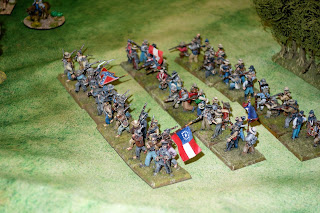 Eventually the Missouri State Guard get on to the Federal right flank but I was able to reposition my artillery and withdraw my infantry to counter them. 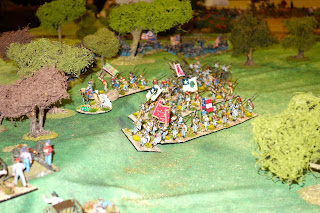 The Rebels had difficulty in shaking out into line from march column, which was to prove very costly to them as they were hit in the flank and one unit and one battery destroyed. 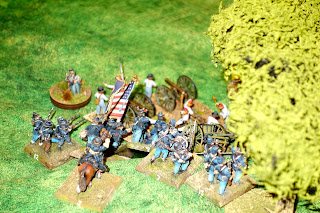 This battery just refused to give up its guns and fought to the end of the game. Very annoying.

Anyway, it was a fun good-sized game and the Federals managed to get a winning draw out of the day. The Rebels just ran out of steam and were unable to envelop the Federal right despite having superior numbers.

As for the rest of the show it was great. Quite busy I thought until the usual lunchtime decline in numbers. Lots of interest in our game and that of John and Neil, and there were some pretty good looking games dotted around the hall as well. As usual the trade was excellent in terms of variety and I caught up with quite a few old chums and acquaintances and made a few new ones during the course of the day. Here are a few pictures of a very small selection of the games on display. 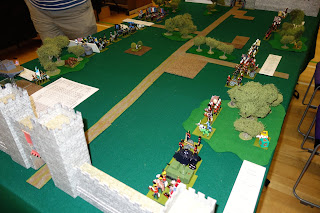 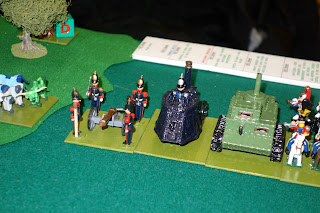 Top two are of the Brompton Bankers game. Very pretty and a bit silly. 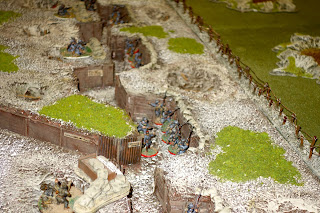 The next two are of a 1918 Kaiserschlacht game, Germany's last great offensive. Nice looking trench systems and troops. 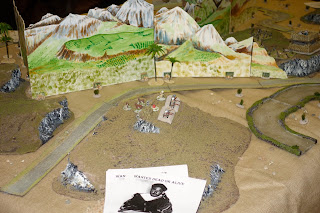 I don't know what this was but I liked the cardboard hills! 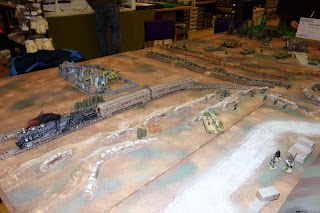 Border Reivers' Cross of Iron game, featuring the attack of the T34s from the movie. Nice train. 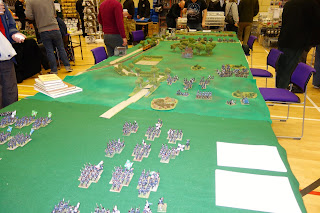 Durham put on an 1866 Austro-Prussian War game, the Battle of Skalitz, one of the early battles of the war (the second day of the war I think) as the Prussians marched through Bohemia. It was very big and featured loads of beautifully painted troops, many lent to the group by yours truly for the occasion. The Austrians played the game using the historical tactics and this resulted of course in a historical outcome as their assault columns were cut down by rapid firing needle guns.
By Colin Ashton - November 29, 2016