Heading south....not my waist, but to Kenilworth!

Tomorrow I shall be heading off to the third annual gathering of members of the 'A Military Gentleman' forum for a weekend of (mainly) 18thC wargaming. Not everyone going is a current member of the forum but everyone is united by the fact that they purchased the aforesaid book and were, for a time at least in some cases, active members of the forum as well as being avid 18thC wargamers.

There are four games being hosted this year. A Jacobite Rebellion game (Graham Cummings), a War of the Spanish Succession game (Paul Robinson), a 19thC Sudan game (Martin Gane) which isn't 18th C obviously but is using the old Peter Gilder rules, and a Seven Years War battle put on by my good self, with my lovely assistant Robbie.

The game is a refight of the iconic battle of Leuthen (5 December 1757) using the Honours of War rules, and based on the scenario for the battle published by Charles S. Grant in one of his 'Wargaming in History' volumes.

I've played Leuthen a few times over the years at home; here are some pictures from those earlier games. 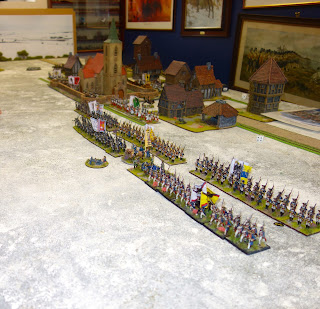 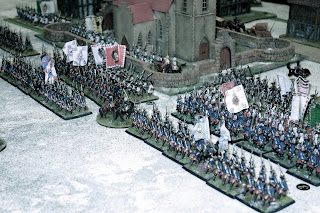 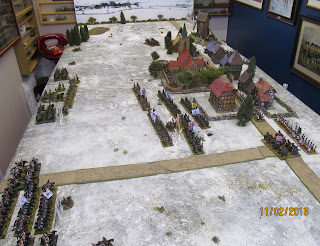 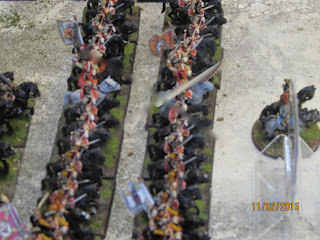 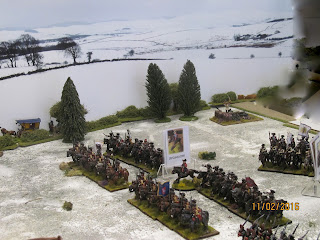 This time I've made a few minor adjustments to the forces involved and there are roughly 15 Austro/Imperial battalions and 10 Prussian battalions, each of 36 figures and 19 Austro/Imperial and 15 Prussian cavalry regiments each of 12 figures. In total with gunners etc a little shy of 1500 figures, all from my own collection! I thought there would have been more. The Prussians have much more artillery and the benefit of battalion guns while the Austrian and Reichsarmee infantry have either abandoned them in their retreat or abandoned them in their haste to redeploy to face the Prussian flanking attack. Of course in terms of troop quality, the Prussian infantry are superior to their enemy, and the Reichsarmee battalions (with one exception) are pretty rubbish.

I'm looking forward to the game and hope to run it at twice on Saturday and once on Sunday. The only downside is that I won't get to play in any of the other games, but I will get a great deal of enjoyment out of seeing the players in my game puzzling over the tactical problems that the scenario presents.