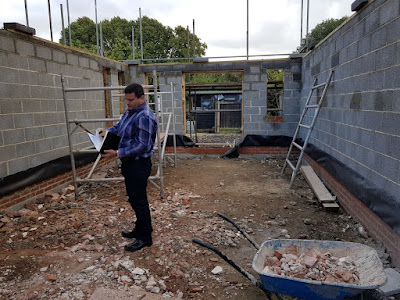 Work started on our 'new' place in late July. The house we're moving into has been literally gutted and is having new heating, electrics, plumbing and numerous other improvements made, such as a bigger kitchen, bigger conservatory/sun room, a new garage for Katherine's MGB, and a new Man Cave, as seen above. The photo was taken from the doorway into the room and looks down towards the garden end with French windows which will open out onto a patio area and eventually a hot tub! The roof will have several large skylights so there will be plenty of natural  lighting. The 'cave' is 22' x 15' so there will be masses of room for a large table, (probably 15' x 6' with 'deployment areas' running along each of the long walls), storage for all my figures, plenty of wall space for my paintings and bookcases, and a paint station at the far end.