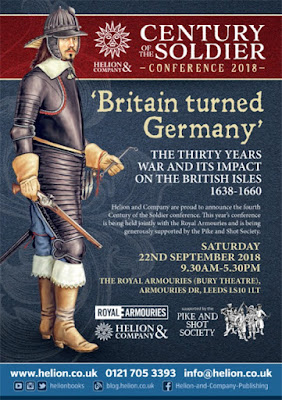 Yesterday John the Red and I made the short drive (just over an hour)  down to Leeds to attend this conference organised by Helion and Co Publishing. The venue was the excellent Royal Armouries museum, although sadly there wasn’t much time to view the sumptuous array of exhibits.

The focus of the conference and the various speakers’ presentations was on the impact of, and to a great extent the almost seamless link between, the Thirty Years War on Britain, hence the subtitle, “Britain turned Germany”. We all know that many officers and leaders who rose to fame or ignamony  (delete as applicable) during our civil wars cut their teeth fighting in Europe. If I learnt just one thing from these (with one exception) excellent presentations it was that Europe during the Thirty Years War was literally awash with English and Scots, with something like 120000 serving throughout the conflict. Most of the rank and file were to die of disease and never return home which is a sobering thought. James I/VI actively recruited fairly hefty contingents of properly organised regiments to support his son in law Frederick ( a naturalised Englishmen), Elector Palatine and King of Bohemia, and Scottish daughter Elizabeth, in their fight to regain the throne of Bohemia. He also ‘borrowed back’ the Anglo-Dutch and Scots Brigades off the United Provinces to further this aim. Indeed there was a sizeable British army en route when the Imperial army defeated the Bohemians at White Mountain in 1620. A great wargaming what if....?  English/Scots/British-flagged regiments and armies served alongside or as part of the major Protestant players in the war, even while the English Civil War was raging. Some, including a number of senior commanders, preferred to remain in Europe rather than fight their countrymen at home. Regiments were recruited (often by emptying the jails) for service not just in Western Europe but further afield, such as Poland, Russia and for Venice against the Turk. But I am rambling. When the papers for this event are published by Helion buy them.

Briefly then, the speakers presented the following:

Prof Steve Murdoch - Britain and the Thirty Years War***
Dr Adam Marks - England and the Thirty Years War
David Flintham - "They have sent to Holland for engineers". Continental influence on military engineering in the ECW.
Martin Paradowski - Aston, Butler and Murray. British officers in the service of the Polish Vasa kings 1621-34 ***
Keith Down - Garret Barry - Soldier, Military Theorist and the Irish Rebellion of 1641
Simon Marsh -A case of Drakes. James Wemyss and light artillery development during the Civil wars
Dr Arran Johnson - General Leslie and the building of the Scottish Army ***
Prof Martyn Bennett - Creating the high commands in 1642

The sessions marked thus *** were in my humble opinion the best and for me the most enlightening, but that does not detract from the content of the other speakers' presentations.

So, and excellent day out. Lots of interesting stuff listened to and learnt. The world put to rights. Wargaming ideas thrashed out in the car.  Thanks to Helion and Charles Singleton (a fellow Old Lidunian).
By Colin Ashton - September 23, 2018