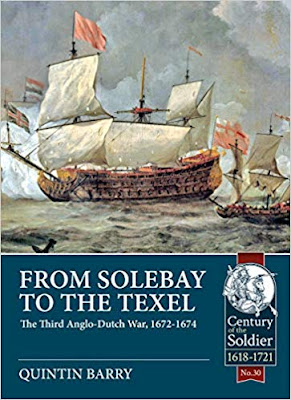 Funnily enough I read this book while holidaying in North Holland barely a few miles from where some of the actions took place, e.g. Kijkduin, where there is now a rather splendid little fort/museum. As readers will be aware I’ve had more than a passing interest in this period, known in Holland as Het Rampjar, and which the 3rd Anglo Dutch War formed part of a greater conflict against France. (In 1674 we changed sides!). The naval side of the war has until recently been neglected (with the exception of a rather splendid Dutch movie called ‘Admiral’), and this book is a welcome attempt at filling that gap. I found the book well written and It was hard to put down, managing to devour it in less than a day, in between copious cups of coffee and naughty cake. The author manages to fit an awful lot into what is a small volume, and does it well. The backgound to the conflict, the major players, and the strategic and elements of the conflict are covered in detail, as are the naval actions themselves and their aftermaths. The text is well supported with contemporary b & w illustrations and some handy maps and orders of battle. I suspect the need to keep costs down prevented the inclusion of many colour illustrations but that isn’t an issue for me. Overall a thoroughly enjoyable and informative read.
By Colin Ashton - November 10, 2018