A quick heads up to anyone interested, as we have another campaign game to settle on Saturday, this time the Romans of the Comes of Nisiapsis Titarse Jarmanicus against the Huns of King Uiskabar. 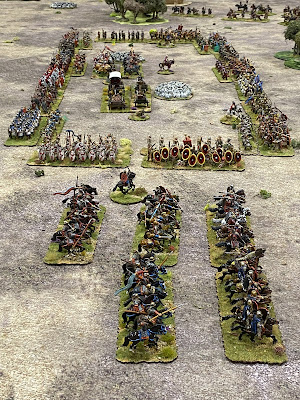 The Romans are marching towards the Visigothic settlement at Barborum Castra when they were ambushed by the recently-arrived Huns. Thankfully the ambush was sprung early enough for them to form into a defensive posture rather than being caught on the march.

We shall be using Sword and Spear as usual, so it should be an interesting game, and I might even get to play. The Romans are but a small part of my collection as there are actually more still the boxes than out on the table. The Huns are almost all Conrad’s Asiatic hoard with some light cavalry and Gepid allies supplied by me.