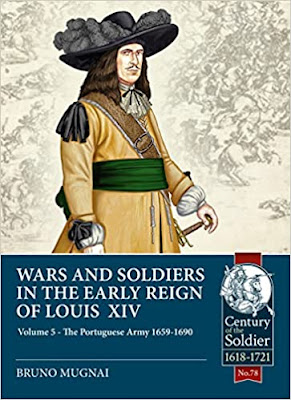 The avalanche of books coming from Helion over the past couple of months shows no sign of halting, with the publication of yet another in their Century of the Soldier series, ‘The Wars and Soldiers of the Early Reign of Louis XIV, Volume 5 - The Portuguese Army 1659-1690, by Bruno Mugnai. At one point in its life the materiel in this book was to have been included in Bruno’s previously published book on the Spanish army. Thank goodness the decision was made to produce a stand-alone book that focuses solely on the Portuguese during what is a very significant period in their history, fighting for, winning and maintaining independence from Hapsburg Spain.

The Portuguese quickly raised an army to defend their homeland, and were supported by foreign contingents from England and France, together holding their own against the Spanish, who despite being in decline were still a dangerous foe. The book provides us with the first detailed description in English of the Portuguese army, it’s composition, it’s campaigns both at home and in their colonies across South America, Africa and Asia, and recruitment, training, supply, unit organisation, equipment and uniforms and colours. The appendices include lists of prominent Portuguese commanders and viceroys/governors as well as several really useful orders of battle and full details of unit strengths at various stages of the war against Spain. Appendix III is the star of the show as it lists every Portuguese infantry terco, giving, where it is known, details of the unit commander, it’s designation/name, where it was raised, the engagements it took part in and where it was garrisoned, it’s ultimate fate and information of coat colours, again where this is known.

As to be expected the book is full of almost wholly contemporary black and white illustrations, some nice line drawings of uniforms and several helpful maps. The centre pages include seven colour plates of original artwork representing a wide range of troops types and colours carried by some of the tercos.

As someone with a very great interest in the period and subject this book is a wonderful addition to what has so far been a superb series from Bruno, and he has excelled himself again; I’m sure this work will soon become the ‘go to’ reference book for anyone with an interest in the subject. Anyone wishing to delve deeper will be aided by the extensive bibliography. Highly recommended and deserving of a space on my groaning bookshelves. I have already worked out what I need to expand my 1670s collection to include some Portuguese to fight my already growing Spanish contingent. Oh dear, never mind 😂😖