Wars and Soldiers of the Early Reign of Louis XIV - The Armies of Spain 1659-88. 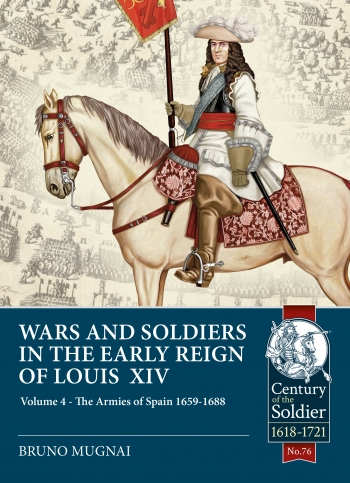 Readers of this blog will be aware that I have a hefty collection of figures for the period covered by this fantastic new book, including a fair few Spanish. Students of the later part of the seventeenth century continue to be spoilt, and volume 4 of Bruno Mugnai’s ‘Wars and Soldiers in the early reign of Louis XIV - The Armies of Spain 1659-1688 is quite probably the best so far in this series. Why? Almost 400 pages packed full of comprehensively researched facts covering the Spanish army at war during this volatile period. Spain was undoubtedly a power in decline, but a world power nonetheless as her enormous overseas empire attests. The focus is very much on Spanish possessions, troops and influence in the Iberian Peninsular and against the newly independent Portuguese, and Italy, Flanders and the Franche Comte.

The book contains four large chapters. The first, ‘The Resilience of Spain’ introduces the reader to the period and the monarchy, and provides a narrative of events during the period covered in the book. The second chapter, ‘Soldados del Rey’ provides a comprehensive in depth analysis of the army, it’s organisation and composition, not allowing the reader to forget that the army recruited not only from Spain, but Naples, Milan, Flanders, the Franche-Comte, Germany, England and Ireland! Chapter three is entitled ‘Spanish Warfare’, while chapter four contains an absolute mass of fabulous information on uniforms, equipment and flags.

The icing on the cake are the appendices. Not only do we get orders of battle which are something of a rarity for this period, but there are pages and pages of individual unit information, perhaps every regiment that served, including names of each colonel, any specific unit name, it’s nationality, where they served and what battles they took part in, and priceless uniform details.

Being a Helion publication the cherry of course on the aforementioned icing must be the sixteen centre pages of gorgeous colour illustrations of uniforms and flags. The rest of the book is well provided for in terms of maps and many contemporary black and white illustrations.

This is a well written and meticulously researched book, surely a must for anyone with an interest in the Spanish army and its campaigns throughout the 30 years covered by the book. Indeed, this must also be the go-to book on the subject in the English language.
All I now need to do is buy some more Spanish to ‘complete’ the army; some more horse and dragoons won’t go amiss I reckon, and a few more infantry battalions…….
By Colin Ashton - December 11, 2021