On the face of it 2021 was far from being a bad year as far as my wargaming has been concerned. Far from it in fact as despite the Covid restrictions at the start of the year I still managed 26 games here at the Burrow, a couple of which were played by live-streaming on YouTube while using Skype to communicate between players. This is not including maybe ten or so other games where I was playing remotely as the games were hosted by others, usually Conrad, Richard and I think once Steve. As my target is as always to have at least one big game here every fortnight, I’m bang on in that respect.

2021 saw me complete a couple of very large projects, namely my Late Romans and Goths. These have as is invariably the case grown out of control but I should be used to that! Some photos of the Romans follow. 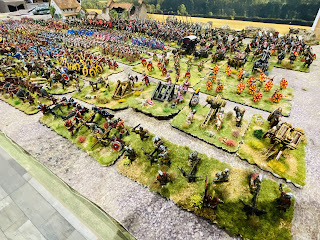 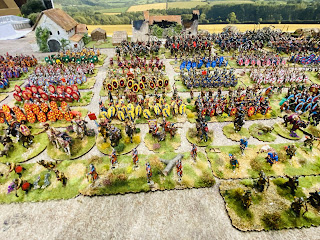 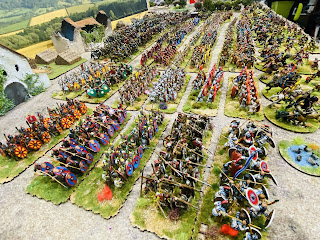 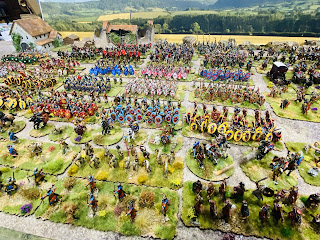 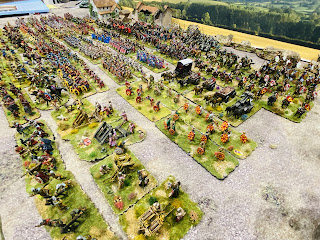 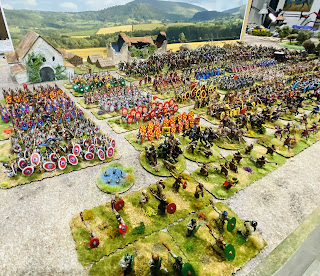 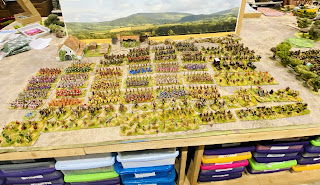 In all there are 20 cavalry units, 23 Legions, 2 units of Auxiliary archers, 12 assorted light infantry units (archers, slingers, javelins) and 4 units of war machines. These are led by 13 command bases of varying sizes and a Kangaroo (Skippio). There is also a camp and a number of wagons. I have no intention of working out what that lot cost me or even adding up the number of figures as that’s not the point. I enjoyed putting it all together, which is the point. Most of the army was painted by me, with some help from friend Barry for perhaps half a dozen or so units, and eBay where I was able to buy a few ready painted units that only needed at best touching up and rebasing or at worst repainting and rebasing. I must have used every manufacturer under the sun for this army, Gripping  Beast being my favourite and Wargames Atlantic my least favourite.
I also lost my way with the Goths and have far more than I planned but not far more than I need. The Goths and the Huns and other Asiatic cavalry that seem to have appeared at the same time will be covered on parade in another post.
I also decided that I would split the lead mountain into period specific lead hillocks, which is much more satisfying and far less daunting. That has allowed me to add to my Franco Prussian and Austro Prussian war collections, some of which have yet to appear here as they need basing. Again some of these were painted for me by Barry but I’ve got all the basing to look forward to.
In the pipeline for 2022 are my Sassanids which should be completed by Easter, and my Wellington in India era collection. I don’t have any Mahrattas finished yet but do have plenty of British and HEIC units ready for basing (these thanks to Barry as I hate painting red uniforms).
Brand new projects for 2022 include the 1939 Winter War in 1/72 scale (pretty much everything already purchased) and a secret one that’ll be on the back burner for a while until I can clear the decks.
I’m sure there are other things I completed last year and  others things I have plans for in this but I cannot remember what they are! I know I still have the odd obligatory residual units for the Sikh Wars, War of 1812, Italian Wars and even the Seven Years War to do but there’s no rush even though it’ll be nice to get them all done.
By Colin Ashton - January 02, 2022