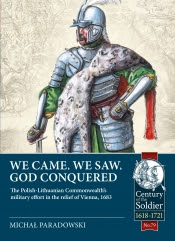 ‘We Came, We Saw, God Conquered’ is without doubt a stunning addition to Helion’s Century of the Soldier series and quite probably the best English language book on its subject I’ve come across to date. ‘The Polish-Lithuanian Commonwealth’s military effort in the relief of Vienna, 1683’, (to give its full title) by Michel Paradowski, is going to fuel the interests of military history buffs and wargamers alike. It got me on both counts!

In preparing for writing this book Michel was able to access a wide array of primary and secondary sources; sources written in Polish which had previously been inaccessible to the majority of native English-speaking authors, and in doing so he has produced a deeply researched and fascinating masterpiece. The level of detail and the sheer range of information contained within the book is impressive, and I was left thinking that my understanding of the subject matter, a topic I’ve read much about previously, has been greatly enhanced and also in many ways, reshaped, for the better.

The history and the organisation of the Polish and Lithuanian armies, and how they were effected by politics and shifting loyalties, are described in great detail, as are all the many and varied different types of soldiers under the command of the King, including much detail on organisation, recruitment, dress, weapons and equipment.

The advance on Vienna and the preparations for the battle set the scene for the main action on the Kahlenberg where the Ottomans were defeated but not destroyed, while the first signs of bickering among the allies start to emerge. The tale doesn’t stop at Vienna, and the events of the remainder of the campaign are also told, including the two battles of Parkany which finally destroyed the Ottoman army, and later operations, for example in Hungary against the local rebels.

There is a great deal of contemporary correspondence included in the book which has been faithfully reproduced and helps contextualise the main narrative. As always the often amusing human side of these conflicts always fascinates me so I was not disappointed.

The book boasts a number of beautiful specially commissioned colour plates of the troops to be found in the army that defeated the Turks and broke the siege of Vienna, as well as a significant number of contemporary black and white illustrations and a selection of clearly drawn maps, including several showing the different phases of the battle.

Overall then, a tremendous and possibly the best account of the campaign written in English to date.
By Colin Ashton - January 30, 2022