War of 1812 The Battle of the Grape River

I’m very late in posting this AAR but, this fictitious battle set in the War of 1812 was conceived and played out to a conclusion over a week ago, last Saturday here at the Burrow. The British objectives were to capture both bridges, the redoubt and the block house to support a landing in force from the naval squadron on Lake Misnomer. Victory would secure the southern shore of the lake for the Anglo-Canadians and thus the lake itself from yet more American aggression. Of course the Americans would say they were holding the lakeside to prevent any such incursion by the redcoats. This was in order that sufficient forces could be assembled to wrestle control of the lake from said redcoats and cross it to invade Upper Canada. Conrad, Neil and Nigel (CinC) were the Americans, and they faced initially just Paul and Dave, to be joined once the fridge man had been and done his stuff, by John.

Now, I probably have more troops available than did either side in this war, but with a figure scale of 1:10 I can comfortably get away with it. I actually have half a dozen more units to finish off, mainly Americans, plus several sloops, brigs, gunboats and the like should I wish to do some 28mm naval gaming! I must have bought them for some reason. One day……. 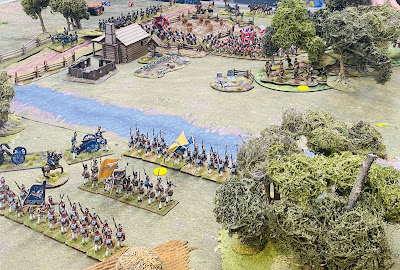 The  American army was under pressure, and with two broken brigades and the loss of the redoubt (and shortly the blockhouse), they were forced to give ground and pull back, leaving the field to the British.
Another great game. The British were afflicted by a serious run of '6's' when being shot at which slowed them down a fair bit, but in the end they were able to bring their marginally superior quality troops to bear.