As well as mustering the Late Romans paraded in a post yesterday, last year I also raised some opposition for them, in the shape of Ostrogoths/Visigoths.

I acquired maybe 20 percent of the figures off eBay (mainly infantry) but they all needed a varying amount of work doing to them in order to fit in with the figures I did myself, as well as basing of course. Here’s some photos. 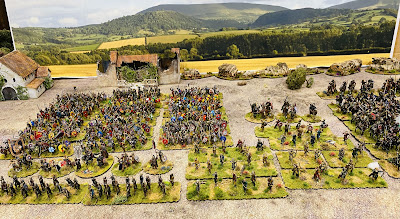 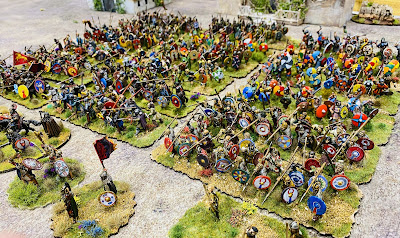 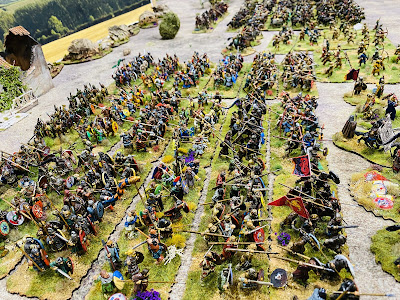 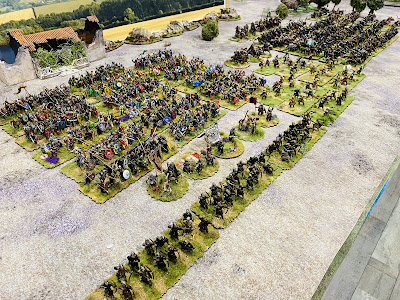 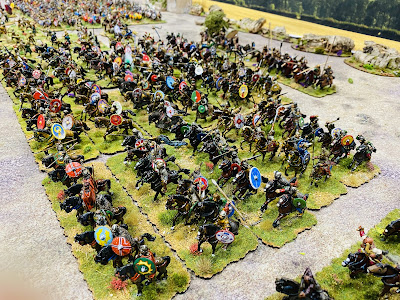 So far I have 17 units of Noble or Heavy Cavalry, nine large (ie double sized) units of close order warriors, three units of close order archers, and seven skirmished units of archers or javelin men. They are led by eight command bases of varying sizes. Now this army definitely needs some more skirmishers with javelins and maybe another couple of close order archer units, and some armed rabble to guard the camp. I already have all I need to complete them, figures that is, not necessarily time. Like the Romans the motivation of running the campaign has seen lots of Goths cross the painting desk last year so maybe I will get the stragglers done in drinks and drabs. 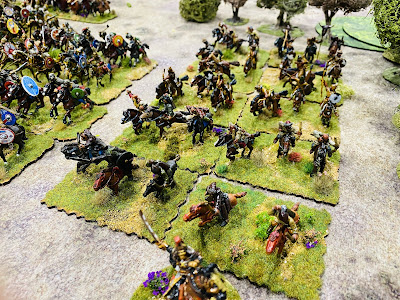 I also appear to raised a few units of Huns and other steppe nomad types; so far there are five units of Hun light cavalry and two units of Avars or similar. Again I have the figures in the lead pile to enlarge the Hun/Hairy Steppe Hoard army perhaps threefold so we shall see.

The figures are almost all Gripping Beast plastics or metals, with a good representation from Footsore, Steve Barker, Irregular and others I don’t recall.

So two rather enormous armies completed (ish) between December 2020 and January 2022, which is good going in even my book. I had my painting mojo running at full pelt for much of the year even if ever else was in slow time so I am very happy with what’s been achieved. I just need to find a place to store them now as I’m running out of space in my games room! If I ever have to cut out any more shield designs I shall more than likely have to be carried off jibbering to the loony bin.