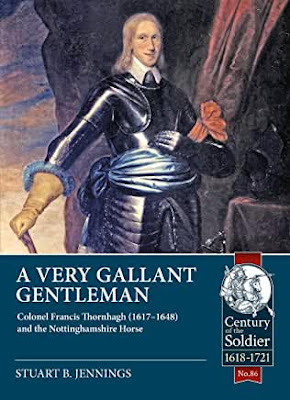 A Very Gallant Gentleman’ is yet another excellent volume from Helion’s Century of the Soldier series (No. 86 no less). The book is one of a growing patchwork of similar publications that are rapidly adding to the list of detailed histories based on a narrow focus, be it of an individual or a region. This narrow focus is a good thing for a couple of reasons. One, it allows for a much more forensic/in depth/scholarly examination of the subject matter, and two, at the present rate of publication there will come a time soon when there will be a study covering every region within the British Isles during the Civil Wars and every person of note or regiment of renown.
This volume takes us through the life of Colonel Francis Thornhagh and the Nottinghamshire Horse until his untimely death at the Battle of Preston in 1648. Starting with some background about the family and their local parish, the book first looks at Francis’ early years leading up to the outbreak of hostilities, then two further chapters cover the years up to Parliament’s victory in 1646. Thornhagh’s contribution to the war effort is taken alongside the likes of Cromwell, Hutchinson and Poynz in the fighting against Prince Rupert and other Royalist commanders. Between 1646 and 1648 Thornhagh served as an independent MP and was a strong supporter of the army during this time.

As both an MP and commander of his regiment Thornhagh would be drawn into the events of the Second Civil War, campaigning in Wales and then in the north west, culminating in the Battle of Preston where he met his death fighting the Scots

Throughout the book we are treated to a great amount of detail. The writing is clear and engaging; I certainly feel after reading the book that I’ve learnt something about the Civil Wars and perhaps more importantly, the man, and was left wondering what he might have done with his life had he not been killed aged just 31.

The book is very well provided for with contemporary illustrations and black and white photographs of some of the key locations as they are today. There are also a number of very useful maps and some full page pen and ink illustrations by Maksim Borisov, who also produced the colour painting on the back of the book.

Another fascinating book and one I can recommend for those with any kind of interest in the British Civil Wars.