I didn’t go to the Other Partizan so I did this instead…….plus an update on the Boss.

……and I still spent more money of course on books I don’t really need. But there is space on the book shelves that needs (?) filling.
I have no interest or desire to do anything involving Samurai but they’re interesting and colourful. 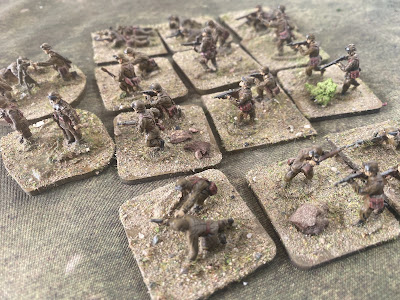 I’ve also nearly completed a battalion of French Dragon Portees for the 1940 collection. I still need to finish their transport, the motor cycle company, armoured platoon and machine gun company so they’re not really finished at all now I come to think about it!
I expect to get the remaining elements of this unit done in a couple of days, then I shall move on to some French armour and the second battalion of the Dragons Portee. In the pipeline and ready to start are the anti tank and artillery plus another battalion of French infantry. I might even do some horses cavalry….
On the domestic front Mrs A is still in hospital but much improved and she is now running the place like her own fiefdom. Surgery was a complete success, the stoma is working and the histology shows that the cancer has not spread anywhere else. (Praise be!) However, complications due to her usually tightly-controlled diabetes resulted in her almost dying as they failed to recognise what the problem was as she went into DKA after a week with no food, drink or meds! They didn’t even get the diabetic specialists involved, despite our repeated requests, until the point they felt she was fading fast. The hospital know they’ve cocked things up big time, and we shall see how things develop when our complaint goes in. Thanks to everyone for their continued good wishes.
Back to the painting desk now for a quick session on more French while I also need to start prepping the Germans.
By Colin Ashton - October 17, 2022