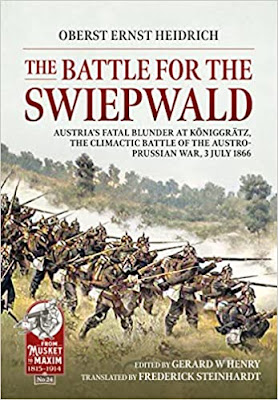 One of the latest from Helion’s ‘From Maxim to Musket’ series is ‘The Battle for the Swiepwald. Austria’s Fatal Blunder at Koniggratz, the Climactic Battle of the Austro-Prussian War, 3 July 1866.’ The author, Oberst Ernest Heinrich, was a serving officer in the KuK army, and first published this account in 1902, and it is refreshing to read such an in depth account of the battle from the Austrian perspective for a change.

The battle for the Swiepwald was an unmitigated disaster for the Austrian army at Koniggratz. The great courage of her soldiers was outdone by the tactical incompetence and outright insubordination of two senior Austrian commanders, leaving thousands dead and wounded and the right flank of the army open to envelopment by the Prussian Second Army and the crushing defeat that followed.

The narrative is superbly done, taking us through every stage of the fighting at an incredible amount of minute detail, down to, for example, company and platoon level! The translation by Frederick Steinhardt is impressive and sympathetic to the original, maintaining the general frenetic pace of the battle. This is not just a word-for-word translation, and editor Gerard W Henry has also done a great job in pulling everything together, including reworking a number of sections, but only to ensure that the language is more appropriate for a modern-day reader.

The book is an absolute mine of information, and the translation provides the reader with a significant amount of indispensable facts thus allowing for a better understanding of events.

The book contains some really interesting maps detailing different stages of the fighting, and some excellent illustrations and photographs of the key areas of the battlefield, which are labelled to allow for referencing with the aforementioned maps, all of which are fascinating. Taken hand in hand with the forensic level of detail used when explaining how the fighting unfolded this is a truly magnificent book.

There are plenty of books on Koniggratz from the Prussian perspective; far fewer from that of the Austrians. Details of all the units and personal involved can be found throughout the text and the final chapter outlining the organised the Prussian and Austrian armies is contextually very helpful. This book goes a long way to resetting the balance between Prussian and Austrian accounts, and in short is simply tremendous# and is a must for anyone with an interest (or obsession in my case) in the Austro-Prussian War.