After the beating the Imperial troops under Robbie had last week using Pike and Shot I offered to restage the game this week but using Impetus Baroque. It was relatively easy to rearrange the orders of battle and unit composition in order to make the switch and there are suggested 'army lists' in the back of the rule book to help with troop factors and capabilities. Now, I am not a particular fan of Army Lists but these were handy for getting troop capabilities right(ish) within the context of the rules although I did make some changes based on my own reading and understanding of TYW Swedish and Imperial forces. The problem we had last week were the maxim gun-armed Swedish shot (well that's what I'm sure Robbie thought they had). The Swedes should have fire superiority but not the way Pike and Shot suggested it should be reflected with three sub units of shot to each pike block. But thats another discussion entirely.

Anyway, the orders of battle were re-jiggled and all was ready. Paul joined Robbie on the Imperial side while John and I reprised our roles leading the Swedes, with me as CinC again. 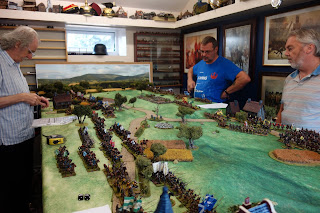 Battle is joined. I put all our horse on the right again supported by a brigade of lower-class Mercenary infantry. John's task was to push the elite veteran Yellow and Blue Brigades straight up the hill to dislodge the Imperial troops using their superior firepower and training. Mmmmm? Robbie had deployed his vastly superior cavalry on each flank, with Pappenheim's elite brigade facing my horse. 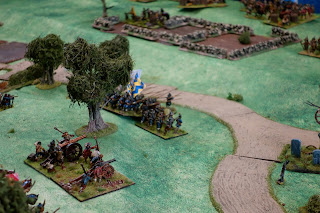 In the centre one of  the three regiments making up the Blue Brigade advances supported by our artillery. 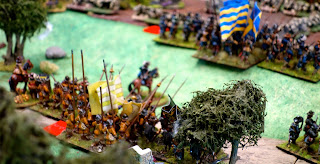 The Blue Brigade reach the walled hills with the Yellow Guard regiment in support. We couldn't tempt the Imperial tercios across the fields. When they did advance we were to regret it! 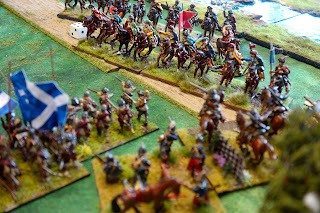 Pesky Croats on our right flank. The first regiment charged my Scots regiment in the flank but were held off and they in turn were charged and routed by my dragoon regiment. Sadly my dragoons were severely mauled in the process and retreated to the town for the remainder of the game. 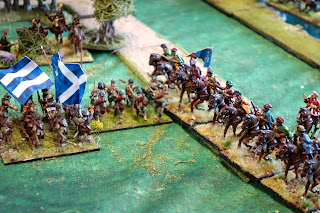 I underestimated the Croats and allowed (but not on purpose) their second squadron to hit my flank as I approached the Imperial dragoons in the woods. A bad move on my part. 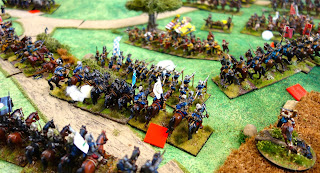 In the centre my horse and commanded shot advanced while a unit of Finns charged a disordered Tercio and actually drove it back twice before grinding to a halt. A second Tercio was advancing on our centre supported by artillery. Treks are very powerful units in these rules, as long as you can get them into melee and don't get shot up too much in the process. 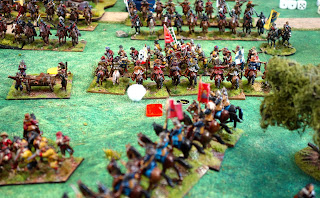 The Finns locked in combat while a squadron of Swedish horse flanks another Tercio. 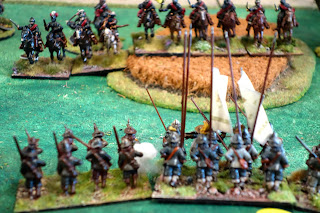 Imperial cuirassiers about to charge the White Regiment. The latter failed their test for defensive fire and were hit by undamaged cuirassiers. Fortunately the cuirassiers didn't get their impetus dice as they were facing pikes, so were held. 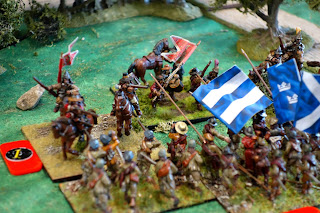 One of the anomalies in the rules is that dragoons seem to a little too effective. On our left, a regiment of Imperial dragoons charged one of our regiments and held it until it in turn was hit in the flank. On my flank my battered Scots regiment was charged by Robbie's dragoons who eventually gained the upper hand and broke my unit. OK I chucked some bad dice but I don't think TYW dragoons would or could have achieved that much success against a veteran infantry regiment. Never mind, it didn't matter in the long run. 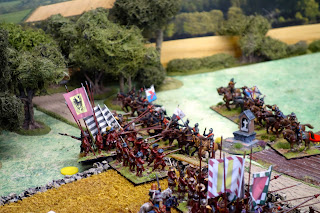 On the left, John's demotivated Saxons had stayed put for most of the battle,  only advancing to line the wall-off field. Paul charged one regiment with his cuirassiers but they were repulsed by closing fire. He then charged his supporting regiment in. They hit and pushed the doughty Saxons back back but failed to break them. 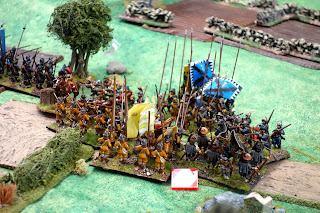 Back in the centre Robbie and Paul had finally realised that they would never win a firefight with the Swedes and advance towards the Blue Brigade, destroying one regiment in the process. They followed up and hit the Yellow Lifeguard regiment who just managed to hold the Imperial tercio. 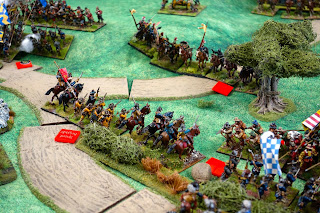 My mixed regiment of horse and commanded shot in the centre held off the Imperial cuirassiers while to their left my musket-armed regiment of foot were eventually successful, thanks to a flank charge by my cavalry, in driving back their opponents. 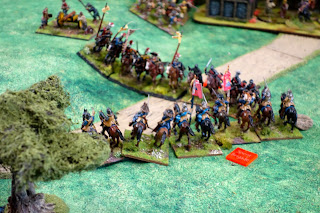 My horse, having broken the foot which they'd hit in the flank followed through, rode over an Imperial battery and hit Wallenstein's Lifeguard at the halt. They drove them back for two consecutive rounds of melee before breaking them. There was now a massive gap in the Imperial line and both infantry brigades were shattered. 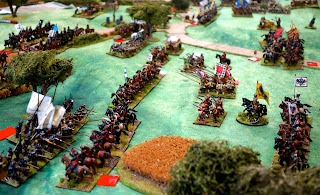 Robbie conceded defeat at this point. His foot were shattered and his horse were badly mauled, rose on although Paul's horse on the flank were holding their own and driving the Saxons back. 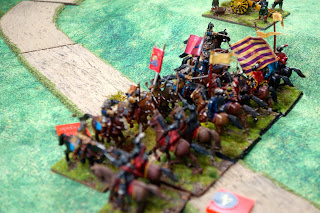 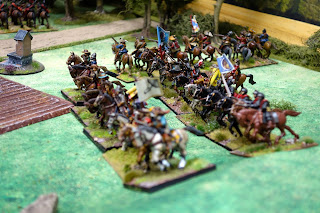 Imperial Harquebusiers covering the withdrawal of their army.

The Saxons on the Swedish left, still holding. 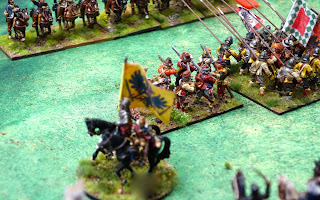 Wallenstein makes his escape covered by his one remaining tercios. 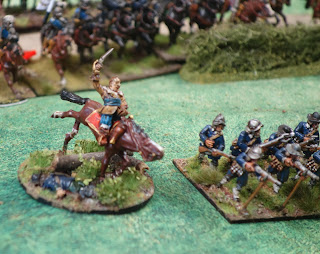 Gustav II Adolf did bugger all in the battle, mainly as I forgot I could use him proactively if I wished. In fact I actually forgot he was on the table at one point. 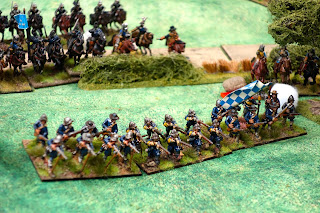 I gave the Swedes one regiment made up solely of shot as I understand that as well as the commanded musketeers which were made up of 'surplus' personnel, some units had 'lost' their pikemen, the latter trade not being a popular one in the Swedish army. 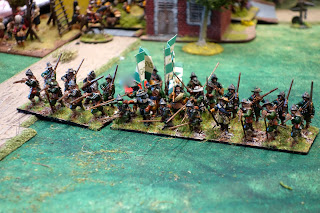 My German 'Green Regiment' bravely doing very little throughout the game other than cover my right flank after the Scots ran away. 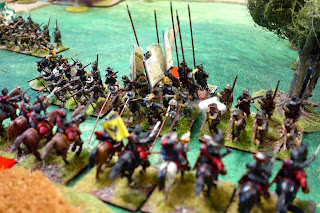 Another view of the German 'White Regiment' locked in combat with Imperial cuirassiers. 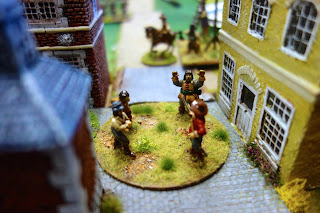 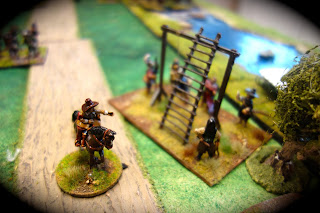 The Colonel of the Scots regiment which ran away so ignominiously receives the judgement of the court martial.

Well, it was a great game and a tough one, but quite exhausting if only because it was a very hot airless day, made worse by the fact that the Swedes deployed chemical warfare in the form of some fly spray when several wasps had the temerity to fly in through the open window!

We've not played with these rules for a while so were a little rusty but we soon got back into the swing. By lunchtime John and I thought that the Imperial army would be triumphant as it was pushing back our centre and had held up the flanks. All of a sudden it was another story as the Imperial centre collapsed in very short order and it was all over. Imperial casualties, in terms of losses, were pretty catastrophic at over 50%, but the Swedish losses were also almost 40%.

The sequence of play in Baroque took a little getting used to again but the game speeded up as the day progressed. Robbie was happier with the result than the previous week even tough the Imperial army still lost, but if I think that I was to adopt these rules permanently for the TYW I'd need far too much re-basing and reorganising. And I'd have to do my Poles too!

Next time I think we shall go back to the Seven Years War using Honours of War as its been rather a long time since the last time Frederick and Co were on the table.
Posted by Colin Ashton at 5:29 pm