As the title of the post suggests I've now finished the first formation for my French in Italy and Switzerland. I now have a full demi-brigade of three battalions, a battalion of combined grenadiers and a swarm of skirmishers. Some of these have been featured in an earlier post but not in their entirety. The figures are all Elite Miniatures from their "collectors' range". 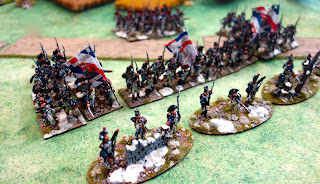 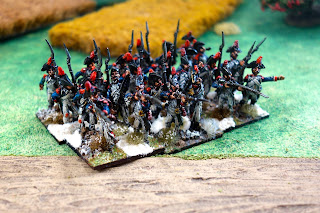 A second demi-brigade (Trent Miniatures) is almost done, as are two battalions of light infantry and another of combined elites. I've started on some artillery and commanders for both sides and expect to have the second fusilier battalion of the Rosenberg/Moscow Grenadiers done by the end of the weekend coming up.