This week it was the Thirty Years War (no not all of it!)

Yep, as the title says this week I thought I'd give my Swedes and Holy Roman Empire/Catholic League forces a long overdue airing. As usual Robbie and John joined me for the game. We threw dice to see who would be fighting on their own with the Imperial army and it was Robbie who drew, or threw, the short straw.

The forces were reasonably balanced on paper. The  Swedes had more infantry, of which three brigades  were very good, one was average and the other (the Saxons) was poor. The two very large Imperial brigades (three pike and six shot units each) were elite or veteran but lacked the firepower of their Swedish opponents. However the Imperial army was far superior in numbers and quality of horse, as they had twice as many cuirassier squadrons than the Swedes and one of their brigades was commanded by Pappenheim, which meant all the unit's got 'ferocious charge' and one got 'terrifying charge'. Robbie also had a bunch of Croats (four squadrons) and a dragoon unit. The Swede's best cavalry were two squadrons of Finns. I gave the Swedish cavalry attached commanded shot and a light gun. In terms of artillery, each Swedish brigade had an attached light battery and the army was supported by a battery of medium guns, while the Imperial army had two heavy and two medium guns.

Robbie's objective was to hold his position until the time we'd agreed to end the game while the rest of his army made good their withdrawal with their baggage train and siege artillery. Our objective was to defeat the enemy before the aforesaid end time (3:30pm) otherwise their main body would be deemed to have slipped away. 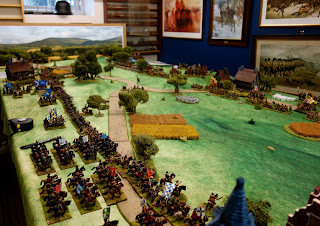 The field of battle, Swedes on the left, with all of their horse (12 squadrons plus commanded shot and guns) deployed on the right. 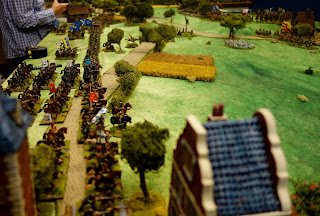 Three brigades of Swedish  horse poised to launch an all-out attack on Robbie's left wing. They would be supported by a general advance in the centre with the Saxons anchoring the left wing. That was the plan anyway...... 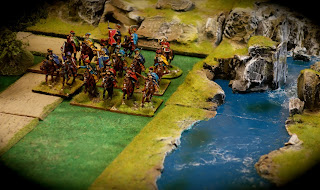 Pesky Croats lurking on the flanks. They're pretty useless in a stand-up fight but are good at hitting flanks, rears and disordered or shaken troops. 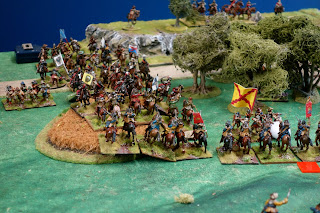 The Finns charged Pappenheim's command and not surprisingly came of worst. But the now damaged cuirassiers charged the following move and were beaten by the Swedish supporting squadron and forced to retreat. 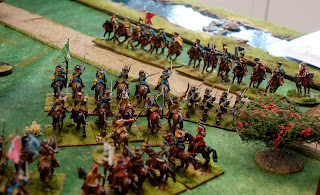 Those Croats again being annoying. One squadron was quickly disposed of by the commanded shot (fortunately). 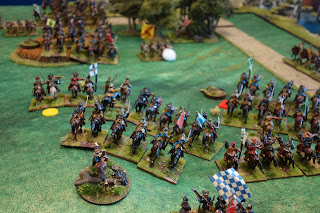 The Swedish right wing trying to carry out its orders (which as John pointed out repeatedly I appeared to have forgotten). 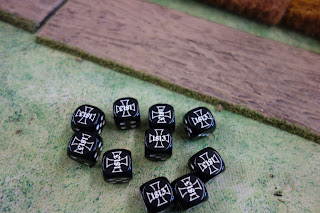 This is what I'd have liked to throw. 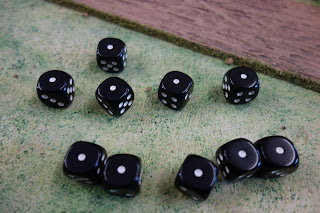 This is what I actually repeatedly threw! 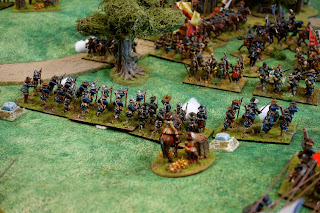 The veteran Blue Brigade advances towards the Imperial centre. 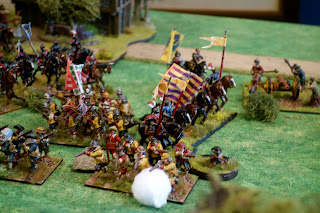 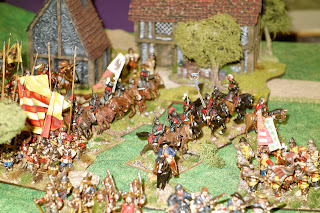 The Imperial army had deployed one brigade of horse in the centre so they were (slowly) moved to the left to counter the Swedish threat. 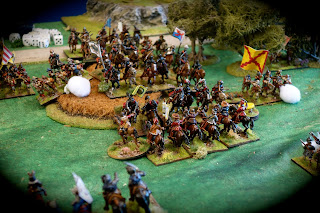 The melees continue on the Swedish right with the Imperial cuirassiers gaining the upper hand (just). 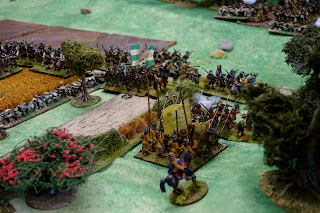 The Swedish Yellow Lifeguard Regiment and the German Green Brigade advancing towards the Imperial right on the hill. 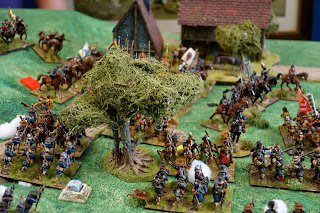 The veteran Blue Brigade charged the Imperial troops in the centre and broke them after a fierce fight. I had tried to use the 'Swedish salvo' rule (you get to shoot THEN charge). We had an interesting debate about this rule last year and reckon its not been thought through fully. Even the Warlord Forum were very quiet on the subject. Anyway, if the Swedes shoot and cause a break test on their target who then run away, do the Swedes still charge? Who will they charge? Anyway, we agreed that they would have to make at least one move as the break test could arguably be taken as a result of the volley and the sight of hundreds of unfriendly snarling Swedes running very fast in your direction. 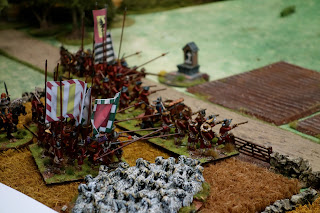 The Saxons (they're the ones in RED) slowly advance. About an inch. It was a very enthusiastic inch. I think they're badly done to in the rules but its fair to give the Swedes some unreliable troops to worry about. 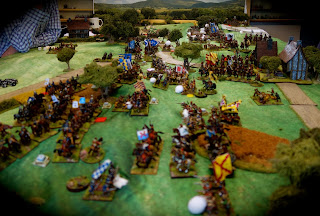 The battle in full swing. In the foreground the Swedish horse and commanded shot can be seen facing Pappenheim's elite cuirassiers and arquebusiers 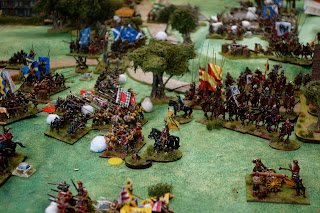 Seen from behind the Imperial left the Swedes look unstoppable.

Wallenstein's lifeguard (sorry about the blurry photo but I need it to keep the story going) charged a unit of commanded shot and drove them off but failed to break them. They followed through into some Livonian cuirassiers and Robbie threw his usual dreadful dice and they broke. 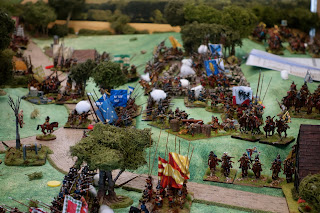 The Imperial troops on the hill were defending stoically but loosing heavily as the Scots and Germans assaulted their positions. 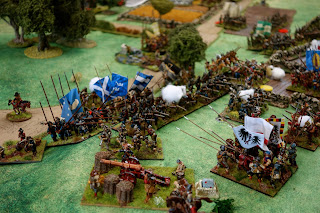 Scots mercenaries and Imperial troops locked in combat on the hill. The latter were forced to retreat with several units broken. 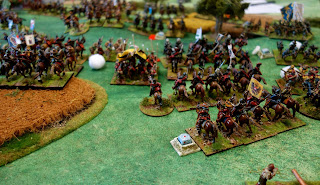 All of a sudden both of Robbie's battallia of foot reached the point where their losses put them over the threshold for a broken brigade. Pike and Shot are not as brutal as Black Powder so at least they didn't have to retreat. Saying that their saving rolls went to 6's only, not very good. The Swedes had cleared the hill and disposed of the Imperial infantry on the right . Robbie's horse on his right had remained stationary throughout the game but in the final turn managed to hit a unit of Swedish shot in the flank. I don't know why they didn't come forward earlier to threaten our left flank. Robbie's horse were actually pretty much intact so we reckoned that the army would be able to extricate itself and withdraw to fight another day. Definitely a Swedish victory as we'd cleared the hill and broken all of the Imperial foot, but not a decisive one.

In P&S Swedes can be deadly (I'm sure Robbie would say they ARE deadly) as their firepower is pretty much overwhelming, if one throws the right dice of course. I have organised each of my Swedish/German regiments with one base of pike and three of shot to try and reflect the Swede's tactics over the rest. When it works of course. The pike block is not quite as good as their opponents in terms of melee dice (one less), but this is offset by more shot. Of course the flip side is that Imperial cuirassiers (Pappenheim's especially) are equally unstoppable and its a rare day when a squadron of Swedish or Finnish horse come off better in any combat, but it does happen, and indeed did twice in this game when the Imperial cuirassiers were caught on the back foot and unable to charge.

Anyway, before the figures go back in their boxes they need quite a few pike reattaching. I might even refight the game next week, either changing sides, or using Impetus Baroque. Food for thought.

On a totally unrelated subject I have now finished five battalions of Russians and two and a half of French for my Suvarov in Switzerland project. I will put some pictures up shortly.