Nigel set up a 28mm Franco-Prussian War battle at the Club this week, again using Black Powder. The French were deployed on the table with a brigade in advanced positions holding woods on either flank with a third brigade holding a village in the centre. Two batteries of guns and mitrailleuse supported the centre while a brigade of cavalry lurked behind a wood in the centre.


(Below: various views of the French 'Position Magnifique') 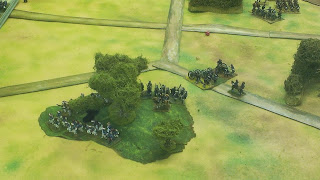 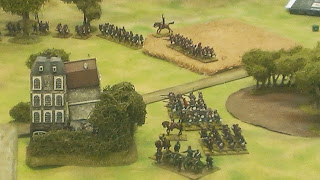 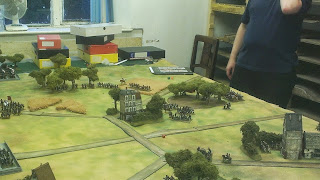 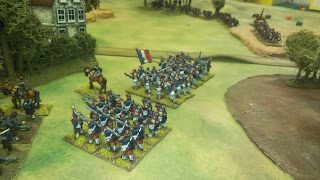 The Prussian were supposed to march onto the table, throwing randomly for each brigade to see which road each would enter on. Over the half of them ended up entering the road facing the French right while the other two were due to enter one  in the centre and the other against the French left. Well that was the plan. Paul used his C in C to try and get all his troops on table and managed a mere one move. This meant that as the other Prussians were too far away the Prussian turn was over as the C in C is the last commander to give orders. Paul still managed to cause some casualties on the French holding the wood and disordered a regiment in a cornfield. 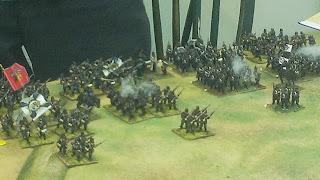 The French didn't need to do much in their turn except for throwing a regiment out onto a hill on the far right flank. Their command throws were quite bad anyway. They did manage to disorder and shake a Bavarian regiment with long range Mitrailleuse fire which was fun. At the end of the turn we threw for reinforcements and on a score of a 6 were destined to enter on the left flank in the following move. 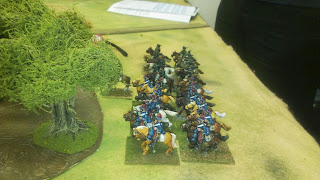 (French cavalry reserve lurking out of sight)
Turn 2 and the Prussian right and centre failed their command rolls so were unable to enter the table. The Prussian left boldly charged the Frenchmen the hill and in the woods. The latter withdrew but the other regiment failed miserably with their closing fire and while disordering both units charging them, failed to cause enough damage to stop them. However, they survived the melee and subsequent break test. In the centre the cavalry moved pver to the roght flank and a Turco battalion blundered and stopped all movement. The reserves made a very slow entrance onto the table thanks to my usual poor dice throwing. The mitrailleuse missed and there wasn't much else for the French to shoot at. In the French melee turn their regiment lost the fight and broke.

Turn 3 saw the Baden brigade enter the tale in the Prussian centre and promptly do a right turn and march off to the right flank. On the right the final brigade made it onto the table and advanced towards the woods, occupied by Turcos and Chasseurs a Pied. 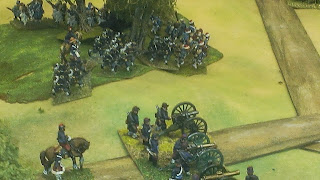 (Above: French infantry, artillery and mitrailleuse batteries in support, on the left flank) 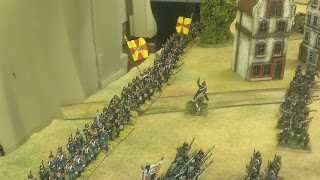 (Above: The Baden brigade make their entry. Below: French reinforcements slowly arrive on their left flank) 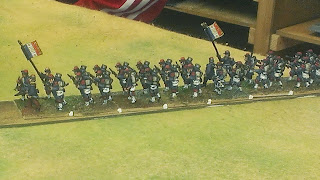 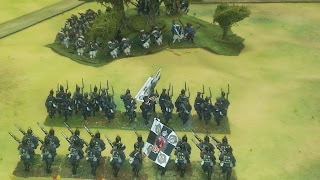 Sadly, that was when I had to leave I remembered I'd left the iron on in my Metz apartment. In truth I  I had a very early start on Friday so hopefully someone can fill in the detail and report the outcome of the battle in the comments section of this entry. Figures are all Foundry from the collections of Nigel and Conrad.