Charge of the Heavy Brigade 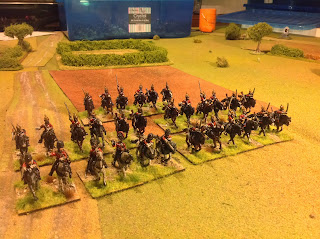 Finally based up, the five regiments that make up the British heavy cavalry brigade for my Crimean War army.  V nice Foundry figures although the brigadier (see below) is a Great War Miniatures head swap. The brigade was made up of the 4th (Royal Irish) and 5th Dragoon Guards, the 1st (Royal) and 6th (Inneskilling) Dragoons and the Royal Scots Greys and was commanded by General Sir James Yorke Scarlett. The second photo shows the cavalry division commander, Lord Lucan (Or "Look on" as he was dubbed) together with an intrepid aide de camp closely resembling David Hemmings and the redoubtable and short-sighted Scarlett himself. 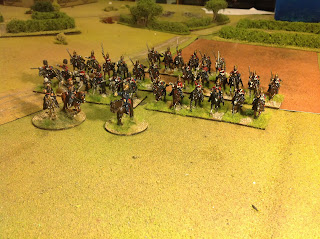 Apparently, in the 1968 Tony Richardson movie "Charge of the Light Brigade" the charge of the Heavies was filmed but was edited out of the final cut, as was the actor Lawrence Hervey who was playing a Russian Aristocrat/general but who fell out with the production team and ended up on the cutting room floor! I remember seeing a still of the Heavies in an article by one of the Mollo's in a wargames mag hundreds of years ago but sadly it never made it to the silver screen. The version of the movie available on DVD is also severely cut, for example, it doesn't have the scene where Nolan and Morris of the 17th Lancers are on an early morning ride and meet up with a piquet frying eggs for their breakfast. The piquet includes the actor Norman Rossington who played the Sgt Major of the 13th Hussars whom Cardigan had flogged and dismissed for not snitching on Nolan. He rejoins the 17th Lancers as a Private (no Troopers pre 1920s, except the horses of course). Nolan and Morris eat  their breakfast as if it is their right to do so! Cracking movie! If my troop commander had eaten my egg banjo back in the day there would have been hell on! I had a copy on DVD but lost it so it is on my Santa list.
By Colin Ashton - December 18, 2013