Rob, John and Paul ventured up for a game on Sunday. Waiting for them I had organised and set up a 28mm refight of Gustavus' first great victory in the TYW, namely the Battle of Breitenfeld. We threw for sides and Rob and I took the Imperial and Catholic League forces. John and Paul had the combined Swedish and Saxon armies.

In order to reflect their generally rubbish performance on the day, the Saxons were all classed as militia and their commanders were rated as 6. Anyone familiar with The Pike and Shotte rules will know how bad that made them!

The Swedes were much better, with the yellow brigade being classed as Elite and stubborn while the blue brigade were elite. Swedish generals of foot were graded 9while those of horse were 8's. Gustavus was a whopping great 10!

The Imperial commanders were graded 8 for those leading foot and 9 for the horse commanders. Tilly   was a 9. Anyone with 12" of Tilly taking a break test would be allowed to re roll if they failed it. Had we remembered that rule it would have come in very handy for the Imperial left flank but hey ho! 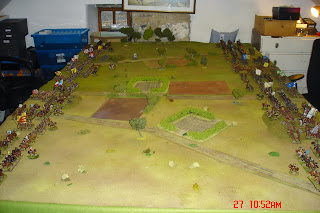 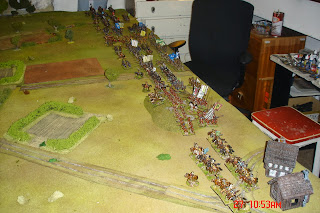 (Above: the Swedes and Saxons. Below: The Imperialists) 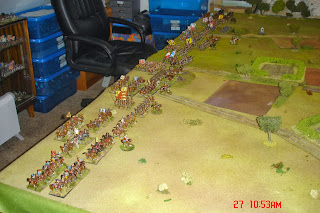 I deployed the troops as closely as I could to their historical dispositions and also prettied the table up a bit with a few hedges, fields etc. The Saxons were deployed on a hill on the allied left flank, their foot flanked by brigades of horse. The Swedes deployed a small brigade of horse next  to the Saxon right, then came the mass of Swedish infantry, 7 regiments grouped into 4 brigades, supported by regimental artillery. On the Swedish right were 10 squadrons of horse (including 2 each of Cuirassiers and Finns) supported by 2 units of commanded shot.

To counter this the Imperial army were deployed with 5 squadrons of Cuirassiers, 1 of Harquebusiers and a unit of commanded shot on the left flank. There should have been another infantry tercio attached to this wing but I forgot to put it on the table!) In the centre were 8 regiments/tercios, grouped into 3 battalia, and supported by 2 batteries of heavy guns. The right flank comprised 2 squadrons of Cuirassiers, 3 of harquebusiers and 2 of Croats. A lone Imperial tercio was also deployed amidst the cavalry. There was also a small reserve of 3 squadrons of Harquebusiers. 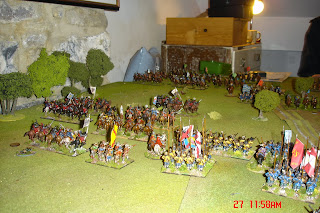 (Above: the Imperial left flank. Below: the Swedish centre advances) 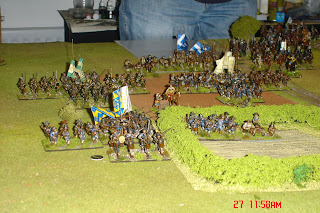 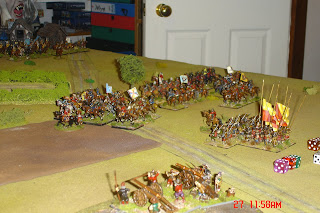 Above: The Imperialist right flank. Below: 'Father' Tilly the Imperial commander immediately after he rolled a double 6 and blundered!!!!) 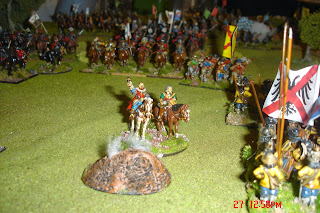 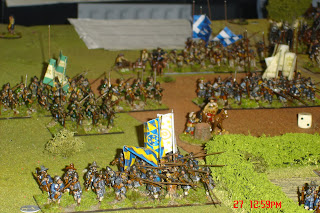 (Above: close up of the Swedish attack in the centre just before it faltered. Below: Rob's right wing clash with the Saxon horse) 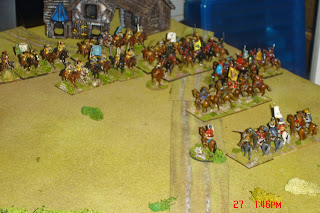 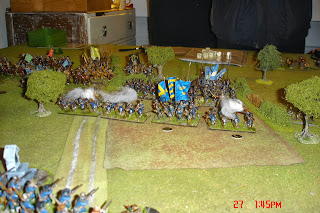 (Above: John's 'Blue Brigade' of elite Swedish infantry closing in on the Imperial left flank. Below: Imperial Harquebusiers) 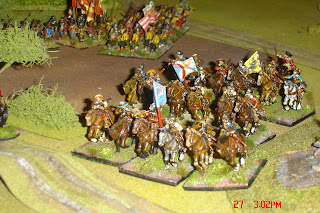 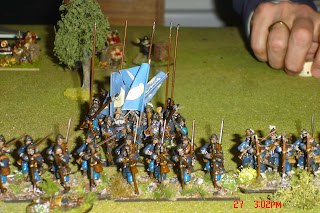 (Above: Close up of the Swedish 'Blue Brigade'. Below: Imperial Harquesbusiers from the right flank plug the gap in the Imperial centre) 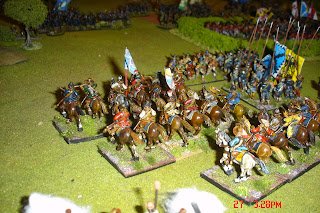 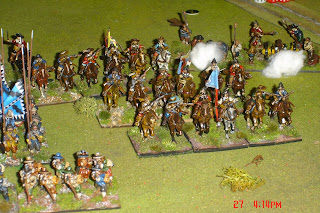 (Above: Close up of Imperial Harquebusiers in the centre: Below: The Imperial centre and left flank seen from the Swedish side) 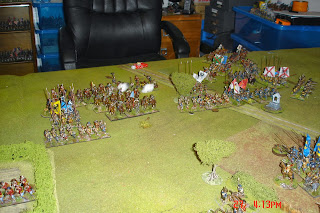 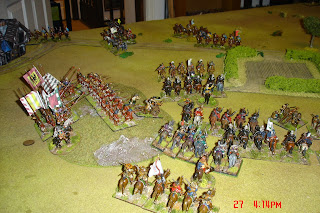 (Above: The 'gallant' Saxons holding their ground. Below: The fight for the centre as the Swedish attack falters and is thrown back) 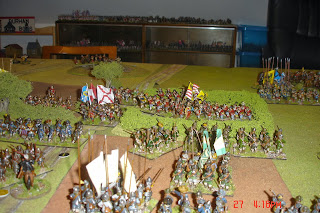 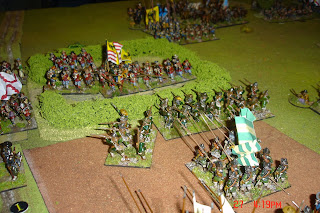 Above: Close up of the fighting in the centre. Below: A birds eye view at the end of the battle) 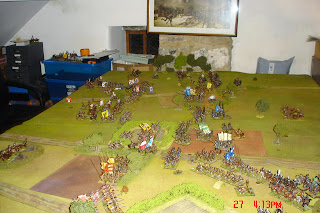 On the Imperial right Rob's troops took about three moves to start moving forward. Indeed one of his battalia blundered on move 1 and turned about and left the table for two turns! His Croats steadfastly refused to move as well which meant that our 'master plan' to screen and largely ignore the Saxons and press home an attack on the Swedes alone went up in smoke. Imperial and Saxon horse did clash and the latter were predictably driven off and their brigade shattered.  The Saxon foot less one unit of shot did survive the battle but their other cavalry brigade failed to join the battle.
In the centre Paul's Swedes advanced pretty rapidly and a protracted combat and exchange of fire took place along the battlefront. The Swedish attack in the centre was halted and forced back but elsewhere on the right-hand half of the table the armies were unable to close.
In my half of the table on the left, my 6 squadrons of horse held off more than twice their number of Swedes, destroying one brigade before themselves being shattered and forced from the field. My infantry were successful in slowing down John's attack (helped by a few blunders) although it has to be said that at the critical time my CinC (Tilly) blundered when attempting to restore the strength of one of my shaken cuirassier squadrons.
My heavy guns were quite effective for much of the game but I threw the 'wrong' dice and they were deemed to have exhausted their ammunition. This left a nasty whole in the centre, thankfully plugged by 3 squadrons of Harquesbusiers which had been withdrawn from the right flank. ﻿
When we had to call it a day, after over 4 hours of game time, the positions were as seen in the last photograph. Both sides had lost a cavalry brigade (ok, the Saxons had lost one as well but I had decreed at the start of the game that any Saxon losses would not be counted). Some of the Swedish infantry was pretty badly mauled as were a couple of Imperial regiments. Had we gone on the Imperialists would have been hard pressed to hold the Swedes off on their left flank, although in the centre and right it may have been possible to make some head way. We declared it a draw and so ended the refight of Breitenfeld. Not quite the stunning victory of Gustavus' real battle. Most important of all though, the game was challenging and enjoyable, and great fun was had by all.
By Colin Ashton - December 09, 2013