Playing with the Devil in another Thirty Years War game.

Robbie was up this week for a rematch. I made a few changes to the terrain and a couple of amendments to the armies, but not much. The Catholic League/Imperial forces were given a redoubt within which to place some of their guns and one of their cavalry commanders was 'promoted' to Pappenheim, giving his brigade of horse some rather nasty advantages, i.e. one unit of cuirassiers was given the 'terrifying charge' rule and all other units were given 'ferocious charge'. The Swedes were unchanged from the last game. I played the Swedes again.

Robbie deployed in a traditional way with cavalry on both wings with a strong centre of infantry. He placed his redoubt on the right flank. I deployed all my mounted troops on the right flank, the Yellow brigade on the left, and the Blue and Green in the centre. The Catholic League went first but in miserable set of command rolls pretty much remained where they were. My right wing horse also failed to advance very far if t all. In the centre the Blue brigade failed its command roll; in fact they only passed ONE in the entire game! The Yellow brigade moved to the bridge and river to secure my left flank and the Green brigade advanced albeit slowly, towards the enemy. 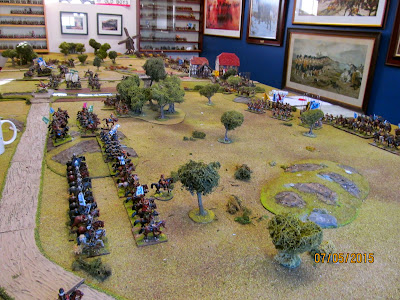 Above, the armies deployed for battle, and below, the Swedish right wing, including the cuirassiers who blundered almost off the table in their first move! 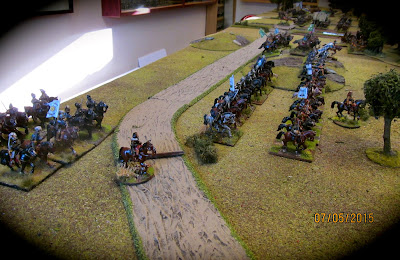 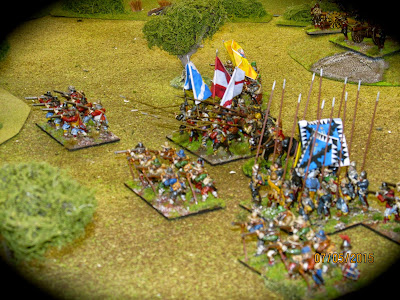 Above, the Imperial left wing infantry battalia and below, Pappenheim's cavalry brigade. 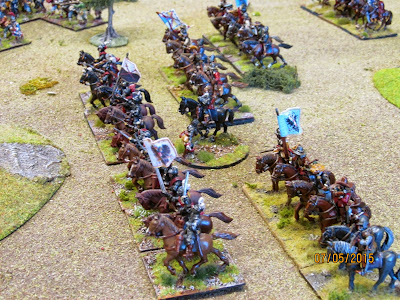 The Swedes managed to charge into Pappenheim's brigade who were caught at the halt, thus loosing their advantage. Sadly, the Finns and Swedes were eventually driven off broken but not without seriously damaging Pappenheim's cuirassiers and harquebusiers. Robbie charged my unit of commanded shot (below) and utterly routed them. The cavalry of both sides wore each other into the ground until two Swedish brigades and Pappenheim's brigade were broken. Robbie's Croats managed to cause enough of a nuisance to stop my remaining brigade from doing anything for the remainder of the battle. 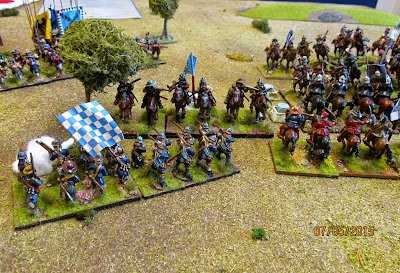 (Above, the end of the Swedish commanded shot and below, the Finns and Swedes clash with Pappenheim's cavalry. 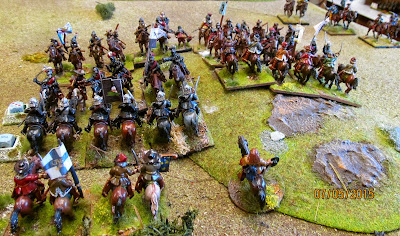 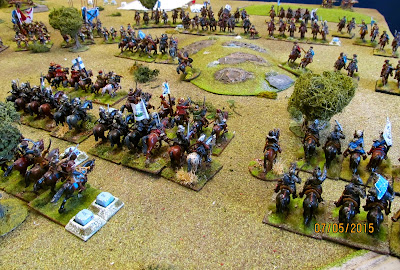 Above, both sides stand off, worn out shaken and broken by the combat on the Swedish right flank. Below, Imperial infantry on the attack. 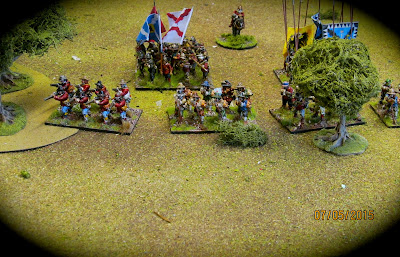 Below, the Swedish Blue brigade. This was the nearest they got to the enemy having failed all bar one of their command rolls. Even the parson was unable to intercede on their behalf. 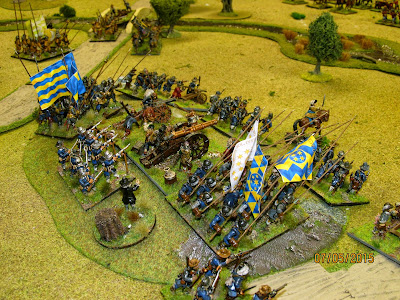 On the Swedish left, the Yellow brigade held off probes by Croat cavalry. The Catholic League grand battery was largely masked and ineffective throughout the game. Robbie moved his right wing horse along his rear in an attempt to switch flanks but in the end they made little progress and ended up shoring up the faltering infantry in the centre.

The Swedish Green brigade crossed the river and assaulted Robbie's centre, successfully shaking and pushing back his veteran regiments, despite taking close range artillery fire and being charged by Tilly's lifeguard.

In the end the Catholic League/Imperial forces were ground down and would we reckoned have made a fighting retreat before the majority of the Swedes crossed the river. With almost no cavalry left the Swedes would not be pursuing. Neither side had a significant advantage so as the Swedes would retain possession of the field we declared it a 'winning draw' for the Swedes.

Oh, the other highlight of the battle was the departure of Gustavus who was attached to one of his horse squadrons when they broke. The ignominy of it!

One point in the rules caused some debate. The new supplement allows Swedish shot to fire during a charge. We decided that the Swedes would fire BEFORE the defender's closing fire, giving them the chance to disorder their target and gain some advantage in the melee, assuming they made it. Was that right? Seemed so but the rules make no mention of how to deal with the 'Swedish salvo'.