Robbie and John were up again last week. Robbie asked if we could do a Thirty Years War game using the new Pike and Shotte supplement. I had just received my copy and was interested in having a go. Before carrying on I have to say that whilst a very pretty book with lots of eye candy I'm not sure about the provenance or accuracy of some of the 'army lists', my first impression being that the armies were mostly designed around the figures available from Warlord Games. They're all very 'samey' and everyone gets to have a storming party! That's my cynical old git view anyway and I am happy to be proved wrong. There are also some very 'interesting' takes on troops types and capabilities and some of the historical background stuff is not IMHO that well researched or too general. My biggest attack of the squirms came when reading the refight of Breitenfelt. Now I have refought this in the past and intend to again on my bigger table. It just didn't look right and there were too few troops. Anyway, like I say I was happy to give them a go, as if nothing else they give everyone be they veterans or newcomers a solid framework within which to play an enjoyable war game. Original research can't be beaten though.

Right, we diced for sides and Robbie got be the combined Catholic League/Imperial army leaving John and I to split the Swedes between us. The Swedes' objective was to capture and hold all the river crossings in order to get their baggage across and so continue their march deep into Catholic territory devastating it on their way. 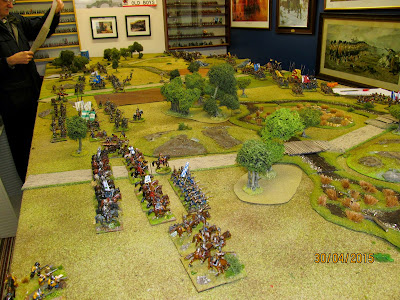 The armies were as follows:

All the commanders were rated 8. One of the infantry battalia was classed as elite veteran Bavarians, one as veteran troops and the other as run-of-the-mill mercenary troops.

The Swedes were led by Gustavus himself who is rated as a 10.  All the other Swedish commanders were rated as 8.

Changes and additions to the rules include a 'Swedish Salvee' rule where Swedish musketeers can fire before charging, a 'Swedish feathers' rule (although I am unsure if they worked and/or were used in Germany) and some changes to the morale saving rolls needed for the better class of infantry, e.g. previously musketeers saved on a 5+ but this has been improved for many to a 4+. The rules also include additional factors to take into account of fighting with the advantage of higher ground which was an omission in Black Powder and the original Pike and Shot rules.

On to battle. The Swedes moved first. John's horse on the extreme left managed three moves and swept round the wood and into a unit of Rob's cuirassiers. The infantry of the Yellow and Blue brigades moved forward but the Green brigade failed their command throw. The Finnish and Swedish horse on the right edged forward towards the river while the guns deployed on the hill. My dragoons made it over the river but were charged by Robbie's Croats and forced back. 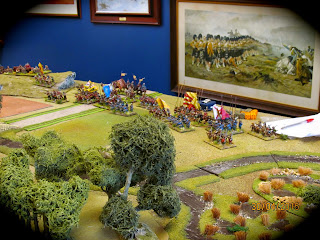 Above and below, the Catholic centre deployed in readiness for the Swedish assault. 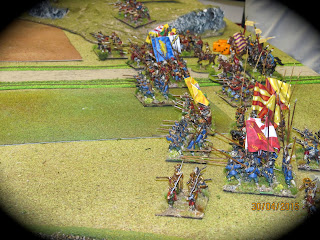 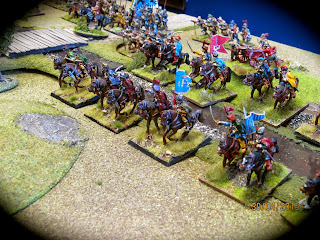 Above, Robbie's Croats cross the river before charging the Swedish dragoons and driving them off. Below, the Swedish Blue brigade advances. 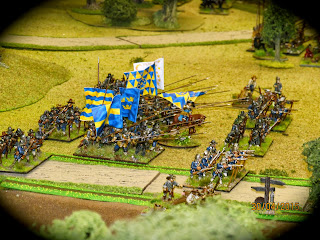 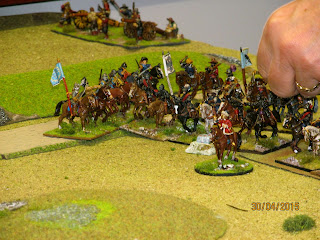 Above, The fickle finger of fate as the Catholic League cuirassiers are hit in the flank by John's Swedish horse. The cuirassiers were pushed back in disorder. 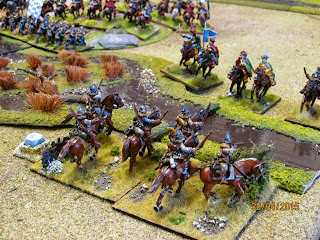 Above, the shaken Swedish dragoons rallying behind the stream. The Croats facing them were soon shattered after being hit in the rear by a squadron of Finnish horse. 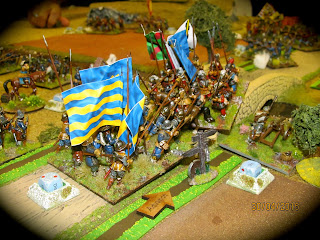 Above and below, the Blue brigade reached the river bank when an Imperial pike block charged over the bridge. In the melee the Swedes pushed back the Imperialists after a protracted push of pike. 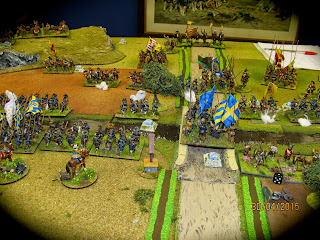 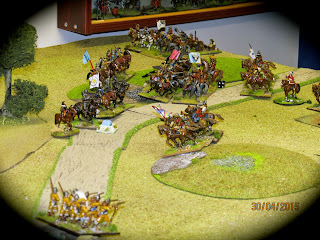 Above, the Catholic right flank was pretty much shattered by the Swedish horse and in a fairly brief period of time both brigades of cuirassiers and harquesbusiers were shaken. They, or at least the unshaken squadrons, did however pose a threat to the Swedes and continued to slow down their advance. 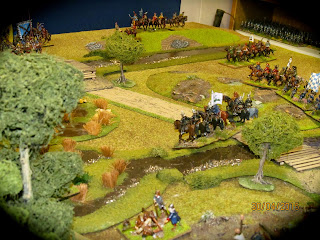 Above, on the Swedish right the Croats were driven off but the Swedish horse were left exposed to musket and artillery fire which broke one squadron before they could be extricated or get into a position where they could attack. The Finns failed to get across the river to charge the artillery so the moment was lost to roll up the Robbie's left flank. 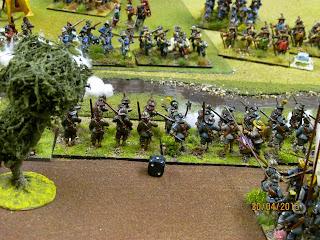 Above, Swedish and Catholic League infantry shoot it out over the river with no side gaining a real advantage until the Swedish light guns were brought up to point blank range.

So, Robbie's right flank had been shattered and his left was in a 'stand off' with the Swedish right under fire from the Swedish artillery which had finally got the range. In the centre the Yellow brigade was halted but the Blue brigade was winning its fight with the Catholic League infantry facing them  who were close to breaking.  We called it a day and declared a  Swedish victory.

The rules in the new supplement did work well. The Swedish infantry fire power was quite deadly, as were the Swedish and Finnish horse if they caught the enemy stationery (cuirassiers and harquebusiers can't counter charge). As usual it was command rolls, or the failure to make them, that scuppered Robbie's troops, and three blunders!

We're having a rematch this week so I expect a different outcome.
By Colin Ashton - May 07, 2015