The Prussians have outflanked the Austrian army outside Prague and have begun to attempt to turn its flank. The Austrians are able to react and mass their cavalry on what is now their right flank and rush grenadiers and artillery forward to try and hold off the Prussians while the rest of the army changes position.

Above, the massed Austrian cavalry on their right wing and below, two lone grenadier battalions in the centre, supported by battalion guns. 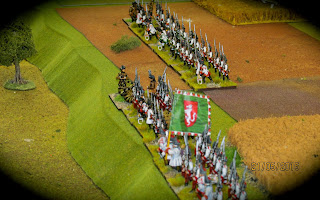 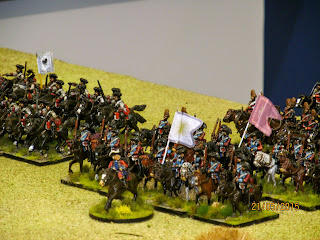 Above, close up of the Austrian cavalry which failed to get moving as quickly as Robbie would have liked! Below, Frederick watches as his leading brigade closes with the Austrian grenadiers. 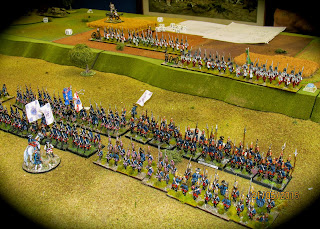 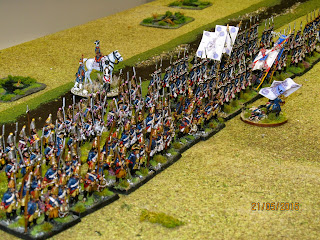 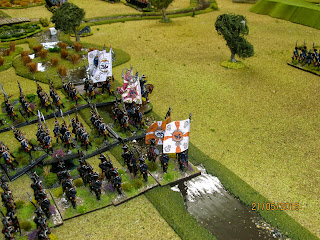 Above, the second Prussian brigade crossing the stream. 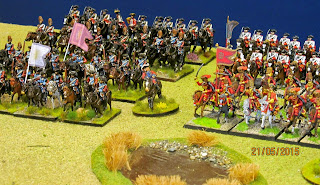 Above, more stationary Austrian cavalry. Below, the Austrians finally manage to charge and hit the Prussian hussars hard, pushing both regiments back. 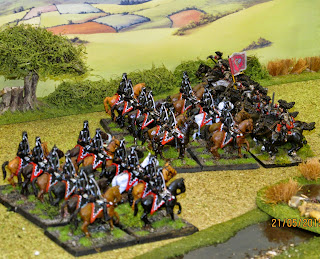 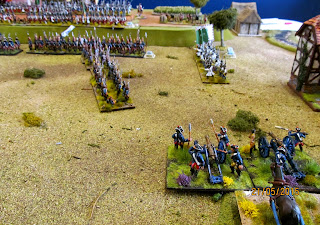 Above, the lead Prussian brigade was beginning to waiver due to severe losses as they engaged in an uneven firefight with the Austrian grenadiers, supported by battalion guns and a battery of heavy artillery. Robbie tried to enfilade the Prussian line but only succeeded in giving the newly-arrived Prussian artillery a wonderful target. 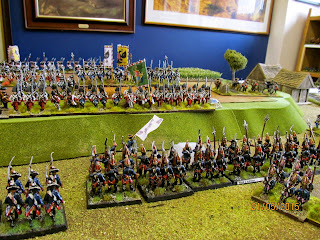 Above, the Prussian leading brigade fails to make any headway against the combined grenadiers and artillery and is on the brink of being broken as half its units are shaken. Below, Prussian cuirassiers crash into and over an Austrian battery after breaking a regiment of hussars. Below, Prussians stalled at the foot of the slope. Both regiments in the picture IR18 and IR23 are shaken and about to retire. 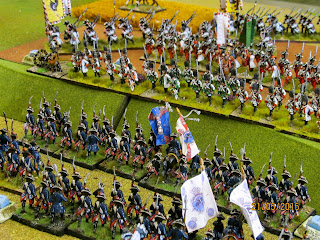 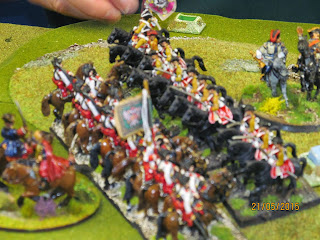 The Prussian cuirassiers turn after overrunning the Austrian battery and are hit by fresh Austrian cuirassiers. They are beaten in the combat and driven off the battlefield. Below, Austrian-eye view of the second wave of Prussians advancing towards them. 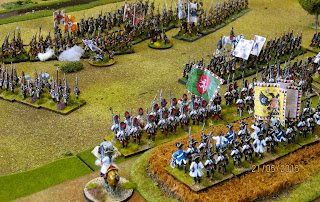 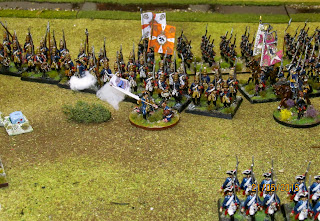 IR16 Dohna led by Marshall Schwerin on foot with a discarded colour lead the second wave of the Prussian assault. Below: Frederick (on the grey horse) organising his reserves for the next assault. The third Prussian brigade can be seen in the distance and the final Prussian reinforcements have just arrived. 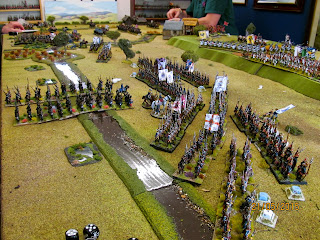 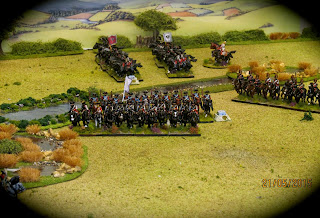 Above and below, the Austrian cavalry had driven off the entire Prussian cavalry wing of three brigades. They were ready to wheel and pounce upon John's infantry and artillery. Sadly for Robbie he couldn't get them to move, but John also failed to realign his cannon to cover his exposed flank. 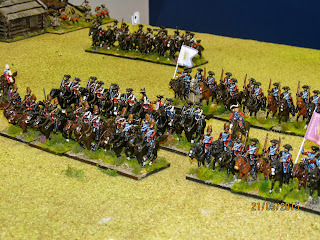 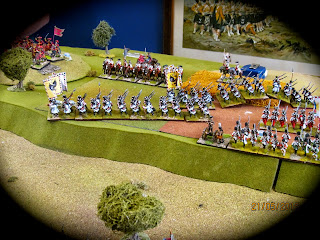 Above, Austrian reinforcements arrive in the knick of time as both grenadier battalions were close to breaking after holding up the first Prussian assault. Below, the second Prussian assault begins. 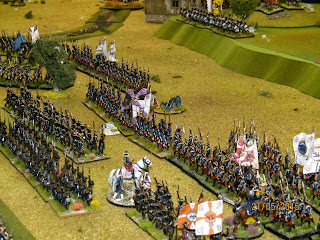 Below, the Austrian line has virtually collapsed as the Prussians surge forward. 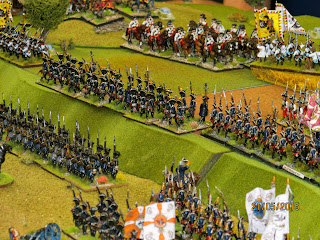 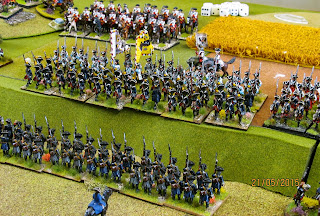 Above, all or nothing Robbie sends his remaining infantry forward in a bayonet charge to try and drive the Prussian off. Both battalions suffer fro close range musketry and are pushed back or broken in the combat. Below, the Austrian cavalry finally get moving again but their frontal charge against the guns is doomed to failure. 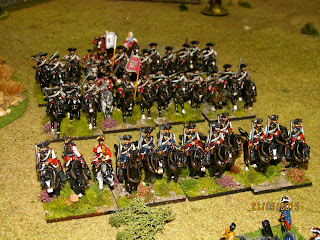 Below, the Prussian artillery supporting the final attack. 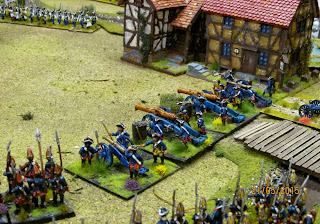 Below, the last of the Austrians, three battalions, have just arrived in time to cover the retreat into Prague. The Prussians have no cavalry left to prevent them from getting away. 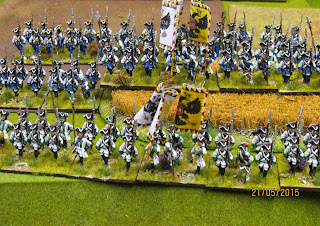 Well, it was a long hard slog. The Austrian grenadiers held up then drove off five battalions of Prussians for most of the game before they were ground down and forced to retire. John did well with his outnumbered cavalry as he prevented the Austrians from rolling up the Prussian left flank, even though all eight regiments were put out of action! Marshall Schwerin survived the day, but was still a bit of a bullet magnet. Even when the unit he was with was took massive casualties and Robbie got to throw six D6 to try and kill him - not one six was rolled! Marshall Browne also made it through the day without getting in the way of a cannon ball. The only 'blunder' of note was a precipitous charge by one of John's battalions up the hill towards the Austrians.  They were beaten back but it gave us a bit of breathing space while we lined up the next main assault.
The Austrians did really well and almost pulled it off. Had they broken another brigade of Prussian infantry the Prussians would have had to call off the attack and retreat. With no cavalry left that would have been messy!Sadly, the Austrian centre crumbled almost as soon as the stalwart grenadiers were forced to retire.

The battle ran almost the same course  as the original, as the Prussian cavalry and first assault were beaten off before weight of numbers began to tell and the Austrian line collapsed. Great game which we all enjoyed.
Next month Kolin!
By Colin Ashton - May 24, 2015