Well, we played the long-awaited refight of Mollwitz this week. I cocked up a bit on the left flank and the Austrians lost one of the few chances they had of winning, albeit a slim one, and were crushed. FIN.

Seriously though, we diced for sides and Paul and I had the pleasure of taking the Austrians while John and Robbie had the Prussians. The roads, marshes and streams were there for show as the ground was covered in snow and frozen. We used 66% distances for everything to allow for the effects of the snow and weather. The orders of battle can be seen on the previous post so here's how the game played. 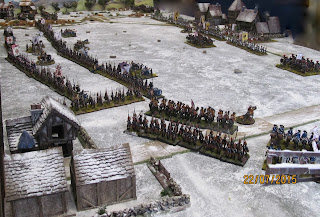 The armies deployed prior to the commencement of the Prussian attack. 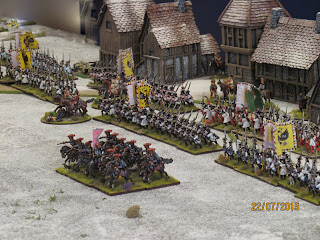 The Austrian centre deployed to the front of Mollwitz 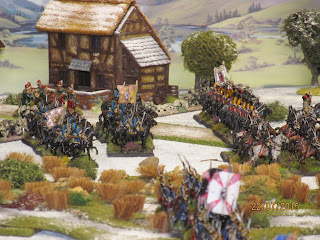 The Prussian left, and below the Austrian right 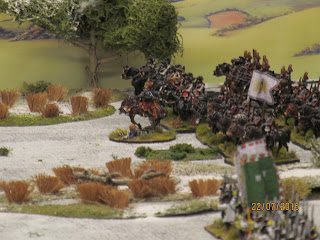 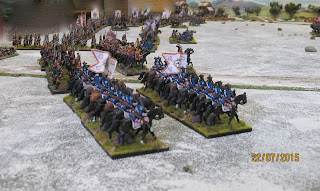 My newest unit of Prussian dragoons set to do great things in their first game........not 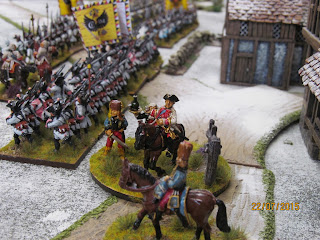 FML Neipperg samples a glass of brandy, accompanied by his manservant Curt and his mistress Countess Ingrid von Pitt.(ok showing my age) 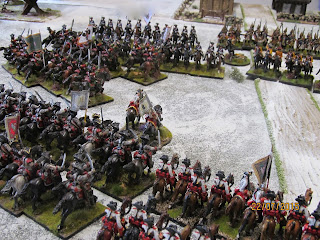 The cavalry on the Austrian left flank crash into the Prussian cavalry who will be completely shattered as a result by the end of the first move. 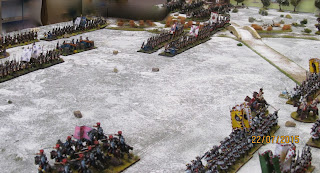 The Prussian infantry in the centre advance. 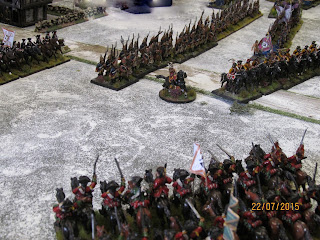 This was the point I bottled it. Having driven off most of the Prussian cavalry I should have tried to exploit my success, but I chose to regroup instead and the moment was lost. 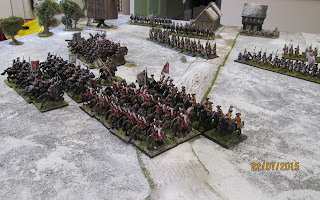 Robbie threw the final cavalry unit on the right straight into the Austrian cuirassiers, but, unsupported, they were destroyed. 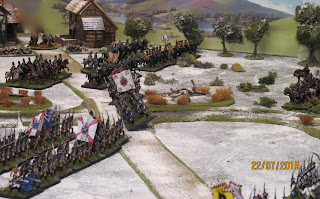 On their left the Prussians were slow to advance, but not as slow as the Austrians who refused to move. 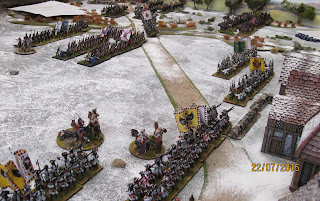 A large gap previously occupied by the Austrian Los Rios regiment. They were pounded by Prussian artillery and musketry and eventually broke under the pressure. 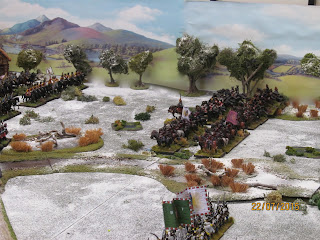 Paul's cavalry on the Austrian right finally got moving after a slow start. 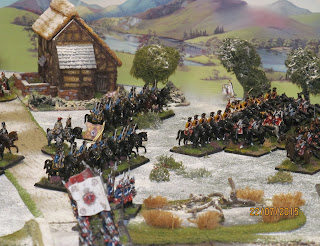 They charged the Prussian cuirassiers who were unable to countercharge and drove them back. 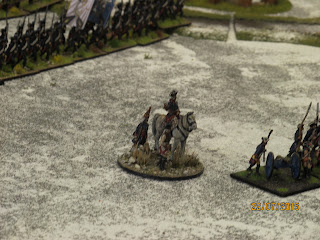 Frederick on the 'Mollwitz Grey' just to the rear of the Prussian first line. 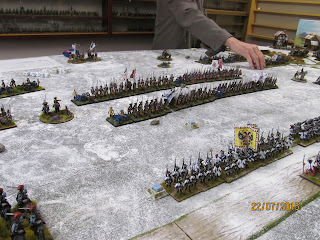 The Prussian infantry advances closer and closer, apart from the rear two battalions that threw a blunder and retreated in the confusion. 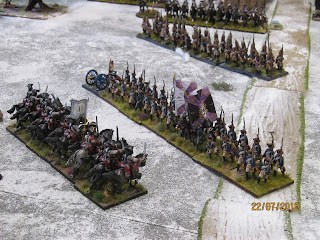 One of several attempts by the Austrian left wing to punch a hole through the Prussian line. 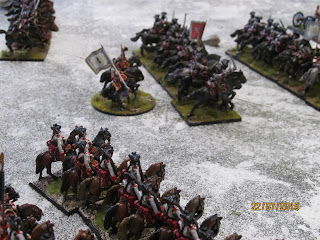 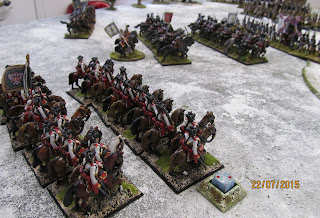 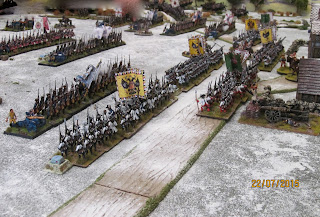 The centre of the Austrian lines before it began to crumble under the incessant pressure from the Prussian advance. 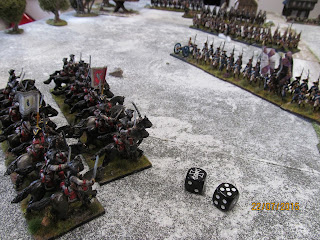 Almost the final chance for the Austrian cavalry to burst through the Prussian right flank. The target battalion was dangerously exposed, unsupported, and unloaded.....10 or less and I would get in, and I threw an 11 on my command roll so failed to charge! 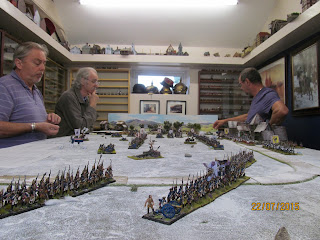 Robbie, John and Paul all deep in thought. 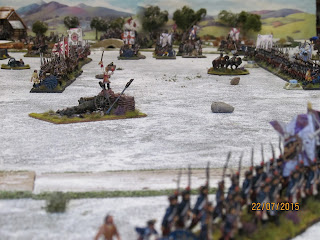 Looking down the battlefield from the Prussian right. 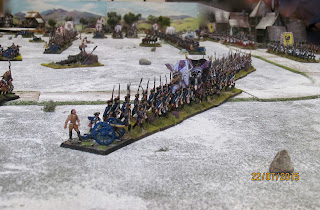 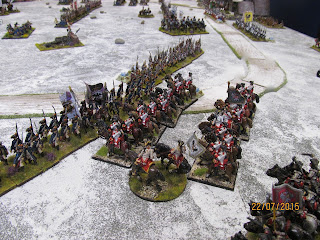 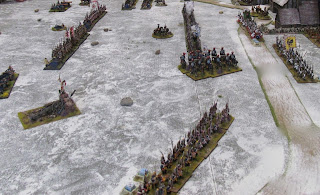 Above and below, Austrian hussars catch Prussian II/IR15 in the flank. 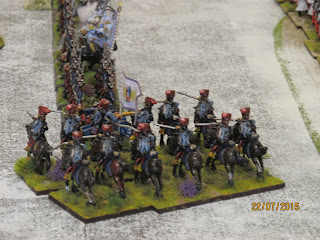 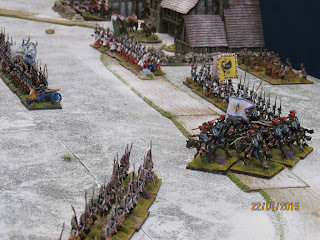 The Austrian artillery had finally made it onto the battlefield. Out of shot, a 12pdr battery hit the grenadier battalion seen here and tipped them over the edge. Robbie failed their break test and they routed.

The loss of the grenadiers together with both cavalry brigades was enough for Frederick to have to roll on the 'Frederick leaves the field' table. He can be seen here leaving the battlefield having failed the test in the moment of victory as the Austrian army was shattered.

It was a good game despite the fact that I blew it! I was too timid in move 2 and should have exploited my success in destroying the Prussian right wing cavalry by sweeping round the open flank. One move later and the Prussians had plugged the gap so true to history the moment was lost forever and I spent the rest of the game battering my cuirassiers and dragoons against Robbie's infantry.

By the close of the battle Paul's right wing cavalry had also managed to destroy John's cavalry on the opposite flank, but exhausted themselves in the process. Our infantry were no match for the Prussian automatons and although they did well in holding up the advance for quite some time, the outcome was never in doubt, especially thanks to the very late arrival of our artillery.

The new winter terrain mat looked good and only Robbie began to complain of snow blindness. Thankfully nobody ate the snow, yellow or otherwise.