The guys came up this week to fight the next game in my attempt to refight the major battles of the seven years war in sequence. Ok I'm concentrating on the 'East' but that's still plenty of games to look forward to.

This week we  did Gross Jagersdorff. I refought this battle early last year but wasn't happy with how I'd set it up so this is the ideal opportunity to have another attempt. I decided to reorientate the table slightly and ignore the troops in the bottom right of the map below (Holstein's Prussian cavalry and Sibilski's mixed Russian division) as they spent the entire battle occupied with killing each other and didn't interfere with the main actions around the Norkitten Wald in the centre. The Norkitten Wald was classed as an open wood with 12" visibility and half speed movement for all troops.

Rather than regurgitate what happened here's a link to the excellent Kronoskaf website http://www.kronoskaf.com/syw/index.php?title=1757-08-30_-_Battle_of_Gross-Jägersdorf 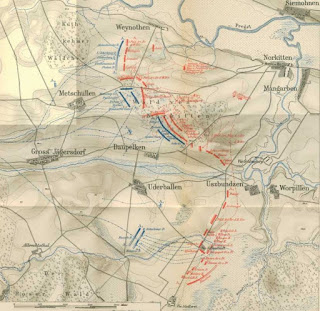 We diced for sides and Robbie and Paul Stevenson played the Russians while John and I took the Prussians. The forces involved were as follows: 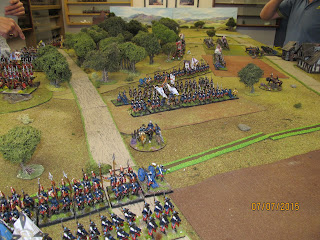 The game started with a general advance by the Prussians, although I was wary of the Russian guns facing my cavalry and infantry. Robbie's commanders were pretty poor so he wasn't immediately able to try and outflank John's Prussians in the centre. John unlimbered his artillery and started to pound the Russians in the Norkitten Wood, without as much effect as we would have liked. Robbie's infantry were spread right across the front from the centre of the wood to the left flank and getting them to move was going to be difficult but once they did they were to be a nuisance to John's assault on the wood. 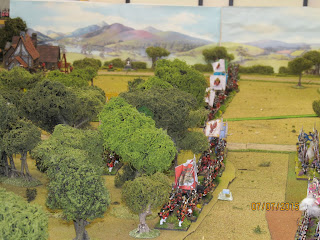 Lupochkin's brigade holding the wood and extending off into the distance facing von Goltz's brigade. 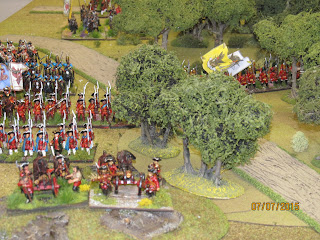 Browne's brigade deploying to face the Prussian threat. Their heavy cavalry appeared to be rooted to the ground the whole day although their infantry and artillery were much more aggressive. 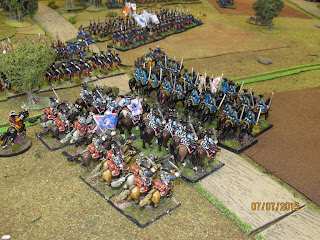 Schormeller's dragoons move round the rear of Dohna's brigade as they switch flanks to counter the Russian advance on the right. The hussars were left to cover the left flank and exploit any opportunities. 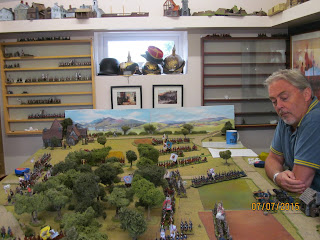 Early in the extended fire-fight between the Prussians and Russians on the edge of the wood one of Robbie's units was forced to take a break test. As a result they were required to withdraw. Now, the Russians are pretty stoic so I allow their infantry and artillery to re-roll one break test per game.  Robbie elected to re-roll as the withdrawal would leave a large gap in his line. The result was an even worse die roll and his battalion broke! Hence Robbie's glum expression. John's grenadiers poured into the wood and decided to attack the next battalion with the bayonet. 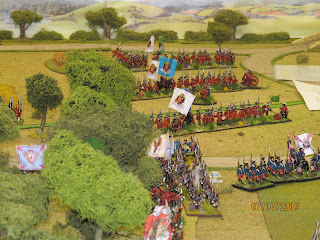 Robbie's Russians swinging round to take the Prussians in the flank, forcing John to spread his troops very thinly to counter the threat here and in the wood. 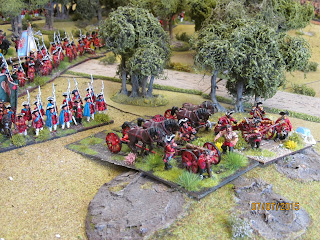 von Browne's artillery caused a fair bit of damage to my infantry as they advanced towards them. I also sent two battalions into the wood to the right of the artillery in order to link up with John's brigade. 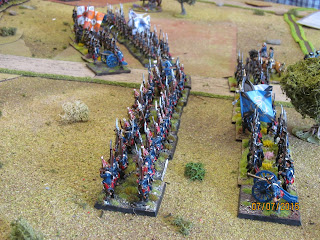 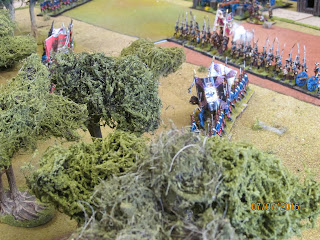 von Goltz's brigade facing a Russian grenadier battalion about to charge their line. In the background the Prussian artillery continued their cannonade of the wood. 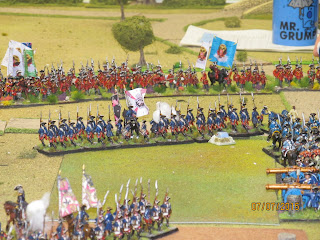 A single Prussian battalion on the right flank was facing three of Russians, but just in shot are the Prussian dragoons which had made the switch from the opposite flank. 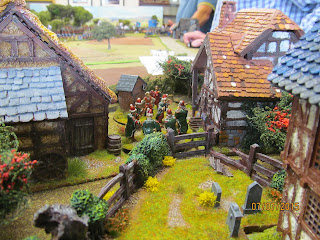 In the beer garden at the back of the pub in Gross Jagersdorff the band rehearse for 'Jazz Night' while a Prussian officer makes use of the 'facilities'. 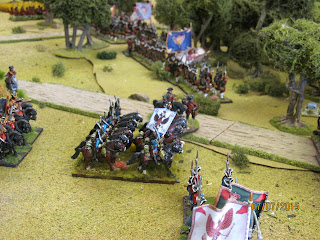 von Browne fed more of his infantry into the wood but his cuirassiers and horse grenadiers were unable to get to grips with the Prussians. 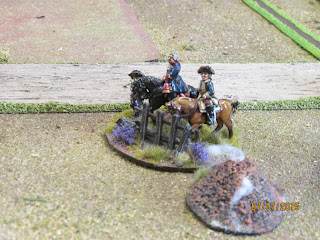 There were several blunders thrown during the game. Von Browne managed one early on which wasn't too catastrophic, but at a key moment of the battle von Dohna threw a blunder and my only reserve, a battalion of garrison troops was forced to retreat for two moves at just the wrong time. The next turn the CinC blundered resulting in a Prussian battalion (IR28) charging the Russian grenadiers in the wood! 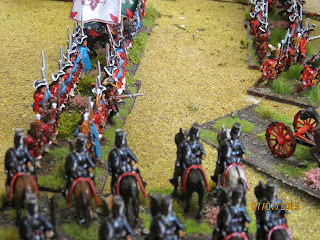 The von Reusch hussars charged the exposed flank of a Russian battalion but it took several moves of melee before they were able to break them, thanks to some excellent saves from Paul and some rubbish throws from yours truly! The melee probably went on too long but it had the desired effect of pinning the Russian right and enabled me to destroy both of their guns on the hill. After finally breaking their enemy the hussars charged into a supporting unit, forcing it back shaken, before retiring to lick their wounds and regroup. 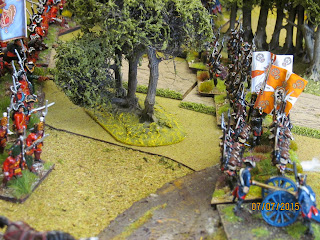 Prussians and Russians close in the wood on the right flank. 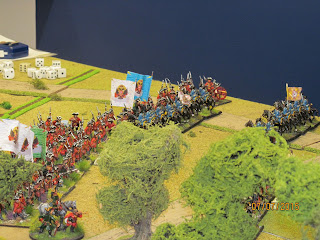 The von Norman dragoons charged a battalion of Russian infantry. The infantry were shaken but so too were the dragoons who had to retire. Another squadron of Dragoons charged the adjacent battalion and yet another hit the battalion behind. The Russians held (albeit disordered and shaken) but as a result Robbie's entire command had become spent as over half of the units were by now broken or shaken. All but one of the Prussian dragoon squadrons were also shaken and until they were able to recover would take no more part in the battle. 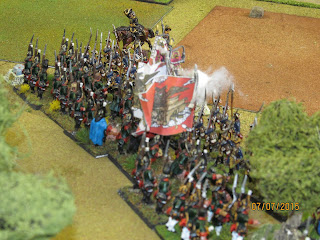 At the same time as the cavalry combat was playing out, Russian grenadiers erupted from the wood and smashed into the Prussian line, eventually destroying the battalion in front of them. They were unable to exploit this success due to the rather fragile state of the rest of their brigade. By now John's hard fighting grenadiers had battled its way into the woods but despite pushing back some Russians, numbers and artillery hitting them in the flank stopped them in their tracks and they were forced to retreat a spent force. 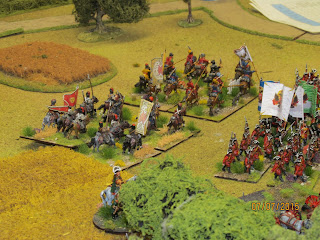 Cossacks from the right flank, after much milling around in the rear, were, with the promise of plunder no doubt, moved round the rear of the Russian left flank to try and fill the gap created by the shattered Russian brigade and to ostensibly threaten the Prussian right wing. Mmmmm? 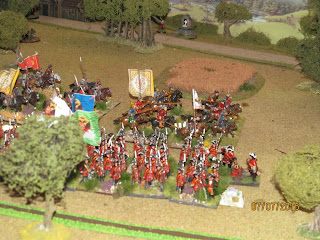 Another view of the retreating Russian left and the Cossacks in the background. 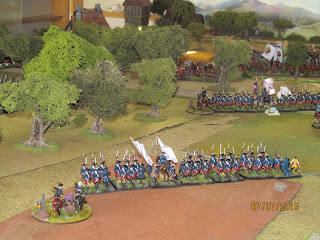 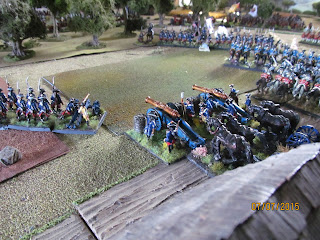 The Prussian artillery. Well, they made lots of noise and did cause quite a bit of damage and disorder to the Russians hiding in the woods.

At the end of an exhausting day (for the players) we did a final reckoning. On the Russian side Fermor's brigade was shaken and out of the battle. Several of Lupochkin's battalions were broken or shaken and von Browne's brigade had taken a pasting, losing the artillery and two battalions at least. As for the Prussians, the cavalry were on the brink of becoming shaken but the dragoons rallied in time to prevent this when the hussars were forced back after their victorious charge, albeit one that ended in them becoming shaken. Von Dohna's brigade on the left had fought their way over the guns and despatched lots of Russians yet were relatively (or is that miraculously) unscathed. John's von Goltz brigade had taken the brunt of the responsibility for driving the Russians back and had suffered accordingly and was shattered but they did well nevertheless. There were several blunders thrown during the game, mainly Prussians but thankfully all bar one of these were not too catastrophic. Even Lehweld the CinC managed one! The victory conditions were for the Prussians to shaken or destroy more Russians than they lost. I think it was actually pretty much evenly balanced so the battle was declared to be a bloody draw, which is the historical end result too. However, from a strategic point of view the Russians were sufficiently discouraged from continuing their march on Berlin and would turn back. Apraxin would be relieved of his command and replaced by Fermor, and the next time these two armies meet will be with him in command at Zorndorf.

The game played really well. Black Powder are like Marmite, love 'em or hate 'em, but do produce a good and very tense game, especially when you use some of the amendments in the Last Argument of Kings book and apply one's understanding of the Seven Years War when playing the game. The Prussian infantry, especially the Grenadiers were exceptionally tough, the line were still at this time still a seasoned force, and even the garrison battalions performed ok. Prussians cavalry outnumbered the Russians on the table and were much better as is only (and historically) right. The advantages of superior drill and firepower makes the Prussians a force to be reckoned with (but they can still become disorder, shaken etc almost as well as anyone else). The Russians were also tough and they had the benefit of being able to re-roll one failed break test per unit in the game. This saved them from the proverbial early bath on more than one (but not every, eh Robbie?) occasion.

Thanks to all for coming. I hope everyone enjoyed the game. I know Paul is not a massive fan of BP but as far as I am concerned if everyone had an enjoyable day then I am more than happy. Tidying up is always a bummer though!

Next time, the biggie will be Rossbach, the French being from Robbie's collection, although I need to fit in the combat at Moys beforehand and let the Austrians feel good about themselves before moving on to Leuthen in a month or so's time.
By Colin Ashton - July 09, 2015