My neighbour Peter came down on Saturday evening for a game. The next large battle in my chronological sequence of SYW refights is Gross Jagersdorf, which we're playing this coming Tuesday. Thankfully this little action was fought after the Prussian defeat of Kolin and seemed an ideal scenario for a Saturday night game with (too much, in my case) splendid wine. The excellent Kronoskaf website has the following to say about the prelude to the engagement.

"After being defeated at Kolin in June 1757, Frederick II had no choice but to raise the siege of Prague and to retreat northward to the Saxon border.
Prince Charles and Daun seized this opportunity to send a large detachment of light troops (about 4,000 men) under Jahnus towards Silesia and the Prussian fortress of Schweidnitz (today Świdnica). However, a small Prussian force under Kreytzen protected the mountain passes giving access to Schweidnitz.
In front of the larger Austrian force, Kreytzen decided to abandon the town of Landshut (today Kamienna Gora) commanding these mountain passes. On July 10, the Austrians immediately occupied the town and used it as a base to launch raids into Silesia.
By early August, Kreytzen had gradually forced the Austrian raiding parties to retire to Landshut. However, Schlabrendorff, the Prussian governor of Silesia did not consider these results as satisfactory and ordered Kreytzen to oust the Austrian detachment from Landshut.
Consequently, on August 12, Kreytzen concentrated all his troops (about 3,000 men) and marched to Hartmannsdorf." 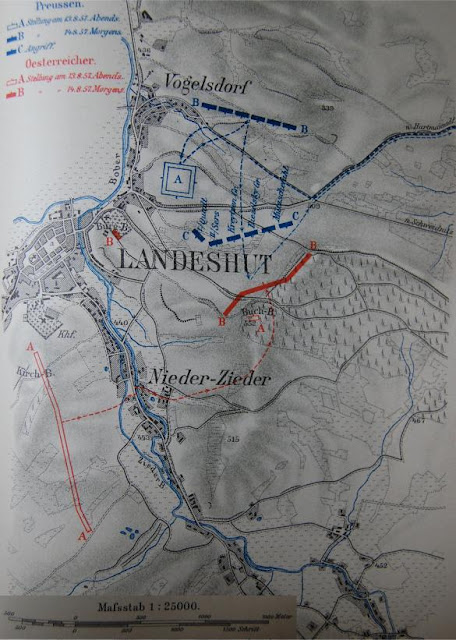 The Prussian's aim was to drive the Austrians from Landshut. Their advance was very slow and they spent a sleepless night in square north of the town being sniped at by Croats. A number of former Saxon soldiers who had been forcibly enlisted in the Prussian army took their chance and deserted. Early the following morning the Prussians withdrew to a position close to Vogelsdorf (marked B---B on the map), deployed into line and advanced on the Croats who had occupied the woods on the Buch Berg. They'd also positioned batteries of artillery on the Burg Berg and Buch Berg. It was going to be another tough one for the Prussians as they were outnumbered and had no cavalry or light troops of any kind, nor any artillery except for their battalion guns. The Garrison btns and the Saxon grenadiers were definitely 2nd rate compared to the other two battalions in the force. This was where we started the wargame. Peter elected to take the Prussians.

Each side also had a subordinate commander rated 8. In reality there were no Austrian Jager at the battle but as I'd just finished them I decided that was reason enough. I had to press some Russian Pandours and Prussian von Kleist Green Croats into Austrian service for the game as I'd been unable to complete the remaining 3 units on my painting desk. 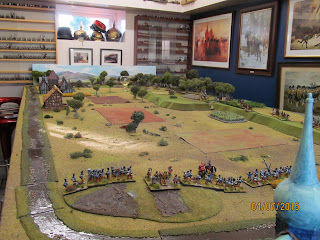 The battlefield from Landshut. Croats deployed in front of the town and on the wooded heights on the right. The Prussians can just about be made out behind the wine glass! 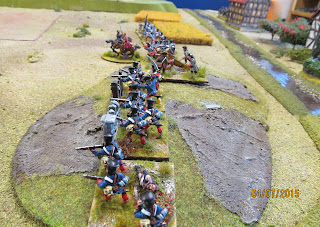 Croats on the Burg Berg with a battery of guns. 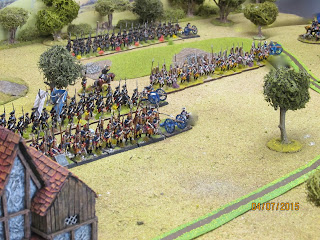 The Prussian advance. They made very slow going of it to start and soon the nice ordered lines had fragmented. The Saxon grenadier btn became disordered and was left behind in the advance. 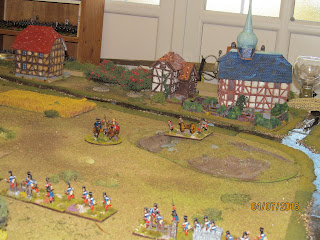 The Croats advance from Landshut. 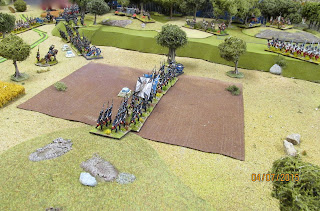 One of the Prussian Garrison battalions advanced well ahead of the main body. Behind them can be seen three Prussian battalions moving on the Austrians in the woods. They drove the Jager off but two battalions were hopelessly slowed down moving through the wooded terrain. 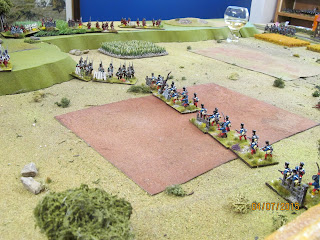 The Austrians concentrated their fire on the garrison battalion pictured in the earlier photo. Just out of shot was a 6pdr battery. Between them they forced a break test on the unlucky and isolated Prussians who promptly fled. 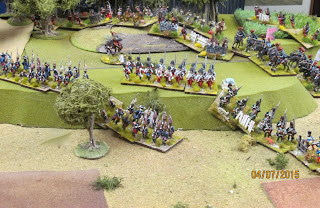 The Prussians unwisely continued to throw their remaining troops into the woods in an effort to drive off the Croats who Peter knew wouldn't stand against a bayonet charge. The grenadier companies however did stand and were destroyed after a brief fight. Lurking behind can be seen two squadrons of Austrian hussars. 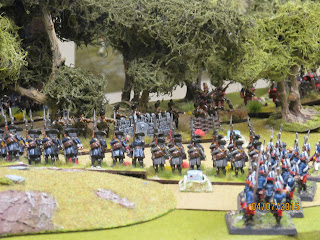 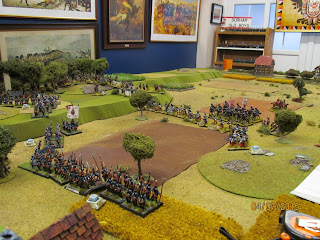 The view from Vogelsdorf. The Saxon grenadier battalion finally getting into action. Not for long though as their casualties mounted and were forced to withdraw, very fast. 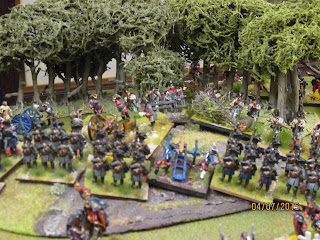 The Prussians overrun the Austrian artillery and drive off the Croats and Jager (the latter permanently) before being hit in the rear by my hussars. 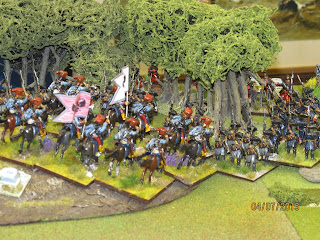 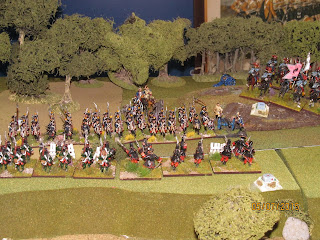 The last Garrison battalion made it through the woods only to face the Croats who had swung round to face them after seeing off the Saxon grenadiers. 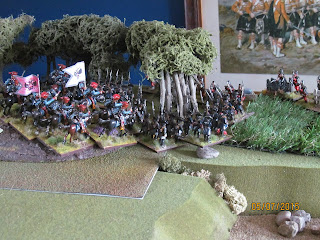 The Prussians turned their rear rank about and held off the hussars but it was the end for von Kraytzen who ordered a retreat. 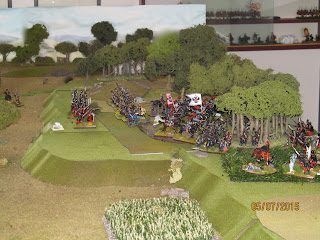 The furious combat in the woods. 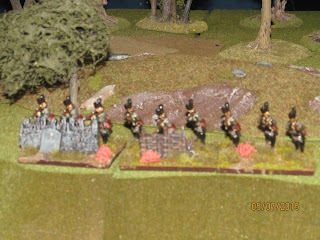 My new Jager before they ran away! 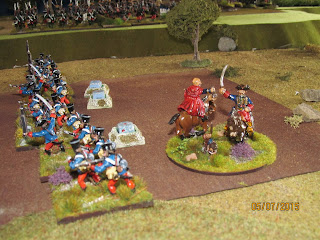 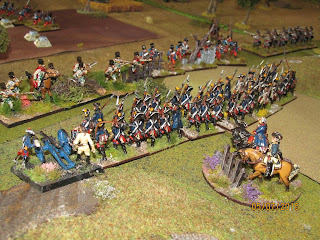 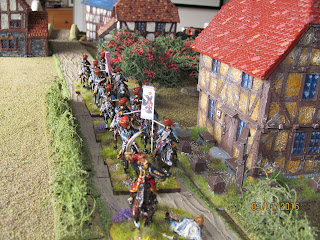 Victorious Austrian hussars clattering through the streets of Landshut after the battle.

Well, the game played out very much as in the real battle but it can't have been much fun for Peter who was severely trounced. He had worked out that the best way of dealing with the Croats was to physically drive them off with the threat of cold steel, but half his troops got caught up in the woods and were wasted. He should have kept everyone together and not got drawn into a position where his battalions were split up and picked off one by one. At one point the unsupported Saxon grenadier battalion was facing FIVE units of Croats! Anyway, hindsight is a wonderful thing and perhaps we shall refight the game, changing sides next time.

Tomorrow Robbie, John and Paul Stevenson are coming up to refight Gross Jagersdorf, in a re-engineered version of the game John and I played last year.
By Colin Ashton - July 06, 2015