Everyone seems to be refighting Mollwitz so here's my version

Another game this week, this time Mollwitz which took place at the outbreak of the War of the Austrian Succession in 1741. Everyone seems to be refighting this battle at the moment, well Charles S Grant and Jim Purkey are to name but two. As I have just finished my winter terrain mat I thought that this would be an ideal scenario with which to christen it. 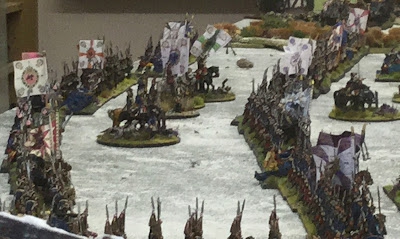 My longest serving war-games opponent Paul T will join regulars Robbie and John R for the game. Infantry units are 36 figures strong, cavalry are in 12's.

*All line and the Guard battalions have battalion guns.
** After the third and every time after a Prussian unit is broken, or when the first brigade becomes spent,  Frederick must roll a Command test. -1 for each broken unit. If he fails he must leave the field and Schwerin takes over.

There is a view held by many that the Austrian infantry battalions did NOT have their battalions guns with them. In the battle the Austrian artillery was slow in coming up so Neipperg will have to dice each move to see if and when they arrive. Also, the Austrian infantry were apparently quite raw, so if they occupy any villages they must pass a command roll with a minus 1 modifier if they wish to leave.

That's it for now. The game will be fought tomorrow and the after action report will appear asap afterwards.