This week I am hoping to refight Leignitz using Honours of War.  http://honoursofwar.com 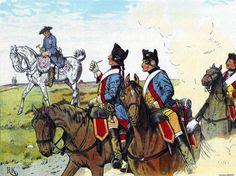 Throughout August 1760 Frederick was manoeuvring  between much larger Austrian and Russian armies which were attempting to encircle his army. Frederick managed to slip out of the trap but was unable to link up with Prince Henry’s army in Silesia as he had planned. He faced the combined army of FML Loudon and FM Daun.  There was also a fair chance that a Russian force of 25,000 under General Chernyshev would soon join the Austrians near Breslau. 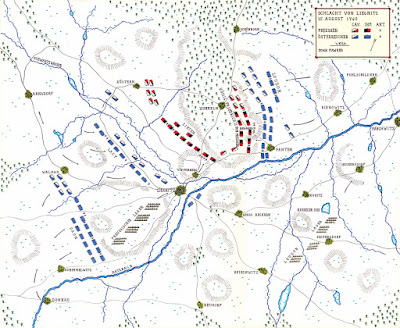 Frederick’s army was near the village of Leignitz on August 15th when he was attacked by the Austrians. Daun's plan was to launch his entire force at Frederick in order to destroy the  Prussian army. FML Loudon was sent with 25,000 troops to act as the anvil to keep the Prussians in place while the main Austrian force, the hammer, under Daun crushed them. Luckily for Frederick he had abandoned his camp and moved his forces further to the East out of the trap. He left von Zieten behind to block Daun, who would be faced with the unpleasant task of crossing some pretty bad terrain in order to attack him. Meanwhile Frederick moved 30,000 men to a plateau near Panten on the Katzbach and attacked an unwary and surprised Loudon. Louden reacted quickly to this threat by launching his combined grenadier battalions at Frederick's centre. but they were driven back with heavy casualties, mainly from the fire of over 30 Prussian 12pdrs! Frederick followed this up with a combined cavalry and infantry attack on his left wing and pushed the Austrians off the plateau. Louden established a new defence near the village of Bienowitz. However, after two hours the battle was over and Louden driven off. His rapid defeat meant that there wasn't enough time for any intervention or reinforcements by the mainAustrian army. However, when Daun finally got his act together and advanced Frederick was gone and Louden's force was in no state to continue. Daun chose not to continue with a new attack and consequently completely missed his chance to destroy Frederick with his superior forces.

It'll be an interesting one to set up and will present several challenges. 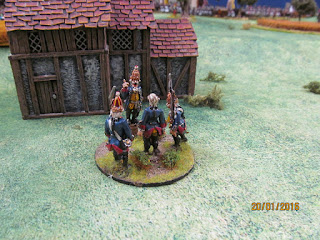