After a great weekend in York where I seem to have spent more than I planned  (just paint, brushes, MDF, a rulebook, and some dice)but did meet lots of old and less old friends and acquaintances (We have a deal; I go to the wargames show and Katherine makes use of the hotel spa/salon) I have another game planned this week. Robbie, John, Dave Jarvis and Mark Dudley will be playing. It will be Seven Years War, and we shall be using Honours of War again. Apart from that I am still very undecided as to which battle to recreate. The next 'big' battle chronologically after Kunersdorf (which was the last battle we played in our odyssey through the SYW) is Leignitz, which would be an interesting challenge no doubt. Or I could hop back in time and do Breslau which I had originally skipped as I reckoned it wouldn't have worked using Black Powder, but should do with HoW. Or do I refight another game previously played with BP, but using HoW? Rossbach or Leuthen spring to mind. Whatever the choice I will be keeping the guys in the dark until they arrive, and I need to crack on and finish some Prussian artillery as I am replacing some of my older and battered existing guns and crews with Black Hussar figures and Westfalia cannon.

The other big question is what kind of soup shall I make? 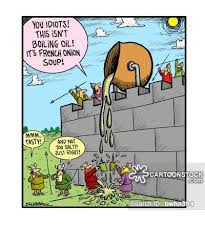