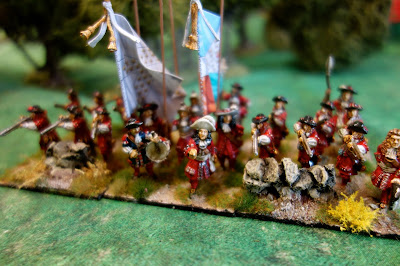 I finished a new unit of French infantry for my 1672 collection this weekend and I'm quite pleased with the way its turned out. At the start of Louis XIV's reign I understand that the Royal Roussillon regiment wore a uniform of red coats and breaches, lined red, with red ribbons! After years of British for the AWI and Crimea and Russians for the SYW I have to say that I truly hate painting red uniforms, but I was determined to have this unit in my French army, if only because I had the flags. The figures are Copplestone/North Star Glory of the Sun with a couple of Front Rank officers thrown in. 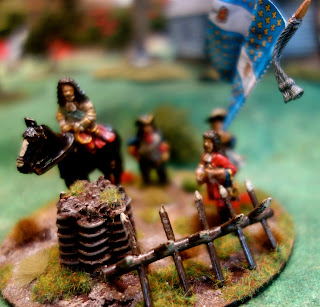 The next piece is a command stand, supposedly depicting Louis XIV's brother Philippe, Duc D'Orleans. The mounted figure representing the Prince is a Reiver Castings model of Marshall Turenne but I thought the dress 3/4 armour more suited to the more flamboyant personality of the allegedly gay and transvestite Philippe. The figure on foot with the telescope is a Wargames Illustrated model of John Churchill, so it is not out of place as he fought alongside the French in this war under the command of the Duke of Monmouth. 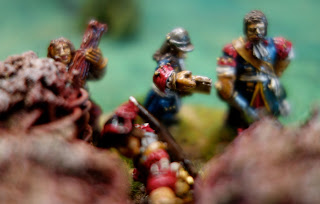 Next, not quite new but I don't care. This is the North Star d'Artagnan figure inspecting the trenches at some siege possibly just before he get hit by a cannon ball and met his maker. Well it wouldn't be after! The other figures are Dixons. 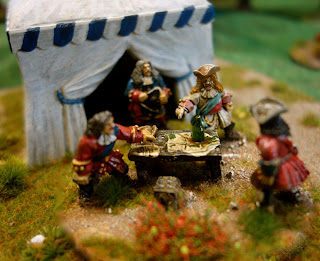 Finally, a command group of Foundry generals planning something nefarious no doubt outside a Grand Manner pavilion.

I am hoping to have a game this Thursday with Robbie and John. It'll probably by the next and possibly last (for the moment at least) engagement in my fictional ACW campaign.