A new project: Suvarovs Russians v the French in Switzerland

I've long been drawn to war gaming  the French Revolutionary Wars, far more so than to the traditional Napoleonic era, but have until now resisted. I recently re-read my dusty old copy of Duffy's Eagle over the Alps and that was it. Over the past few months I've been planning what I would need/like for each army and where to get them. That done I wondered where on earth I'd get the cash for such relatively large project, but that's another story best left off the pages of this blog in case Mrs Carry on up the Dale reads it!

In the end I just couldn't make my mind up so I ended up buying a fair few figures from Eureka (by far the best and if you can stump up AUS$300 you get free shipping or a 20% discount which goes a long way to offsetting the cost of the figures and the likely outrageous customs charge). A also acquired some Trent Miniatures which are rather lovely, and a regiment of cavalry off Elite Miniatures.

Here is my first completed regiment, namely two battalions of the Smolensk Regiment. I thought the combination of green coats, straw yellow pants and waistcoats and puce facing was particularly repellent but they don't look too bad; in fact I am quite pleased with them as I completed them from start to finish in exactly one week. 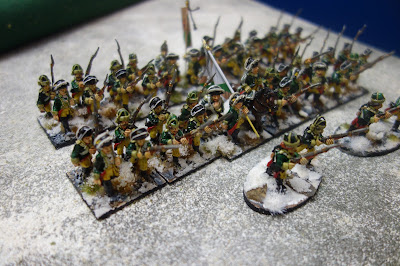 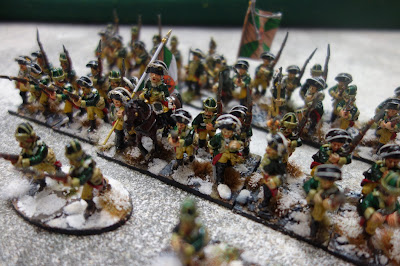