Robbie and John paid another visit this week to fight what might well have been (but wasn't) the final battle of my mini ACW campaign. The Union army under John had pushed south and were strung out  with their lead elements holding a position near the town of Crawleyside. The entire Confederate Army of the Apeninnes launched themselves at the Union troops in a do or die attempt to drive the Grand Army of the Northumberland out of the valley. Robbie's Confederate persona was deemed sufficiently recovered to resume command. John commanded the Union army, ably aided by myself.

The forces were quite well matched (theoretically) as the Confederates had three strong brigades of veteran infantry against the Unions four brigades of which two were classed as 'Green' or otherwise generally useless, while the other two were rated veterans. There was almost parity in artillery although the Union cavalry fielded two weak regiments to one Confederate one. 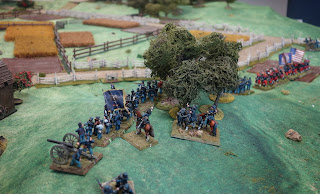 The start of the battle (which was to last 14 moves before night fell) saw one Union brigade deployed on Polly's Hill (above) and another in reserve to their rear. Neither were allowed to move in turn 1, and the brigade on the hill wasn't allowed to move until turn 3. The Confederates' first brigade entered the game in turn 1 in the centre of their baseline. The remainder would arrive along the road towards the far end of the table, just out of shot in the picture above. The Confederates had to capture either Polly's Hill or the line of walls on Sandy Ridge, and of course get the better of the Union army. The Union objectives were to hold both the named objectives and defeat the Rebs! No small order then! 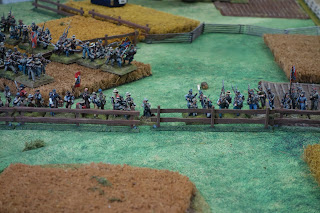 The leading Confederate brigade quickly marched across the table and took up positions along a fence line in the centre. 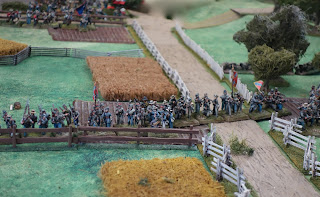 The remainder of the Confederate forces start arriving (in the back ground) while Robbie extended his line to the left. 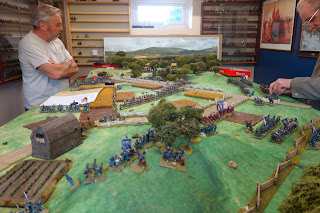 Robbie being thoughtful as John deploys is veteran reinforcements right where they would be the most useful in foiling Robbie's plans.

The Confederate centre as seen from Polly's Hill. 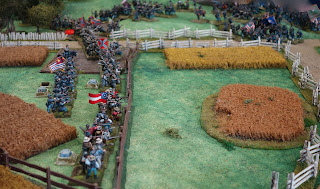 In the centre the Union reinforcements are soon exchanging shots with the Rebs in the centre. 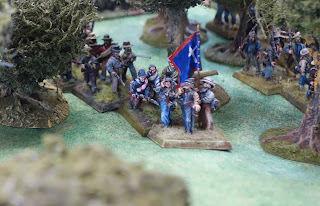 One brigade of Confederates made straight for Sandy Ridge and tried to turn the Union flank. Robbie threw a blunder so the troops above went a bit further  than was planned! 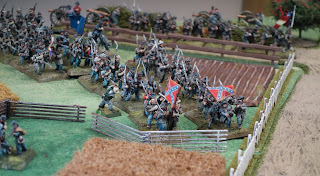 Yet more Confederates and their artillery arrive. 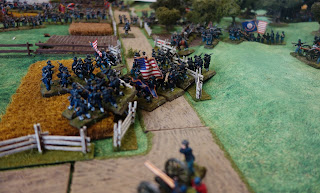 John pushed forwards in the centre. 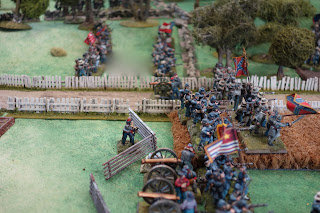 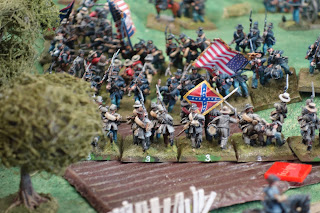 A furious melee began in the centre. 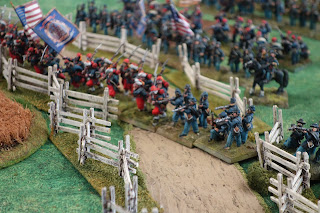 The Union brigade on Polly's Hill finally advanced to the road. 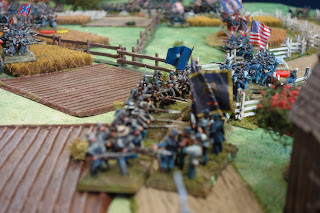 The Texans charged home against the green Union troops, who's closing fire was completely ineffective..... 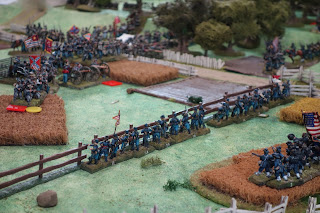 In the centre the Confederates had pulled back and a hole appeared in the union line when one of Johns regiments broke. The Union cavalry was rushed forward to plug the gap, where they took heavy casualties and were eventually forced back. 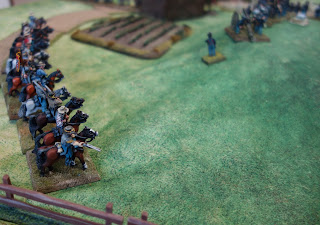 Robbie chanced his sole unit of cavalry, who drove off a green battalion of Union troops and then found themselves on the flank of the Union brigade holding Polly's Hill. 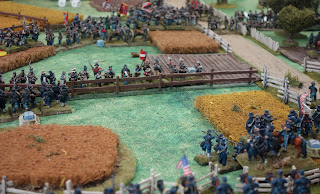 The Confederates in the centre consolidating their position (i.e. plugging a few holes where units had been driven back 'whipped') 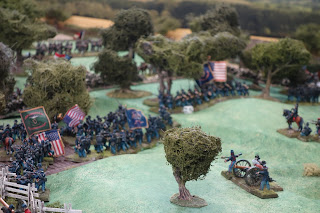 The Union 'Irish' brigade advancing through the woods on Sandy Ridge having seen off the Confederate attack. The Confederates are now lining the wall attempting to rally. 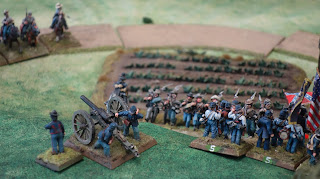 The far left of the Union line. The artillery shells Robbie's cavalry and a battalion of Texans storms up the hill to try and drive off yet another green regiment of boys in blue. My other brigade had started to advance to fill the gap in the front but when I threw a blunder withdrew two moves taking some of it off the table! 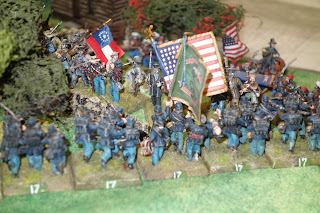 On the opposite flank the Irish close with the remains of Robbie's brigade holding the wall in the woods. 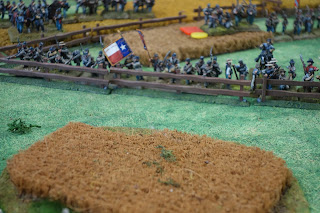 The Confederates in the centre pour a withering fire on the Union troops to their front. 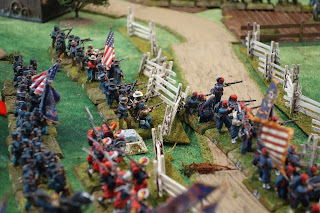 With the exception of the Zouave regiment all of the Union troops on this flank are green untested generally pretty poor. 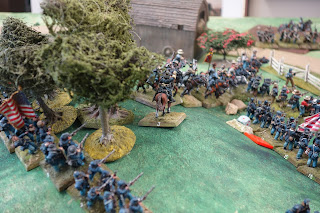 My reserve brigade finally gets (almost) into action. Robbie's cavalry managed to hit another of my green units in the rear! 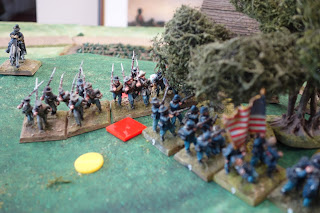 Newly arrived and just in time to be charged in the flank by the victorious Texans who had broken the regiment facing them in the previous turn. 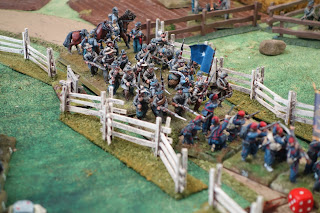 Robbie's Texans charged down the road into the flank of one of my unreliable green regiments. They actually held for a turn before breaking. It was at roughly this time that the Union C-in-C copped a stray bullet from a Reb sniper and was killed on the spot. 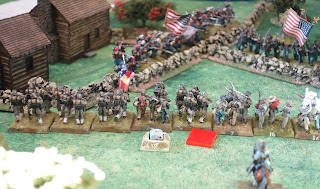 The position on the Confederate left was looking a bit sticky as the Union Irish brigade surged forward, driving all before them. 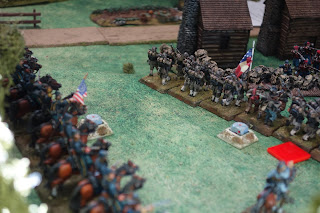 To add insult to injury, John's remaining cavalry unit managed to ride around the Confederate flank and appear in their rear! 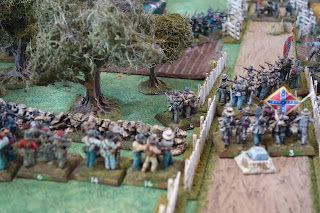 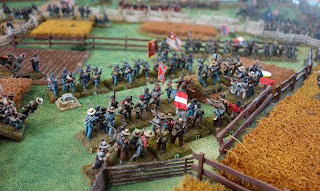 With the Union troops on the Confederate right disposed of (both brigades were broken) Robbie switched his troops to reinforce his centre. 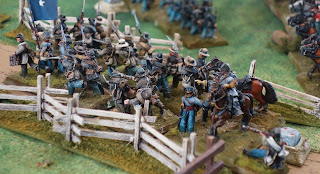 The Confederate C-in-C urging the Texans on. 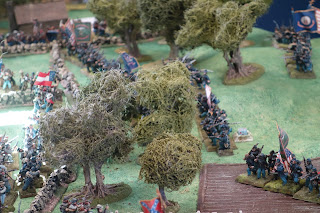 It was at this point that I called time as we had reached the end of turn 14. The Confederates certainly had the best of the battle and none of their brigades were out of action. The Union army on the other hand had lost five regiments broken, two entire brigades had been shattered and their C-in-C was dead. It was a fiercely fought battle played at a quick pace as we managed the 14 turns in a little under 4 hours (excluding lunch). Robbie's aggressive tactics worked well and the dice rolled badly for the Union, and my ineptitude at getting my entire command whipped or broken didn't really help. Technically the battle was indecisive but as the Confederates had captured Polly's Hill a minor victory seemed an appropriate result. However, the campaign will go on as we have yet to have a decisive victory by either side that would decide who would hold the Durham Valley.

PS: ACW buffs among the readership may well recognise this battle, which I have (loosely) based on Kernstown fought during the Shenandoah Valley campaign.
By Colin Ashton - August 08, 2016