As reported in my post yesterday, Conrad came up on Wednesday for another game, this time set during the French-Dutch War between 1672-78. I set up a fictional scenario located near the city of Cassel which is 30km or so south of Dunkirk. There was an actual battle near Cassel during this war, in 1677, which was a decisive if not crushing French victory under the command of Philippe, Duc d'Orleans, Louis XIV's younger and somewhat 'unconventional' brother. 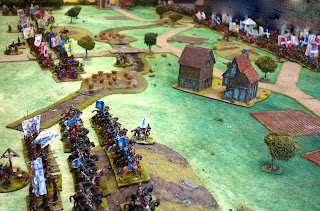 The objectives of the game were to capture and hold a key supply route, road junction, two bridges and a town. if the French were successful their operations around the city of Cassel would continue but if they failed then they would be forced to give them up and withdraw.

Conrad took the French while I had command of the Dutch/Allied forces and the kettle. Both sides were fairly evenly matched numbers wise. The Dutch had 16 battalions of infantry (including 2 Dutch foot guards, 5 Spanish foot, 1 of Scots and 2 from Luneberg/Celle), 1 of dismounted Spanish dragoons, 12 regiments of horse and one of dragoons. They were supported by half a dozen guns of various calibres, mainly light. The French army had 16 battalions of infantry (including Gardes Francais and Gardes Suisse, 2 Swiss and 1 German regiments and a regiment of Scots), 2 regiments each of mounted and dismounted dragoons, 5 regiments of Maison du Roi and 5 regiments of horse including the Cuirassiers du Roi. Again, the army was accompanied by a mixture of 4 light and 2 heavy guns. Now, I know that the English withdrew from the war before the date of this fictional battle, but they were too nice to leave out for purely historical reasons! 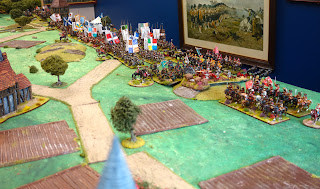 The French army stretching out into the distance; their left wing is rather weak.

The Dutch rift by comparison contains the Lifeguard and Horseguard regiments, the Guard dragoons and both battalions of the footguards. 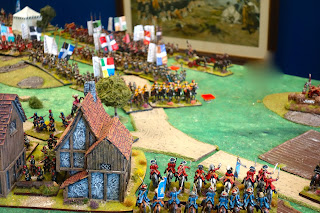 The battle developed quickly with a charge by the Horseguards that drove back the French horse and dragoons in fairly short order. The French dragoons in the village were a nuisance as they caused a few casualties and disorder on my elite horse. 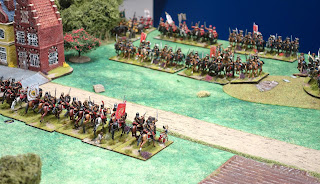 On the left the Imperial cuirassiers advanced against the Maison du Roi but failed to reach them in a charge. The latter also failed to charge home in their turn so were hit the next by the cuirassiers. 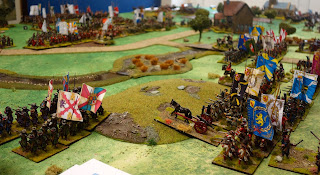 In the centre the Spanish made very slow progress and one brigade of Dutch foot failed to move for several turns. 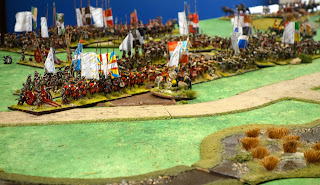 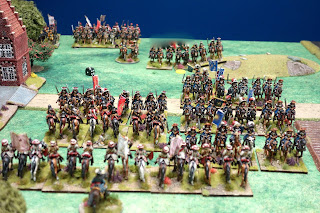 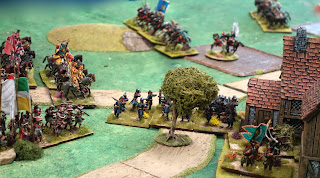 Back on the Dutch right the French were crumbling under the pressure. Their horse were all broken, the battery on the hill had been overrun and the dragoons were about to be charged by the Dutch horseguards. 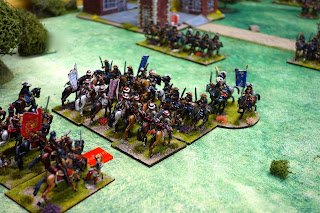 While on the Dutch left, the French horse were doing the same as the entire Dutch left wing was shaken or broken. 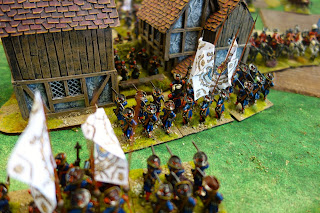 After a pedestrian start the Dutch footguards finally got moving and assaulted the village held by French dragoons. They failed to break in but as a result of the required break test the battalion turned tail and ran away in panic. Very unguard-like. 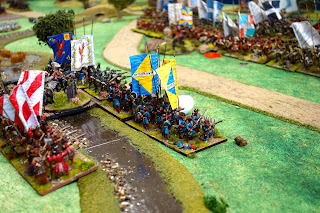 In the centre the two brigades of Dutch foot crossed the stream to engage the French. 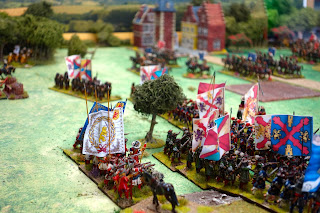 While the Spanish turned to cover the exposed left flank and began to cause enough casualties on the French horse to make them pull back. I might have chanced it and charged had I been in command of the French....maybe. 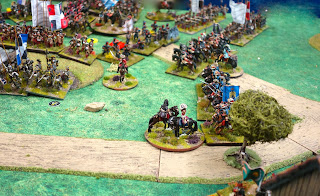 In the centre the Dutch were getting the upper hand in the exchange of musketry and one French battalion broke, followed by another soon afterwards. The French dragoons were in full retreat and Conrad just managed to form a line to stop me rolling up his flank. (below) 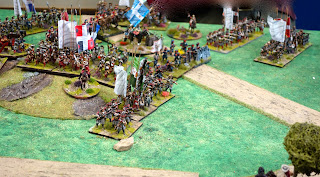 The French are in a very exposed position with their exposed battalions under fire from infantry and artillery and threatened by my horse. 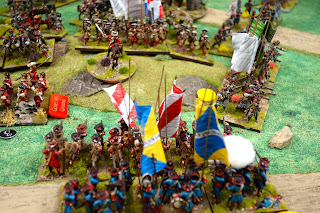 A nice gap had opened up in the end of the disordered and shaken French line. 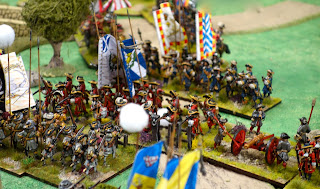 At the other end of the line the Dutch Pallandt regiment charged the Scots in French service and due to the latter's previous casualties broke them. The gun was also swept away. 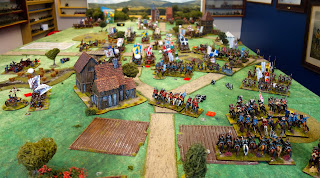 A view down the battlefield showing the Dutch horse swinging round having disposed of the French left. 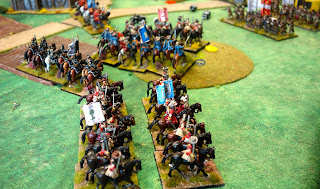 The French regiment seen in the top right was charged by the Dutch Lifeguards. Conrad threw some dreadful dice and they failed to stop me with closing fire and in the melee after more awful dice from Conrad and some good saves from me, were forced to retreat. The battered Lifeguards then retired to regroup. 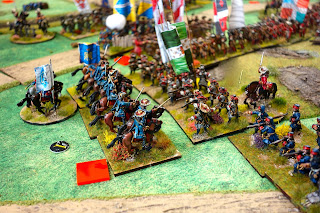 This allowed the Horseguards to charge the next already disordered and shaken French regiment. They too met a similar fate as the previous unit and were broken. The Dutch followed up into the flank of the next French regiment and broke it too. 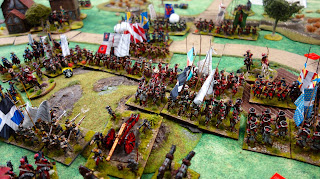 The French line was now in some disarray as units were falling back all over the place. 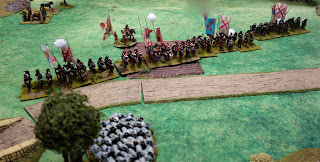 One Spanish regiment broke following an exchange of musketry with the Gardes Suise but the other four regiments advanced and pinned the timid French Maison du Roi into the corner of the field. 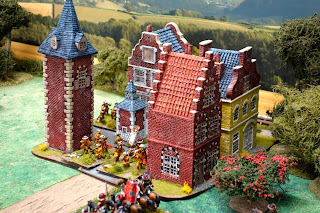 Spanish dismounted dragoons had also finally occupied the town and were taking pot shots at the French. 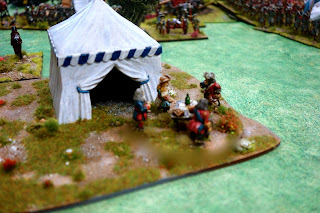 The French commanders have a meeting to decide their next move. 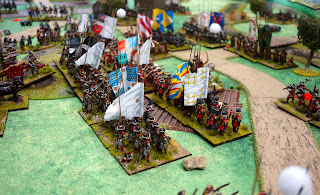 The French centre is still pretty much intact but they were wilting under pressure from the Dutch on their flanks. 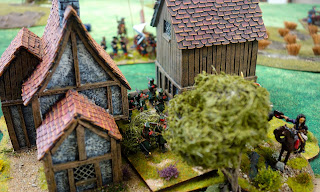 Nasty French dragoons still held the village at the close of play. My other battalion of Dutch footguards were reluctant to try and drive them out.

We called it a day at that point. The Dutch left wing had been destroyed but the French had been unable to capitalise on this and the Dutch (Spanish actually) had stepped up to close the gap. The French left was shattered and the centre was in danger of being rolled up so Conrad conceded defeat. A Dutch victory, albeit not a decisive crushing one, was declared.

It was an excellent game and we both thoroughly enjoyed it.
By Colin Ashton - October 13, 2016