The Battle of Cowpens

On Saturday evening Peter came down the hill for a game. This was great as it meant I could escape the torment that is Saturday night tv and leave my wife to enjoy (?) the X Factor and 'Strictly' in peace.  Peter also brought some wine which was an added (but expected and planned for) bonus.

My AWI collection has not seen the light of day since we had the building work done on the house in 2014, so, wanting a game that would be relatively easy to set up, fun and last for 3 hours or so, or at least until the wine ran out I plumped for Cowpens, where Colonel Banastre Tarleton got his ass well and truly whipped! I used the scenario (sort of) from the Black Powder supplement Rebellion. John and I had fought this battle several years ago (see elsewhere on this blog) and the British had avoided defeat by fighting the Rebels to a bloody draw. How would it go this time? Peter took the British and I had the Rebels/Patriots (delete as applicable). We played down the length of my table on what was a fairly open battlefield. I ignored the usual army break point rule, instead each army would be broken if they lost two-thirds of their units shaken or broken. Peter only had a single command figure, Tarleton, so getting orders through and more importantly, rallying points off were going to be crucial. The flip-side was that with the exception of my Continental dragoons and two battalions of Continental infantry, the other nine units were all militia of varying quality ranging from 'flakey' to absolute 'pants'! 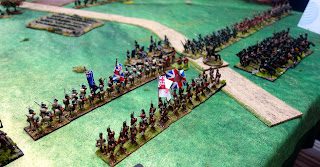 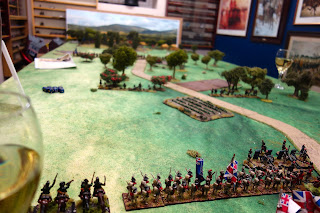 Rebel skirmishers in the scrub/trees supported in the distance by a brigade of Militia. The third line and the cavalry are out of sight at the rear. 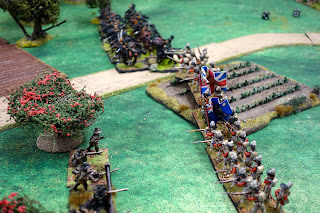 The Legion cavalry charged one group of skirmishers who fled before them. HM 7th Foot (here played by HM 23rd) close with the other skirmisher unit. 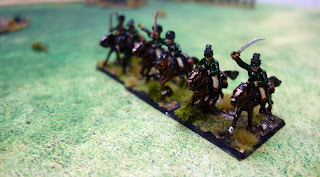 The detached troop of Legion cavalry on the left wing. They achieved little in the game other than becoming shaken by Rebel musketry when they tried to charge. Peter couldn't rally them as he had more pressing matters to deal with. 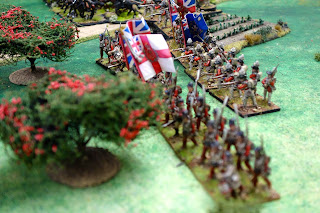 The 7th were disordered by the Rebel skirmishers so the 71st passed through them and charged with the bayonet. My skirmishers evaded (i.e. fled). 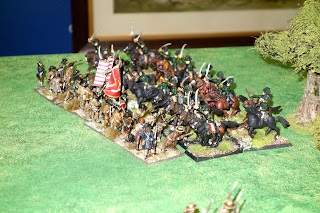 On the other flank Peter charged one of my Militia battalions with the main body of the Legion cavalry. The Militia held and actually drove the Legion off shaken and in disorder. 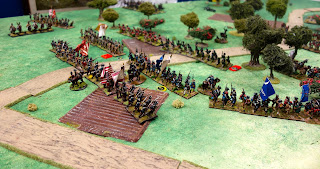 In the centre the Rebel third line has moved up (including two Continental battalions) to support the wavering Militia in the second line, now under pressure from the British Light battalion, the Legion infantry and the 7th and 71st regiments.

The British are in trouble. The 7th failed a break test and fled the field, while the Legion infantry were shaken. Two Rebel Militia battalions had also broken and another was shaken, so the game could go either way at this point. 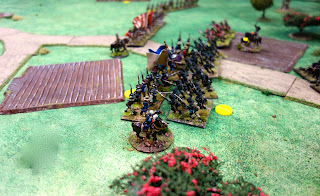 Militia and Legion infantry slug it out in the centre. 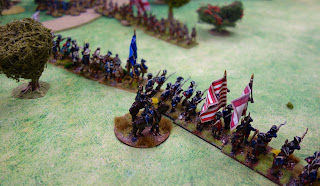 The Continentals are about to outflank the British line.

Militia cavalry slowly make their way towards the fighting. They never got anywhere near the enemy, which is probably a good thing. 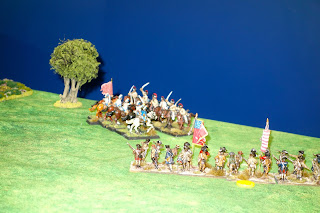 Out on my left, the 17th Light Dragoons had got themselves in a pickle. They'd charged one of my battalions in the rear but failed to break it. They had to withdrawn and were then hit by my Continental dragoons and forced to retreat shaken. 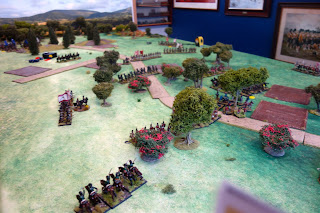 A somewhat emptier battlefield. My Continentals flanking the British but under fire from the guns and the 71st, with the Light battalion the only unshaken units in the British army.

The British centre. In the distance can be seen the Continental dragoons poised to charge the flank of the still shaken Legion cavalry. 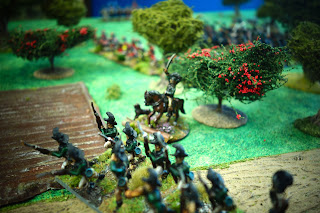 Tarleton rallies a point off the Legion infantry. 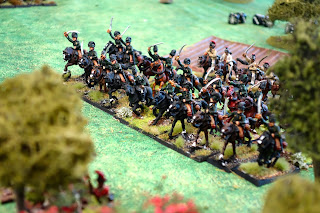 British Legion and the 17th Light Dragoons trying to rally before the Continental dragoons charge them. 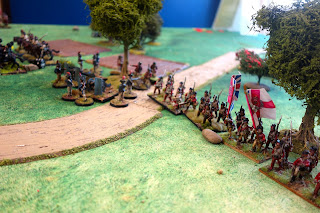 HM 71st and the artillery.

My Continental battalion led by the Rebel commander on the British flank.

At this point not only did the wine run out but a quick roll call revealed that the British had lost (broken or shaken) five out of eight units, while the Rebels had lost seven out of twelve. I declared it a minor Rebel victory as they'd effectively neutralised or destroyed the bulk of the British force while managing to escape annihilation at the wrong end of British bayonets and sabres. Not quite the stunning victory I was hoping for but a victory nevertheless. I think the British have a hard time in this game as with only one commander issuing orders and rallying points off there is only so much they can do before failing a command roll and bringing the turn to an end. This happened to Peter several times. It was fortunate that all his cavalry were classed as marauders and therefore ignored distance when testing, but his infantry line became overextended and fragmented. Of course the Rebels had more commanders but they were, with the exception of the CinC, the cavalry and the third line, all pretty poor. To be honest, I mishandled my skirmishers and allowed my second line to take a battering before my third line could engage, but I got away with it.

A great game and a great period. Man of the match goes to the Continental dragoons.