Peter came down again on Saturday evening for another round of drinking too much very nice wine. While we enjoyed the wine we refought the Battle of Weitzel's Mill. I've not played this battle before so I thought I'd give it a go using the information from the pages of the Rebellion supplement to Black Powder. It was also a good choice for a Saturday evening as the scenario was time limited and the British had to force the river crossings in the face of (possibly) determined resistance from a force of militia bolstered by a few Continentals and Lee's Legion.

Peter took the British once again and marched up the road, deployed into line and traded shots with the Rebel riflemen blocking their way. Meanwhile Tarleton's cavalry and a brigade made up of HM 71st and the Hessian von Bose regiment swept through the woods in an attempt to turn the flank of the riflemen and reach the other road leading to one of the river crossings. The British failed to take advantage of their expertise with the bayonet and instead got the worst of the exchange with the riflemen. In a most gentlemanly act I reminded Peter of his troops' superior melee capabilities, and at once he charged the riflemen's skirmish line with HM 23rd Foot and HM 33rd Foot. He failed to contact as both units of rifleman to his front were able to evade. The third unit was also charged by the Light battalion and it too fell back shaken. 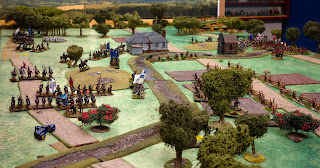 The battlefield at the end of the game. The ford on the left is the one fought over by the 71st and the Hessians. The road down the centre is where the Legion cavalry charged to their destruction, and the ford on the far right is where the 23rd and 33rd can be seen crossing. The British had taken an age to drive the Rebel riflemen down 8 feet of table , some of whom can still be seen in the centre.

Von Bose and HM 71st reached the other road and headed towards the ford. Tarleton's cavalry again tried to get behind my riflemen but couldn't move fast enough. The British continued their advance through a series of bayonet charges finally drove two units of riflemen out of the woods. The third rifle unit was almost destroyed through the combined attention of the Light battalion and the Hessian jager but passed a crucial break test and was able to retreat to cover the central ford.

All this time the main body of the Rebel force had been standing idly by, as I had failed to pass all but one  command roll.  Thankfully the order I did pass saw me able to put some skirmishers and a battalion of militia in position to contest the ford being approached by HM 71st and the Hessians. Peter then ordered his cavalry to head as far down the road and behind the retreating riflemen as they could. He got three moves and rather more then he bargained for as I watched all three squadrons of Legion cavalry race off in column and almost reach the central ford!!!! Oops! This unfortunate turn of events saw the cavalry under fire from the flank and front by almost the entire Rebel army as they rode past. All three squadrons were shaken and the lead one disordered as a result, and I then charged the central squadron in the flank with Lee's Legion, broke them and burst through into the flank of  Peter's recently deployed artillery, overrunning one battery before a lucky shot caused them to take and fail a break test. 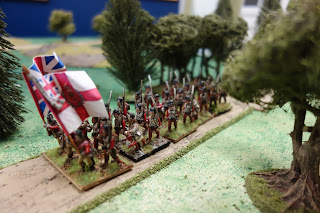 HM 71st marching to their doom at the ford.

Meanwhile the already shot up HM 71st charged across the ford, took more casualties and became shaken and disordered, meaning they bounced and had to retreat and take a break test, which they failed spectacularly and routed! Von Bose's regiment charged in the following turn and made it across the river and into the waiting militiamen and drove them back in disorder. The trouble was that they were now isolated on the wrong side of the river facing a battalion of Continentals, a unit of riflemen and a battalion of militia, so they weren't going anywhere.

Over on the other flank the two British regiments (HM 23rd and 33rd) forced the remaining Rebel riflemen over the ford and were able to cross in their wake before Lee's Legion infantry could react. The 33rd were disordered and pretty shot up but weren't in any immediate danger.

Darkness fell just as the wine ran out. The British had captured two of the fords but were nowhere near able to claim a victory as the Rebels had bought the necessary time and were able to withdraw unmolested by the much battered British. Having lost their cavalry pursuit was out of the question, so  an unexpected Rebel victory. Peter realised that he should have been more aggressive from the start in order to drive off my riflemen and get to the river much sooner than he did. Never mind. Next time we punctuate a Saturday night wine-tasting with a war-game we shall be doing Guilford Courthouse, and if he's not aggressive enough it'll end badly for the British.

Just a couple of photos as my camera was on charge upstairs and I forgot to get it until almost the end of the game. 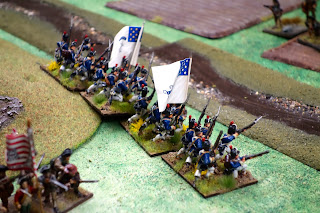 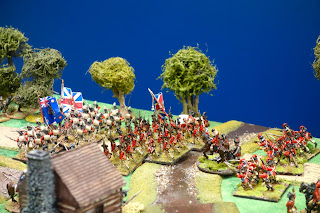 The 23rd, 33rd and Light infantry crossing the right hand ford at the end of the game. 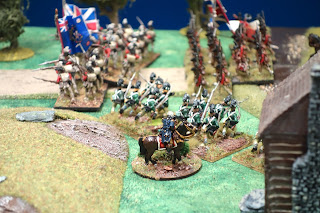 And waiting for them, the infantry of Lee's Legion ready to take them in the flank. 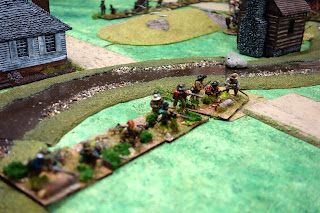 One of the Rebel riflemen units that had withdrawn the length of the table. 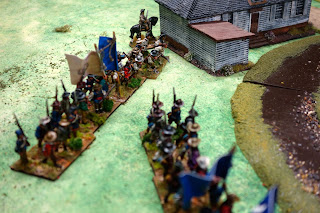 Militia waiting safely behind the river. They were classed as wavering and unreliable and therefore not very good. Thankfully they weren't put to the test and had to amuse themselves by shooting up the Legion cavalry.