A quiet week, but a productive one.

It's been a while since I had a game, well for me at any rate, over two weeks! Of course, a visit to Prague last week was the main reason why, and a great trip it was too. Glorious sunshine, no wind, not a cloud in the sky and an almost tropical 5 degrees C during the day. Spent much of the time trundling over the cobbles between cafes, sampling the beer and quite excellent food, museums, a bit of culture listening to concerts, one in an amazing church, and seeing the usual sights of the city. I was very tempted when I saw a Frederick the Great v Maria Theresa chess set in a shop but it was overpriced  and I've since seen it on line for a fraction of the price. It would make a nice birthday present. Hint.

I have a game on a Friday evening with Peter and hopefully a game next week during the day either atuesday or Thursday. Paul has sorted out the three remaining battles of the War of the Austrian Succession to play using his 15mm collection and Honours of War. Fontenoy, Rocoux and Laufeldt.

Meanwhile, I've started to base up the latest additions to my Austrian and Russian armies for the French Revolutionary Wars.  Sorry about the photo quality but I had to use my iPad as my camera has disappeared somewhere. It'll turn up. I couldn't wait to show these figures off hence the incomplete bases but I am very happy with them. They're all Eureka Miniatures. The Hussars and Dragoons don't yet appear on their webstore (indeed there are lots of codes that need adding, such as the Russians in greatcoats and Austrian Grenz, but you can still ask for a list and Nic will happily supply them). I shall be sending him a Salute pre-order so I don't get hammered with postage and customs charges. Take that, HMRC! I was lucky enough to pick up several volumes of A.V. Viskovatov's works on the Russian army of the Napoleonic Wars, focussing on the uniforms at the time of Czar Paul I so plenty of information there to help build my Russian army.

The battalion will actually end up being the Regiment Noble a Pied de Conde, a unit of the Conde's Emigre army that IIRC fought with the Russians and others before being disbanded at the end of the War of the 2nd Coalition. I've got to paint a flag for them yet but I have the info thankfully. 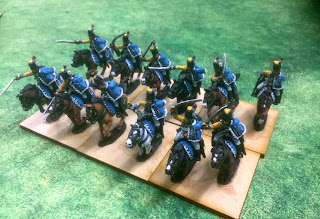 This pic is of Russian Hussars. Gorgeous figures. What more is there to say? 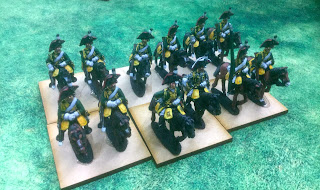 Russian dragoons. Again lovely figures. In this case they are animated really well full of inaction. 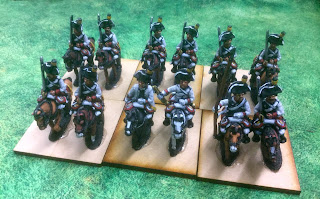 Lastly, a regiment if Austrian cuirassier, although I might redo the plume to make them Russian, as there's little real difference. (well  there is for the purist but in this scale...?)

So there, I hope to get these units based up by the weekend so they can take part in the game on Friday evening. If not, it doesn't matter. I might also manager to finish the bases on five more battalions of Austrians plus their battalion guns but I somehow doubt it. I have my painting and gaming mojo back at 100% but while the mind is willing the body isn't terribly enthusiastic just now. Hey ho, never mind!
By Colin Ashton - February 22, 2017