Vapnatark. A grand day out.

Well, I went to Vapanatark in a York on Sunday. We stayed at the Marriott just over the racecourse from the venue the evening before so there was no pressure to get up at silly o'clock and I was able to have a bit of a lie in and a nice breakfast, which is always a bonus.

Katherine dropped me off at about 10:15 before heading back to the hotel spa for a few hours of pampering. There was no queue at the venue but inside the place was pretty busy. By late morning I'd say it was heaving, and it probably stayed that way till well after midday. Of course, using a wheelie-walker meant I was able to pick my route through the crowds and 'accidentally' run over the fewest number of punters possible in order to get round. I didn't get to go round the bring and buy or whatever it was called as it was a nose to back sea of humanity whenever I tried to take a look.

I can't really comment on the games as I know I didn't get round all of them, and only took a couple of photos of one of those that I did see. I have to say, in MY opinion, that with the exception of the WW1 Seige of Kut game on the ground floor which was very pretty and they were actually playing it, that the rest of the games on show were disappointing, some more worthy of a club night game than a prestigious wargames show. There were a couple of interesting looking fantasy-cum-Warhammer games but they're not my thing although the guys playing were having fun and some of the modelling, especially on the one that looked like a battle between Lizard,en and Conquistadors was pretty good. There was a really nice looking ECW (Covenanters on one side) game with some nicely modelled terrain and lots of colourful regiments on display. I walked past at about 10:30 and thought , " mmmm that looks interesting, I must come back and see how it develops" but when I did my final swoop (sorry, trundle) before leaving at 2:30 I remarked to the now plucked, preened and waxed wife that the troops were exactly where they'd been four hours ago! 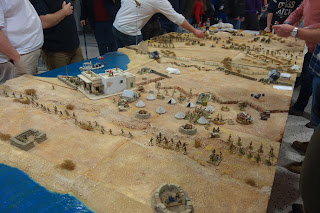 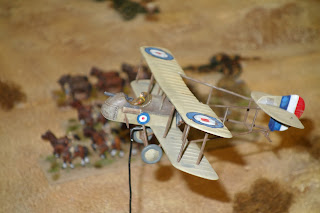 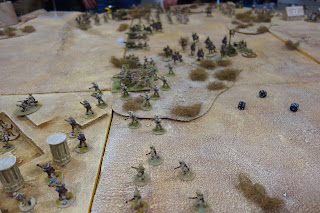 In terms of loot, I was very good this time and only collected some pre-ordered French Revolutionary Wars English off Reiver Castings and I made the usual stop off to replenish my stock of mdf bases at Warbases. That was pretty much it. Now, had I been carrying a long shopping list around I wouldn't have been disappointed as there were  lots of traders, all the usual suspects in fact. I could have bought much more on the day but the internet is a wonderful thing!

The best part of the day was catching up with loads of friends and acquaintances from both near and far as well as striking up conversation with numerous others whilst battling for somewhere to sit in the cafeteria area. There are some friends (some of very many years standing) who I might not see from one show to the next, or even longer, but within minutes it's like there's never been a break as we talk about our vast collections of little men and our current/next game or project. I did miss a few people though, either due to their absence or because we passed like ships in the night.

Overall, the show met my expectations and more importantly, met my needs, especially from the social point of view.
By Colin Ashton - February 07, 2017