The Anglo-Russian expedition to Holland

Now I know just about everyone will know about this totally obscure and pointless campaign......or maybe not. As an advocate of wargaming utterly pointless and obscure conflicts this was one I had to consider, especially as I am already well on track to complete my 1799 Suvarov in Northern Italy and Switzerland project and therefore have copious amounts of Russian and French figures readily available for a rapid deployment to the windswept and waterlogged wastelands of North Holland.

The English 🇬🇧 were keen to descend upon the Netherlands 🇳🇱 and sought assistance from Russia's  Czar Paul 🇷🇺 who agreed, probably/certainly influenced by a fair bit of cash, to send a corps to join the English in this venture, aimed partly at removing the Dutch fleet from the scene by seizing it and taking it back home, or burning it, delete as applicable. The British didn't really have a plan, and according to Fortesque, didn't even know, or couldn't agree, where to invade, beyond the general objective of 'The Netherlands'.

Skipping over the details of the campaign until a later post, there are some interesting facts about the expedition that make it well worth wargaming, well in my opinion at any rate, as follows:

1. When they finally agreed on where to land, the British army conducted an opposed amphibious landing onto the beach at Callantsoog;
2. Many of the British regiments contained a significant number of drafted in Militia and Fencibles , were short of officers and were thought to be barely trained to a standard suitable to be sent on campaign;
3. There were exceptions, e.g. The four battalions of Guards and Major General not yet Sir John Moore's brigade (2/1st Foot, 25th Foot, 49th Foot, 79th Foot and 92nd Foot) but generally the quality of the English/British infantry was certainly not as good as it had been in the American Revolution and would become in theNapoleonic War;
4. The English commanders included such notable figures as the grand old Duke of York (mmm?), John Moore, Ralph Abercrombie, Eyre Coote and others. There were a fair few numpties like Harry Burrard, Lords Cavan and Chatham and HRH Price William to balance things out;
5. There are a fair number of battles to refight on the tabletop, and the prospect of fielding British and Russians on the same table is quite a fun one;
6. Liaison between the Allies was pretty non existent, contributing to the failure of the campaign and their evacuation, and was not helped by the fact that the Russian commander was a bit of a knob who managed to get himself captured;
7. The Russians were not made of the same stuff as those fighting in Switzerland.
8. It looks fun.

I now have the start of my British contingent. I'm intending to field the Guards brigades made up of the 1st Foot Guards and a massed Guards grenadier battalion in one and the 2nd and 3rd Foot Guards in the second. I'm also in the process of putting together Maj-General John Moore's brigade, comprising 2/1st Foot, 25th, 49th, 79th and 92nd Foot, the whole supported by a couple of batteries of artillery and cavalry.

So, here the first completed units. Most of these were painted for me but some are my work and as always I did all the basing. Almost all the figures shown are Reiver Castings, with the exception of the light dragoons, the cannon, and a few odd figures that are Trent. 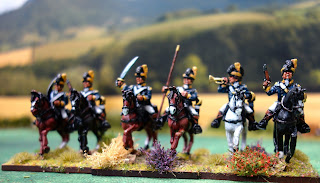 10th (I think) Light Dragoons. I'm waiting for a guidon off Maverick Models. 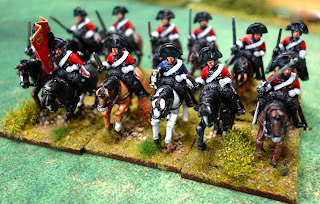 Kings Dragoon Guards. Now, I know now that no British heavy cavalry served in Holland in 1799, or even in the earlier Flanders campaign, but (a). I'd already bought the figures, (b) I like them, and (c). why not? 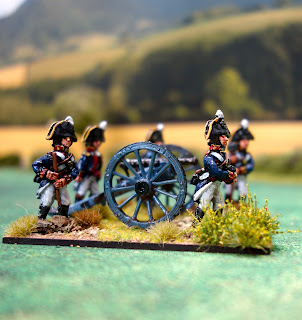 The grenadier and light companies will be stripped out to form a separate 'elite' battalion as was common practice. Certainly that happened with the grenadier companies of the Guards, whether their parent battalion was part of the expedition or not I believe.