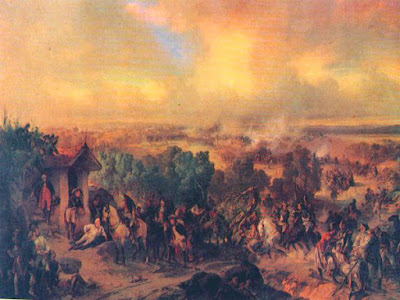 Tomorrow Paul is coming over and we shall be refighting the Battle of Trebbia, 17-19 June 1799, when an Austro-Russian army successfully crossed the River Trebbia and attacked  and defeated a French army under General MacDonald. Well, my version anyway, as I shall be compressing the three days of fighting into just one.

The great Russian Marshal Suvorov commands a combined Austro-Russian army against a French Republican force under General MacDonald. Both sides are roughly equal. Both sides have attack orders. It ought to be fun. I'm using Black Powder with some house rules to give them more of a FRW flavour. The sides have been scaled down on roughly a 1:3 basis, with wiggle room to allow for what I actually have in my collection.

Melas will act as CinC for the Austrian right hand column and the reserve. Suvorov can intervene if necessary but he will have his hands full.
FRENCH ARMY

Commander in Chief: General Jacques  Joseph Alexandre MacDonald (6)
low rating as he was ill suffering from wounds received less than a week beforehand