The premise for this game was however slightly different and wasn't a straight horse race. There would be three of four French commands, each of between four and six squadrons of horse or dragoons (the better the troops the few squadrons). They were ordered to fight through the defending Spanish and Dutch troops and get to the bridge in the distance. The bridge was representing the sluice gates, which once opened would flood the area between the two rivers crossing ng the table. I played the defenders.

The other objective, which was where there was scope for lots of skulduggery and overt interference in each others' commands, was to collect as many of the objective markers as possible (each representing a potential new mistress for the King, or in some cases a less useful personage).


Movement was dictated by playing cards, each command being represented by one of the suits, which when drawn would allow the player to move all or as many units as they wished. Obviously this meant that some players had to sit around for a bit until their suit was drawn, but then they would no doubt get a 'run' of cards thus balancing things out. There was also a deck of random event cards, ranging from gaining a unit an extra turn, upgrading the quality of one squadron or even a unit of the enemy. (These cards were kindly sent to me by Barry Hilton). As was an added fun element, if a joker was drawn then the destruction of the sluice gates would be speeded up. The second joker would see them opened, at which point the game was over. 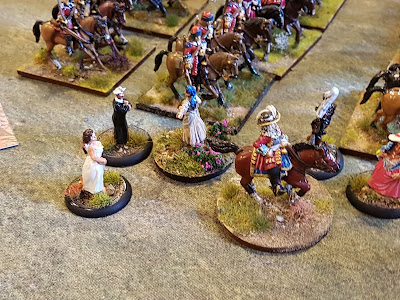 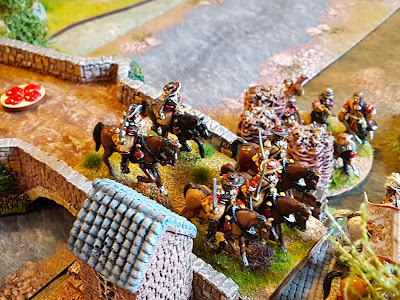 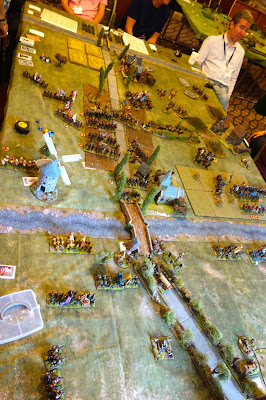 After much manipulation of the cards (not really) we managed three runs at the game over the weekend, using back of a postcard in my head rules which worked well). In every case the players took to the spirit of the game, and spent as much time charging hapless Spaniards and Dutchmen as they did trying to scupper the plans of their comrades in arms while scooping up fallen women, courtesans, and the odd surprise, e.g. Sister Josephine). The bridge was reached by one player each game, but none were able to stop the sluices from being opened, so the Umpire won. Yeah!

The largest number of objective markers, i.e. the aforementioned women etc was collected by Tim, while Gavin did well but had the honour of collecting some dodgy blokes along the way that didn't count in the scoring.

A fabulous weekend and after some uncertainty quite a good game. I was voted the 'best looking game' by the guys so I can feel pretty chuffed. My prize was a lovely painting by Chris Gregg depicting one of the Wild Geese in the Seven Years War. Thanks also to everyone for the great book gift and to Paul and Tony for their gifts too. Hope I've not missed anyone out.